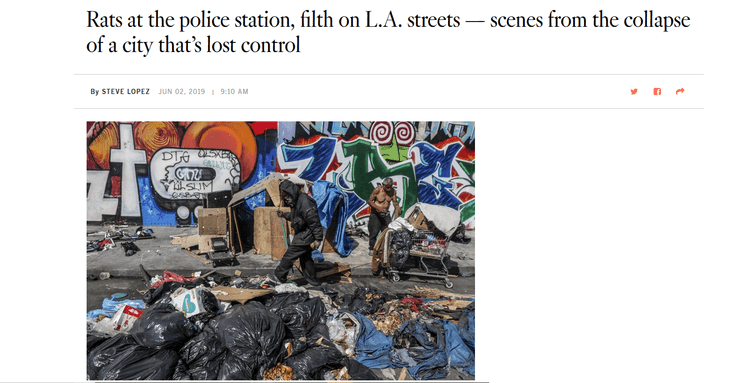 California Governor Gavin Newsom recently tweeted: “There’s only the California Dream, attainable and aspirational. Around the world it’s a beacon light. Mark my words, California—we are the light at the end of the tunnel.”

Unfortunately, if recent headlines are any indication, that tunnel is infested with rats and typhus.

We’ve got thousands of people huddled on the streets, many of them withering away with physical and mental disease. Sidewalks have disappeared, hidden by tents and the kinds of makeshift shanties you see in Third World places. Typhoid and typhus are in the news, and an army of rodents is on the move.

[Rats at the police station, filth on L.A. streets — scenes from the collapse of a city that’s lost control, June 2, 2019]

The homeless problem has gotten so bad, there is a rodent infestation at the Los Angeles City Hall. The homeless are using the metal grates nearby to relieve themselves, dispose of needles and human waste, and other things that attract rodents. [Filth from homeless camps is luring rats to L.A. City Hall, report says, by Dakota Smith and David Zahniser, Los Angeles Times, June 3, 2019]

San Francisco used to be seen as a kind of city of the future, the home base of the great tech companies that were going to propel the American economy. However, the homeless crisis has devolved, in the words of the Observer’s Chris Roberts, “from international embarrassment to ungodly humanitarian crisis”. [How California’s Homeless Crisis Grew Obscenely Out of Control, May 30, 2019]

Yet there’s another factor behind all of this, unmentioned by everyone—immigration.

California used to be a middle-class paradise. Land was cheap, rent was low, housing was widely available. Wages were high. In a review of Kevin Starr’s Golden Dreams: California in the Age of Abundance: 1950-1963, Benjamin Schwarz writes,

Starr consistently returns to his leitmotif: the California dream. By this he means something quite specific—and prosaic. California, as he's argued in earlier volumes, promised "the highest possible life for the middle classes." It wasn't a paradise for world-beaters; rather, it offered "a better place for ordinary people." That place always meant "an improved and more affordable domestic life": a small but stylish and airy house marked by a fluidity of indoor and outdoor space ... and a lush backyard—the stage, that is, for "family life in a sunny climate…”

To a Californian today, much of what Starr chronicles is unrecognizable...

This was also a time when immigration enforcement was strong. It was President Dwight D. Eisenhower who drove illegal immigrants back across the border. With a tight labor market, controls on immigration, and a primarily European-American population, there were high wages, high quality of public services, and no strain on infrastructure.

Before the rise of the New Left, when problems like homeless hordes arose, action could be taken to solve the problems without being sued by all in sundry. Because a more homogenous population produces higher social trust, as Robert Putnam found, public goods like pools, parks, libraries, and schools are communal assets that local people feel invested in and want to take care of. In racially and ethnically diverse communities, that doesn’t happen.

The key thing that Governor Newsom said that really struck me was “attainable.” If there’s one thing that’s not in California anymore, it’s an “attainable” middle class existence for the average person. That’s what used to define California. But because of Big Business’s demand for cheap labor, especially the major agricultural concerns in California, there’s been a huge influx of illegal immigrants into the state, completely transforming it. Now, simply because of population growth, there is a housing crunch, a strain on infrastructure, and a collapse of the political culture capable of dealing with these issues. Worse, California is also playing host to some of the most radical left-wing movements which prevent us from talking about issues such as immigration like rational human beings.

And yet, as anyone who has been there knows, California still has parts that look like paradise. It still has so much potential. It is still worth fighting for. But what is worth fighting for is that idea of California as the great Golden State of middle-class opportunity. That requires, as a first step, controlling immigration. And that can’t happen if California continues to be ruled by the state’s current Democratic party, a party defined by an almost religious dedication to unlimited immigration. They don’t get it and they won’t change. Even when their cities are consumed by filth, and their very halls of power are taken over by rats.