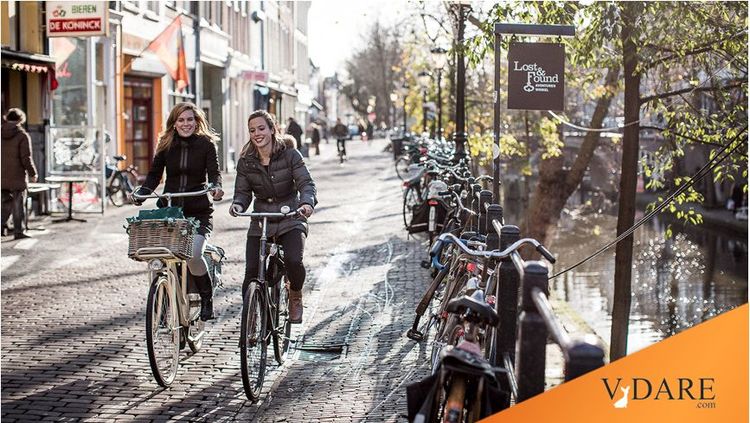 Why We Can't Have Nice Things: Boston Bicycle Advocate Visits Amsterdam And Complains Dutch City Planners Focus On Needs Of Dutch Cyclists Rather Than On Bike-Hating People Of Color

From StreetsBlog, which pushes for mass transit and bike routes:

Guest Column: Europe’s Bike and Transit Systems Are a Marvel, But Only For Some

This does not appear to be a parody: the author made some of the same points in her Twitter feed.

During a recent six-day study tour with a group of climate grantmakers and advocates in Amsterdam and London,

Amsterdam, perhaps with Copenhagen, is the safe urban bike-commuting capital of the world. So, American advocates of cycling like Jacobson visit it to learn its lessons. But one of its big lessons—the advantages of majoritarian utilitarianism—are downright un-American these days.

I marveled at the frequent and fully functioning rail, in contrast to my frustration with the T. The vast, connected networks of protected bike lanes, navigable without fear of Boston drivers or cavernous potholes.

… And yet, throughout the trip, I began to notice gaps in the way transportation solutions were planned. One key takeaway for me was that their approaches were not sufficient for the future of cities in the United States—and that we need to build and improve upon them.

On the Barr Climate team, we have an explicit value of centering racial equity in our work. So naturally, thinking about who we plan for—and who continues to be left out— was top of mind for me and our study group.

But, we found that consistently asking ‘for whom’ was absent from much of the context and information we were given. We pressed our hosts with questions about who they are prioritizing in their planning and why, and the answer was often, “well, everyone.”

This is problematic, as it continues to leave people out who have already been excluded many times over.

…This is in contrast to U.S. transit planning where equity analyses are required, riders and neighbors can participate in a process, and transit agencies are called out if they don’t (rightly so) prioritize communities most impacted by air pollution and poor transit service.

…And back in Amsterdam, biking is so ingrained in Dutch culture that more than two-thirds of residents commute by bike. If you are born and raised in Holland, you bike. If you are an immigrant, or a child resisting cultural norms, you might not, and you are excluded, especially if you ride a moped or walk.

“Pedestrians in Amsterdam don’t exist,” said one of our speakers.

Although Europe is making far more headway reducing greenhouse gas emissions than the United States, we can’t follow their lead in how they got there. From what I observed, people of color, immigrants, and low-income people are not prioritized in decision making in these two cities. Climate, impeccable design, and engineering are.

These cities have built exceptional infrastructure for the dominant culture, and that is much of what American tourists experience on their visits.

Throughout the study tour, we heard phrases like “I don’t see color”, and “we are taking care of those people so their voices aren’t needed at the table”. These “color-blind” approaches continue to leave people out and are not going to address the stark racial inequities in our society.

When measuring “success” in transit reliability, separated bike lane miles, or air quality, the U.S. is far behind our European counterparts. I’ll posit that some in the U.S. are inching towards doing better — by centering people most impacted in our planning.

Many city planners, advocates, and funders here are recognizing that we have done a poor job listening and providing for vast segments of our communities — and they know that a change is far overdue. Many of my companions on the study tour who have founded, lead, and work for community-based organizations that focus on environmental justice have been doing this work for a long time.

They aren’t getting much accomplished, but Centering the Marginalized is a living, so whaddaya whaddaya?

This experience for me underscored how essential it is to heed to climate justice organizers and the communities they serve. In the long run, we’ll have much better success if we continue to shift the power balance and truly account for who is and isn’t being served well by our transportation systems. None of this is easy, but we must correct our past and create a just transportation future.

By the way, you want to know the one thing uglier than an American car parking lot? I’d never seen that many bicycles in one place. The Dutch really are good at getting all the Dutch to ride bikes.