USA TODAY OpEd: Trump Should Tackle Automation (Like VDARE.com Has Been Saying Forever)

It’s a rare thing to see Washington suits speak up about the coming automation revolution in the workplace, so the recent opinion piece in USA Today is welcome. The writers are not exactly household names in the heartland, but a statement by Penny Pritzker, former Secretary of Commerce, and John Engler, former Governor of Michigan, is a step in the right direction. They emphasize the importance of increasing technical education, a strategy that is certainly needed to cope with the coming changes in work. Many repetitive-movement jobs will go the way of the Model-T, but new employment opportunities will be created that require appropriate retraining.

Below, students learn skills suitable to the modern workplace at the Tennessee College of Applied Technology. 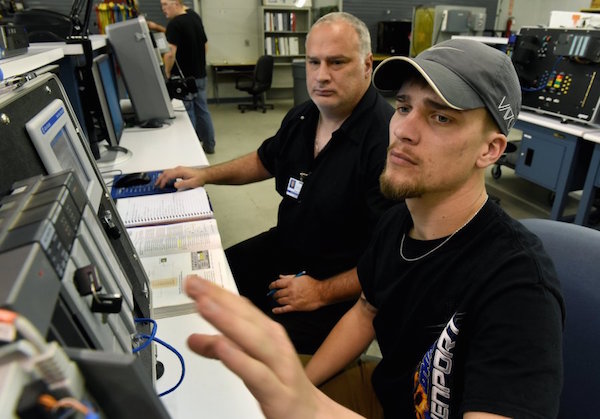 In addition to instituting technical training for workers, we should also face up to substantial job loss caused by robots in sectors like manufacturing and agriculture. As a result of huge numbers of low-skilled jobs being taken by smart machines, it makes no sense to continue importing third-world immigrants at 20th century levels.

Trump’s tariffs miss the mark. Our central economic challenge is automation, not trade. It’s changing millions of jobs, and we need people who are trained to do them.

The Trump administration has threatened massive new tariffs against China, promising that protection against imports will bring greater fairness and prosperity to our economy. But these actions will harm more Americans than they help — driving up consumer prices, increasing costs for manufacturers, and threatening to trigger a still more damaging trade war.

On top of that, this approach misses the mark. The nation’s central economic challenge is not trade. It is the rapid pace of technological change — through automation, robotics and digitization — that is changing millions of jobs and has left too many Americans on the margins.

We believe there is a better way. In our new Council on Foreign Relations report on the future of the U.S. workforce, we argue that for more than 30 years our leading institutions — governments, companies, and educational and training systems — have failed to equip many Americans with the skills they need to succeed in the 21st century economy.

The crucial task facing the United States is to rebuild the links among work, opportunity and economic security in the face of accelerating technological change and global competition. Continued failure to address this challenge will amplify the pressures for retrenchment that are causing our country to back away from its historic global leadership.

The pace of workplace disruption is accelerating. Just with existing technologies, in about 60% of occupations, nearly one-third of employees may need to change jobs or develop new skills over the next decade, according to McKinsey Global Institute.

We are not facing a jobless future; indeed many companies complain of labor shortages. Smarter machines will replace some kinds of work, but they will also open up all sorts of new jobs. There was no such thing as a Web developer until the early 1990s, and in 2016, 163,000 Americans did that job at a median annual salary of $66,000.

But a better future is only possible if we prepare Americans for the jobs that are coming. Education and training need to be linked more closely to emerging careers, and with the growth of “gig” and part-time jobs, benefits must match the way we work.

Our bipartisan group offers a road map to address these challenges. We recommend measures to sustain U.S. technological leadership, boost job creation in struggling regions, streamline occupational licenses and other barriers to mobility, and offer more effective help — based on the best global models — for mid-career workers who lose their jobs.

Two pieces are especially important. The first is to make a clearer path from education to better work opportunities, and make lifelong learning a cultural imperative. U.S. success in the 20th century was built on education: We were the first country to make universal high school a reality, and then moved millions of students into the best colleges and universities in the world.