In 2012, the FBI arrested two Pakistan-born brothers for plotting to bomb New York City, a popular target among diverse jihadists. They pleaded guilty to charges in March and on Thursday received the maximum prison sentences. 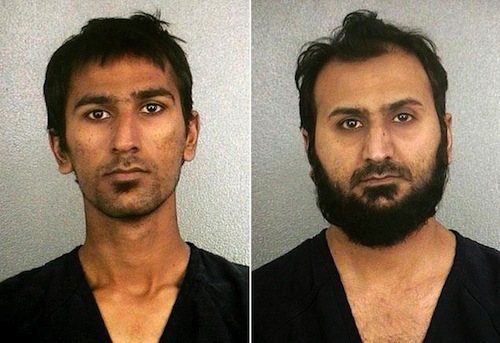 A Florida news report on the sentencing noted the tough sentence and how Judge Beth Bloom declared, “You are terrorists — evil in your intentions and evil in your deeds and a just sentence must follow.” The reported also mentioned that this case was the 54th plot foiled since the 9/11 attacks. (The Heritage Foundation puts the number at 69 during the same time period.)

America is home to 307,855 Pakistan-born persons, according to a 2011 accounting, most of whom are presumably Muslims. Some of them have already gone jihad, including the wife-beheader Muzzammil Hassan, Times Square attempted bomber Faisal Shahzad, and the Hayat family of Lodi, to name a few.

Why admit potential enemies at all? Immigration is a privilege, not a right. In WWII there was no immigration of Germans or Japanese under the Democrat President Franklin Roosevelt. Yet Washington acts as if America is not at war with hostile Islam, when hostile Islam has said in word and deed that it is at war with us.

Of course, not all Pakistani immigrants are jihadists or even support a worldwide caliphate, but it is culturally naive for our government to base its immigration policy on the idea that all diversity is equal. It isn’t.

The Qazi jihadists are naturalized citizens of the United States who resided in Florida, identified as “Broward County brothers” by the local newspaper.

Raees Alam Qazi, 22, who played the lead role in the conspiracy and cycled around Manhattan looking for bomb targets was sentenced to 35 years in federal prison. That is three years more than he expected under the terms of his plea agreement with the U.S. Attorney’s Office.

U.S. District Judge Beth Bloom told the Pakistani-born men they had taken advantage of the benefits of U.S. citizenship to plot violence and hatred against their fellow-Americans.

“You are a terrorist, evil in nature and evil in your deeds,” Bloom told Raees Qazi in court.

The judge also chastised Sheheryar Qazi for supporting “your brother’s devotion to al-Qaida.”

The men’s involvement in the terrorist conspiracy was “evil and reprehensible,” she told them.

Dressed in beige prison scrubs and handcuffed and shackled, both men were quiet and polite in court but declined the judge’s invitation to speak before they were sentenced.

Though federal prosecutors and the defense jointly recommended punishments of 32 and 17 years in prison under the terms of the plea agreements, those suggestions were not binding on the judge.

Bloom said the maximum permitted penalties were the appropriate punishments for the men.

The judge said the younger Qazi’s plan to set off a bomb in a crowded section of Manhattan around Thanksgiving 2012 was similar to the 2013 Boston marathon bombing. She praised the undercover investigation conducted by the FBI’s South Florida Joint Terrorism Task Force.

“That investigation, over many months, may have prevented what could have been the tragic loss of many lives,” the judge said.

The brief court hearing in federal court in Miami was held under tight security, partly because of the men’s terrorist crimes but also because of their attack on two marshals in April 2012 in the Miami courthouse complex.

The brothers distracted the marshals in a locked room and placed one of them in a chokehold while the other marshal was struck in the face. The judge said those crimes were also very serious.

The judge emphasized to both men that the U.S. had welcomed them and provided them with many opportunities and benefits when they moved here with their family in 2000. They were living in an apartment in the Sailboat Pointe community on Oakland Park Boulevard, rented by Sheheryar Qazi and his wife, when the brothers were arrested.

The men took advantage of educational benefits by attending public school and college classes in South Florida, the judge told them said.

The older brother also received treatment at medical centers here and his young son has benefited from taxpayer-supported pre-school, the judge said.

It is expected that the men will be moved from the Federal Detention Center in downtown Miami, where they have been detained in the highest-security section, to serve their punishments in the notorious “Supermax” federal prison in Florence, Colo.

A former prison warden called it “a clean version of hell.” Inmates there are held in much harsher conditions than in other U.S. prisons, with little human contact and very restricted access to anyone other than their guards.

Other “Supermax” inmates include Jose Padilla, another former Broward County resident who was convicted of terrorism conspiracy and support charges. He is serving a 21-year prison term.

Raees and Sheheryar Qazi have been locked up since Nov. 29, 2012, when the younger brother returned home to Broward County on a Greyhound bus. He had shaved his beard in preparation for setting off a terrorist explosion, according to prosecutors Karen Gilbert and Adam Fels, but ran out of money and equipment.

FBI agents who interviewed Qazi said he admitted coming home because he ran out of cash and wanted to do more training and experiment with bomb-making skills he learned from reading al-Qaida manuals online.

Assistant Federal Public Defender Daniel Ecarius and court-appointed lawyer William Barzee, who represented the men, said little in court and declined to comment after the hearing.

The brothers became naturalized U.S. citizens after moving to South Florida. The older brother worked as a cab driver in Broward County and the younger one repaired and sold bicycles and other items online and at the Swap Shop flea market. He also worked as a maintenance man at a local mosque, investigators said.