Trump In Phoenix: "Washington Democrats Put The Needs Of Illegal Immigrants Before The Well-Being Of American Citizens"

Now, I have to tell you that it worries me when a President elected on a platform of lowering legal as well as illegal immigration talks about "millions and millions of legal immigrants," but it's not a call for an increase in legal immigration.

His point here is that the first victim of a Mexican criminal alien in America is likely to be the Mexican legal immigrant who lives next door to him.

And here's Trump on illegal immigrants:

Before I came into office, the far left's policy of Open Borders allowed deadly drugs to flow freely into our country, poisoning our children, including, as you know very well, right here in Arizona. Washington Democrats put the needs of illegal immigrants before the well-being of American citizens.

The phrase "Washington Democrats" is carefully crafted—it means Chuck Schumer and Nancy Pelosi. It doesn't mean anyone in Arizona who used to vote Democrat, but is now on the Trump Train. 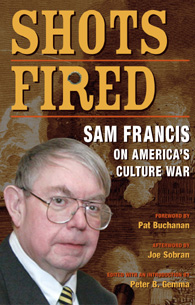 In 1999, David Brooks was shocked when he attended a Buchanan rally and saw American working men there. Pat, he said, drew to his rallies:

“…beefy, 300-pound guys with tattoos up their arms and sleeveless T-shirts. He draws the guys with shaggy biker beards, and the Teamsters who park their rigs in the lot and get hoarse chanting, ‘Go, Pat, go!’ It may be hard to classify exactly which political category these people belong to, but they are certainly not Republicans.” [Buchanan Feeds Class War in the Information Age, LA Times, October 31, 1999]

Actually, it's not so hard to classify which political category such people belong to. They're called 'Democrats,' and the contempt for them that our Mr. Brooks exudes helps explain why they never show up in the crowds around other Republican candidates. [Revolt of the 300-Pound Beefy Guys]

Those guys were "Reagan Democrats" in an era when the actual Democratic Party was suffering a spasm of anti-Americanism actually much milder than the one it's suffering today. Their sons are Trump Democrats, because Hillary thought they were "deplorable." Trump isn't attacking them.