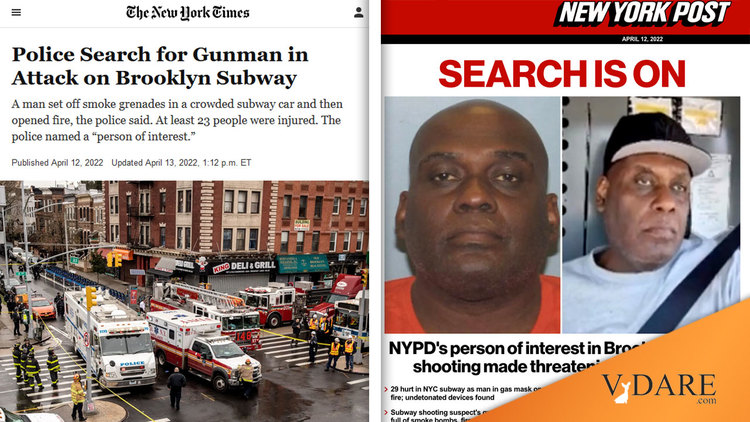 Now, you know and I know that the guy who shot up the New York subway this morning in Brooklyn (so far no dead, thankfully—Sailer’s Law of Mass Shootings apparently works even in this terrorist-style attack) was another Angry Black Man.

But do New York Times readers, many of whom live in New York and need to be on the lookout for this dangerous maniac on the run, know that? You’d have to read pretty deep into the NYT’s coverage to find a picture of the shooter.

Here are all the images that the NYT has posted higher up in their coverage than the picture of the wanted desperado. Neither video includes a picture of the wanted man. The NYT still can’t bear to use the word “black” to describe the gunman:

“We are endeavoring to locate him to determine his connection to the subway shooting, if any,” Chief Essig said.

He appeared to have posted dozens of videos on YouTube, where he riffed off news events in long, vitriolic rants. He blamed Black women for violence among Black people and pointed to Russia’s invasion of Ukraine as evidence that whites are genocidal.

Shortly before 8:30 a.m., the police said, a heavyset, dark-skinned man in a construction vest and construction helmet donned a gas mask as a crowded N train approached the 36th Street station in the Sunset Park neighborhood, tossed two smoke grenades on the floor of the car, and began firing the gun. Thirty-three shots later, he fled.

In contrast, if you go to NYPost.com: