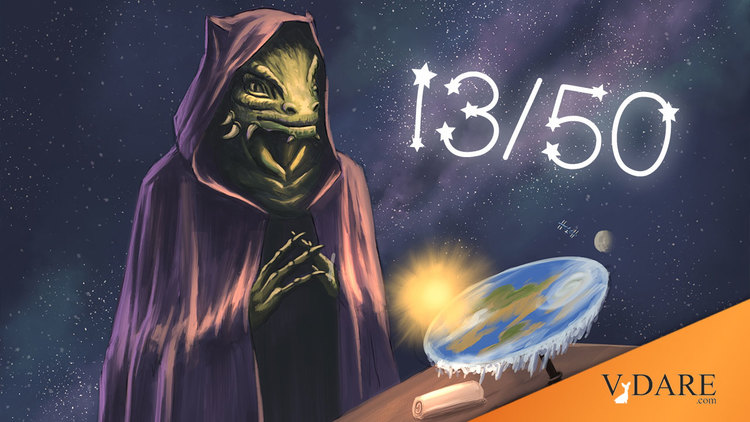 Earlier: Sailer In TakiMag: Who Is More Into Conspiracy Theories: The Right Or The Left?

On his Substack, Noah Carl asks “Is ‘systemic police racism‘ a conspiracy theory?“

Why does all this matter? The idea of “systemic police racism” has been extremely harmful – both to Americans in general and black Americans in particular.

As Steve Sailer (and more recently) Scott Alexander have shown, the George Floyd protests and associated claims about “systemic police racism” are by the far the most plausible explanation for the massive and sustained rise in murder since 2020, which has been concentrated among blacks. There’s also the $1–2 billion in property damage caused by the rioters, along with the communities that were destroyed.

Briefly, if police are interacting with blacks more than whites, it‘s not because of something the police are doing wrong.

Steve Sailer‘s Wednesday TakiMag column, The Truth Is Out There, on conspiracism generally has a list of

a whole class of woke conspiracy theories that our culture is suffused in that aren’t asked about in this study because virtually nobody ever dares point out that they are indeed conspiracy theories. Instead, they are considered prestigious findings of the social sciences, even though most of them are empirically dubious. For instance:

(1) Unarmed blacks are being murdered in huge numbers by racist police.
(2) Redlining denying loans to blacks is the reason their property values are lower.
(3) Predatory lending is the reason black property values are lower.
(4) Black crime rates are higher because of over-policing of black neighborhoods.
(5) America’s murder rate is high due to rural rednecks buying rifles at the sporting goods store.
(6) Black test scores are lower because of the systemic racism of white schoolteachers.
(7) Female entrepreneurs seldom found tech unicorns because venture capitalists hate women so much that they leave billion-dollar bills lying on the sidewalk.
(8) The AIDS crisis of the 1980s was the fault of Ronald and/or Nancy Reagan.
(9) Races don’t exist and they were concocted by Enlightenment scientists to promote racism.
(10) Huge numbers of people were assigned the wrong gender at birth.

And so forth and so on.