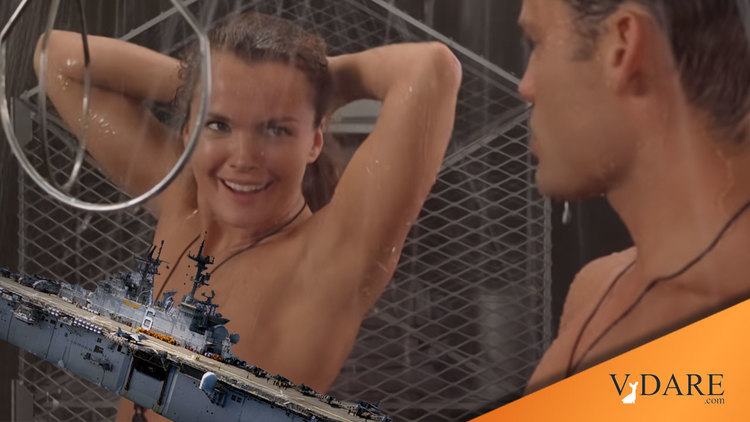 Steamy Goings-on Below Decks On The USS BONHOMME RICHARD

Yup, the US Navy is ready to fight China over Taiwan tomorrow: From the Daily Mail:

By JENNIFER SMITH FOR DAILYMAIL.COM

A female sailor who worked on the COVID Navy ship USNS Mercy dismissed the claims of the ‘bipolar’ seaman accused of torching the USS Bonhomme Richard after he told friends they were engaged until he dumped her for getting pregnant by another man.

Seaman Apprentice Ryan Sawyer Mays, 20, has been charged with setting the fire on board the Bonhomme last July. His attorney says he had nothing to do with it and he is awaiting a preliminary hearing. …

During a ten hour interview with Navy investigators, he told them that he’d been in a romantic relationship with Petty Officer Armelle Ane.

He said they were engaged, that he had proposed at a French restaurant, and that the relationship ran into trouble when she was deployed to the UNSN Mercy, a Navy hospital ship that was deployed to Los Angeles to help deal with the COVID-19 pandemic.

While in L.A., deployed on the Mercy, he told investigators that Ane became pregnant by another man.

Mays said it drove him to end their engagement and that he was ‘single’. He’d thought at first that he was the father, the report says. …

But in her interview with investigators the next day, Ane said he made it all up.

It’s unclear if the pair ever dated, but she emphatically told the investigators they had never been engaged, nor had she become pregnant by anyone.

She even said she took a pregnancy test to prove that he was lying, after he’d told their friends about her apparent affair. …

‘Ane described Mays as being volatile and “bipolar,”‘ the report reads.

For gossip about steamy goings-on in back rooms, the USS Bonhomme Richard sounds like a cross between the crew of a casual dining restaurant staffed by community college students and Paul Verhoeven’s Starship Troopers. Has the Navy installed coed showers yet?