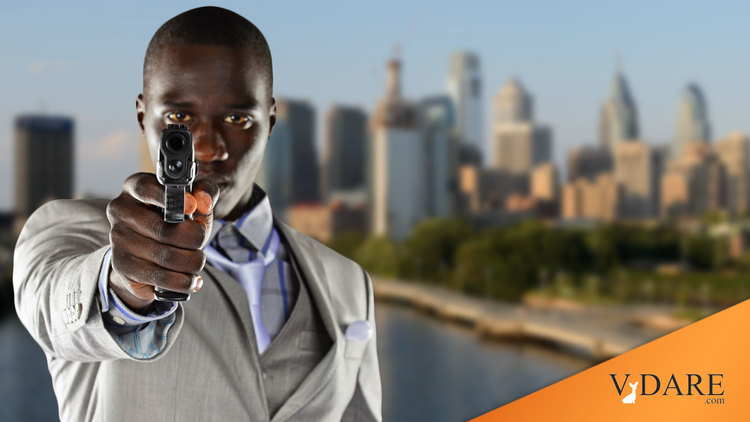 Earlier by Paul Kersey: BLM Gets Results: Philadelphia Sees 40% Increase In Killings In 2020 And Record Number Of Shootings

Philly’s gun-violence crisis has surpassed a bleak milestone with 10,000 shot since 2015: Even in a city that has long been plagued by violence, the epidemic of gun crime has hit a level unmatched in recent memory — a pace that began last summer and has persisted since., by Chris Palmer, Dylan Purcell, and Anna Orso, Philadelphia Inquirer, July 11, 2021

Philadelphia this past week surpassed another bleak milestone of bloodshed, as 10,000 people have now been killed or wounded in shootings in the city since 2015, the year police began routinely posting gun-violence statistics online. 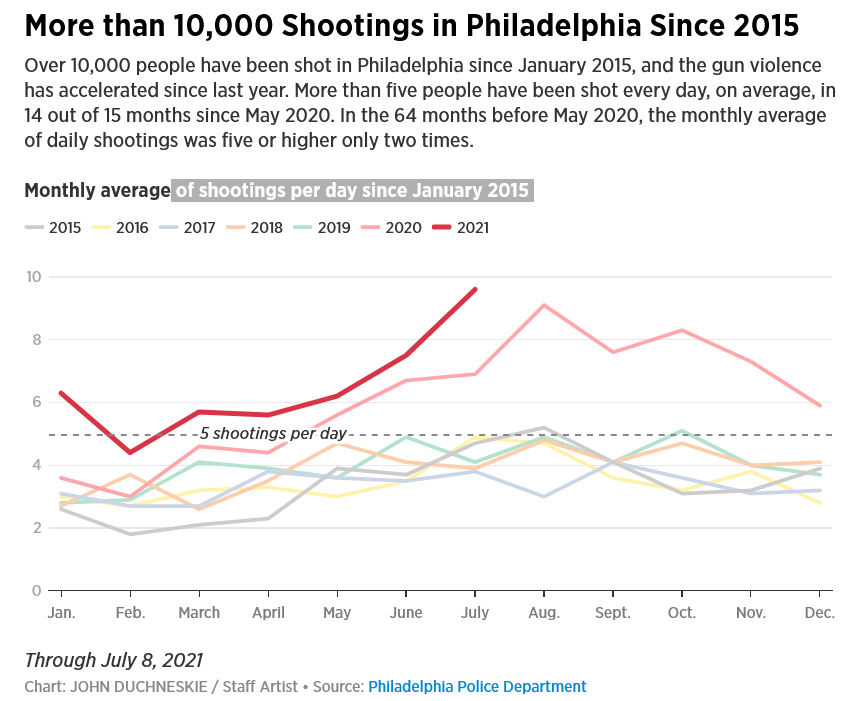 The mark was eclipsed during a week in which the city’s shootings crisis continued at an unrelenting pace. In the first eight days of July, 77 people were struck by gunfire, including a 63-year-old woman injured in a double shooting in Kensington, a 30-year-old man killed in a quintuple shooting in East Mount Airy, and a 16-year-old fatally shot in a North Philadelphia homicide that also left a 15-year-old wounded.

Even in a city that has for decades been plagued by violence, the epidemic of gun crime has hit a new level unmatched in recent memory — a pace that began last summer and has been unsettlingly persistent in the months since.

One example: Just past the midway point of 2021, only one day has passed without someone getting shot. But there have been 30 days in which 10 or more people have been killed or wounded by bullets — an occurrence that was a relative rarity as recently as two years ago.

The sustained surge has overwhelmingly hurt Black and brown communities and is evident by nearly any metric. The city’s midyear homicide total in 2021 — the vast majority of which were gun killings — was the highest in at least 60 years.

Criminologists also point out that homicides and shootings have surged across the country over the last year, a volatile time marked by COVID-19 lockdowns, an economic crisis, a national racial reckoning, and an accompanying debate over law enforcement’s role in society — all as gun sales skyrocketed nationwide. In Pennsylvania, state police reported an unprecedented volume of background checks for firearms purchases over the last year: nearly 1.5 million in total.

Lee and Chainey were like so many of the city’s gun-violence victims: young Black men from neighborhoods long deprived of services and opportunity.

Nearly 94% of the 10,000 people shot since 2015 were Black or brown, according to the city’s data. Three-quarters of the victims were Black males.

And though those under 18 have generally made up a small share of the victims, the number of youths killed or wounded has risen sharply in the last two years. Through Thursday, 21 of them have been fatally shot in the city in 2021 — more than the annual total in five of the last six years.

Why not just point out it’s black and brown individuals who collectively are responsible for committing almost all of the gun crime in Philadelphia? When 18 percent of white people live below the poverty line, yet so few white individuals commit gun crime in the city, the whole “poverty” angle behind the carnage disappears, right?

Since more than 94 percent of shooting victims are black or brown, it’s not hard to figure out that close to that number, or perhaps even a higher percentage of the individual pulling the trigger is black or brown. Why? Because of the high rate of black on white violence in Philadelphia.

But to point out who/whom is committing the gun violence and offer suggestions on how to end this carnage (ultimately saving black and brown lives in the process0 is the height of racism.

Why is there so little gun crime committed by whites in Philadelphia, when 18 percent of the white population lives below the poverty line? Sometimes, the question produces quick answers undermining every egalitarian lie holding aloft the 21st century in America.