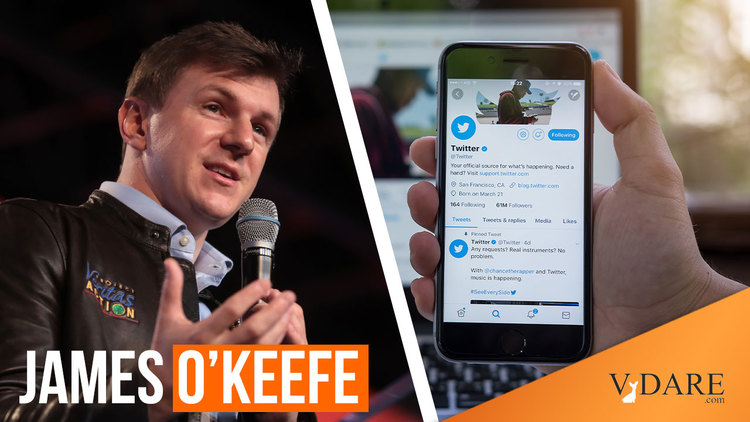 Project Veritas's O’Keefe Suing Twitter For Defamation—The Reason It Banned Him Was A Lie, Just Like Facebook's Ban Of VDARE.com

Supporters of O’Keefe say that the company removed his account as retribution for his most recent “exposé” involving surreptitious recordings of a CNN employee admitting the news organization has a political bias. (The person he was talking to had, impersonating a nurse, matched with him on Tinder.)

For his part O’Keefe said he would be suing Twitter for defamation over the allegation that he operated fake accounts. Chief Legal Officer Jered T. Ede told TechCrunch that “James O’Keefe has only one account. He does not have fake accounts. Twitter’s statement is simply false.”

A story from Forbes has more details about the lawsuit:

James O’Keefe, the right-wing founder of Project Veritas, filed a defamation lawsuit against Twitter Monday afternoon, claiming the social media giant falsely accused him of operating fake accounts when it permanently banned him from the platform last week.

In a legal complaint Project Veritas says was filed Monday, O’Keefe said he didn’t operate fake accounts, insisting Twitter’s statements on his ban are “extremely damaging to his reputation” and undermine his investigative work.

The suit also speculated that Twitter banned O’Keefe “in order to distract and detract from” embarrassing hidden-camera videos Project Veritas had posted of a CNN staffer (the legal complaint didn’t point to any hard evidence).

“The false accusation that Mr. O’Keefe operated ‘fake accounts’ is particularly damaging for Mr. O’Keefe because Mr. O’Keefe is a journalist,” the complaint read. “As such, his reputation for transparency and accurate reporting is fundamental to his profession.”

O'Keefe responds strongly at his own ProjectVeritas.com site:

“I am suing Twitter for defamation because they said I, James O’Keefe, ‘operated fake accounts.’ This is false, this is defamatory, and they will pay. Section 230 may have protected them before, but it will not protect them from me. The complaint will be filed Monday.”

VDARE.com has been banned from Facebook on a similarly false claim of "fake accounts." We are about to sue Facebook on exactly the same theory that O'Keefe is suing Twitter.

We wish him all the best.

And we will be grateful for any support you can give our Legal Defense Fund.