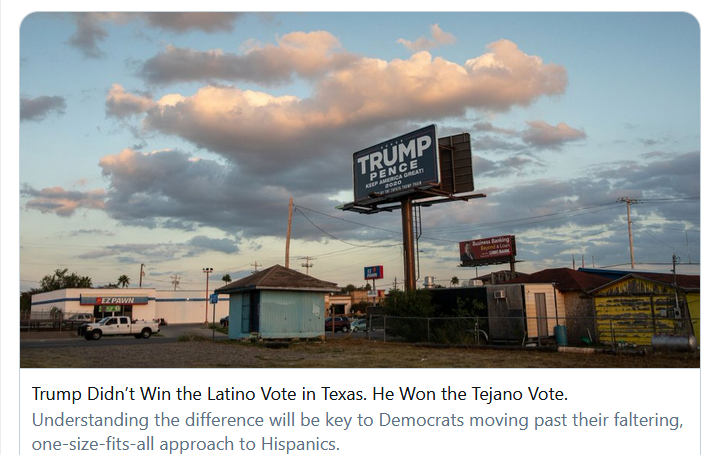 Politico ran an interesting article, published November 17, entitled Trump Didn’t Win the Latino Vote in Texas. He Won the Tejano Vote. It's written by Jack Herrera [Tweet him] "an independent immigration reporter, an Ida B. Wells Fellow with Type Investigations and an elections correspondent at Prism."

It's an interesting article, about Trump's electoral success in three majority Hispanic border counties of Texas (Webb, Zapata and Starr).

Of all the results from the November 3 election, few drew as much attention from national political observers as what happened in a quiet county on the banks of the Rio Grande. Donald Trump became the first Republican presidential candidate to win Zapata County’s vote in a hundred years. But it wasn’t its turn from a deep-blue history that seemed to be the source of such fascination but rather that, according to the census, more than 94 percent of Zapata’s population is Hispanic or Latino.

Zapata (population less than 15,000) was the only county in South Texas that flipped red, but it was by no means an anomaly: To the north, in more than 95-percent Hispanic Webb County, Republicans doubled their turnout. To the south, Starr County, which is more than 96-percent Hispanic, experienced the single biggest tilt right of any place in the country; Republicans gained by 55 percentage points compared with 2016. The results across a region that most politicos ignored in their preelection forecasts ended up helping to dash any hopes Democrats had of taking Texas.

The city of Laredo is the county seat of Webb County.

To many outsiders, these results were confounding: How could Trump, one of the most virulently anti-immigrant leaders, make inroads with so many Latinos, and along the Mexican border no less?

The rest of the article explains why.

In Zapata, however, these questions have been met with mild chuckles to outright frustration. The shift, residents and scholars of the region say, shouldn’t be surprising if, instead of thinking in terms of ethnic identity, you consider the economic and cultural issues that are specific to the people who live there. Although the vast majority of people in these counties mark “Hispanic or Latino” on paper, very few long-term residents have ever used the word “Latino” to describe themselves. Ascribing Trump’s success in South Texas to his campaign winning more of “the Latino vote” makes the same mistake as the Democrats did in this election: Treating Latinos as a monolith.

And the Latino population is not a monolith.

Ross Barrera, a retired U.S. Army colonel and chair of the Starr County Republican Party, put it this way: “It’s the national media that uses ‘Latino.’ It bundles us up with Florida, Doral, Miami. But those places are different than South Texas, and South Texas is different than Los Angeles. Here, people don’t say we’re Mexican American. We say we’re Tejanos.”

Though not everyone in the Rio Grande Valley self-identifies as Tejano, the descriptor captures a distinct Latino community—culturally and politically—cultivated over centuries of both Mexican and Texan influences and geographic isolation. Nearly everyone speaks Spanish, but many regard themselves as red-blooded Americans above anything else. And exceedingly few identify as people of color. (Even while 94 percent of Zapata residents count their ethnicity as Hispanic/Latino on the census, 98 percent of the population marks their race as white.) Their Hispanicness is almost beside the point to their daily lives.

I served many years in a National Guard unit in a Texas border town. It was overwhelmingly Hispanic, and I would consider most of them as racially white. Many Guardsmen were in, or aspired to be in, the Border Patrol or Customs.

In the end, Trump’s success in peeling off Latino votes in South Texas had everything to do with not talking to them as Latinos. His campaign spoke to them as Tejanos, who may be traditionally Democratic but have a set of specific concerns—among them, the oil and gas industry, gun rights and even abortion—amenable to the Republican Party’s positions, and it resonated. To be sure, it didn’t work with all of Texas’ Latinos; Trump still lost that vote by more than double digits statewide, and Joe Biden won more of the nationwide Latino vote than Hillary Clinton did in 2016. But Trump proved that seeing specific communities as persuadable voters and offering targeted messaging to match—fear of socialism in Miami-Dade’s Venezuelan and Cuban communities, for example—can be more effective than a blanket campaign that treats people as census categories. And in the end, it was enough to keep Florida and Texas in his column. If the Democratic Party’s 2020 postmortem for Texas—indeed, for the whole nation—goes only as far as to try to increase their appeal to “Latinos” as an undifferentiated bloc, they’re going to experience even harsher losses in the next election.

It's a rather long article, so let me just list factors listed that appear to explain why a high percentage of Tejanos in the region voted for Trump:

What about Trump's rhetoric about illegal aliens?

While many Trump supporters in South Texas... have Mexican roots and say they can understand how the president’s crude and derogatory language might seem divisive to some, few of them hear the president talking about them when he makes comments about Mexicans. “I think when people say they don’t like Mexicans, to me it means a Mexican citizen, or a Mexican national, who has crossed illegally,” says Barrera, the Starr County Republicans' chair. “And then again, not all Mexicans look alike. So when they say they don’t like Mexicans, I don’t think it means me. … It means a Mexican national who has broken the law.”

The article quotes Yvonne Trapp, Trump supporter, who said that "I see myself as just an American. Growing up, I never knew that Hispanics were another race, that we were brown. Everybody just put white—not that it matters. Our culture is one thing, but we were just Americans. "

Leroy Cruz, who manages a car-detailing business out of his garage with a Trump flag close by, had some interesting things to say:

It's an interesting article.

One other factor that isn't explicitly pointed out is that people who live on the border are more likely to be aware of border problems. And these three counties are on the border.