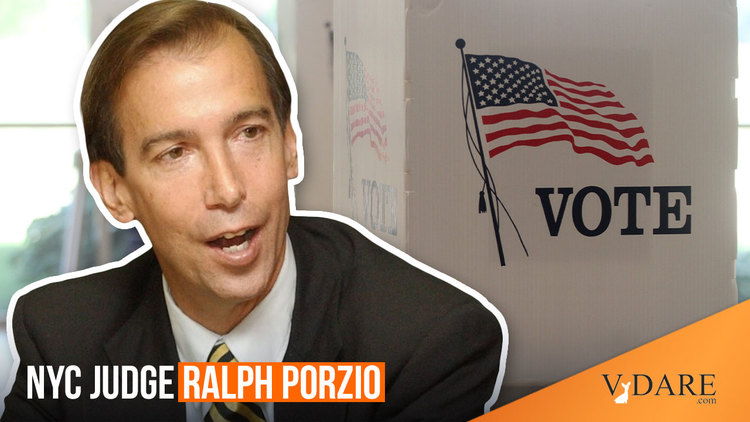 @AP: A judge on Monday blocked New York City from letting noncitizens vote for mayor and other municipal offices, a measure that Republicans had challenged as unconstitutional. https://t.co/XCXAD1Dmpa

In January, the city council in all its wisdom decided that permitting non-Americans to help settle public policy was just what the polyglot metropolis needed. Porzio, pursuant to a GOP challenge, said not so fast.

“Though voting is a right that so many citizens take for granted, the City of New York cannot ‘obviate’ the restrictions imposed by the Constitution,” Porzio wrote. Thus did he block 800,000 noncitizens, including illegals, from voting.

As the son of immigrants that came to this country legally and worked tirelessly to become citizens, I consider voting to be a sacred right bestowed on American citizens.

The Big Apple branch of the Treason Lobby wasn’t so happy:

The city said it was considering next steps.

“This is a disappointing court ruling for people who value bringing in thousands more New Yorkers into the democratic process,” the city Law Department said in a statement.

Immigrant rights advocates decried the ruling and were looking ahead to a potential appeal.

“The decision strikes at the core of our democracy and values as a city of immigrants,” said Ahmed Mohamed, the legal director for the Council on American-Islamic Relations’ New York chapter.

Recall that CAIR was an unindicted coconspirator in the Holy Land Foundation terror funding case, so we can ignore Mohamed’s evaluation of “our democracy.” His religio-political ideology is incompatible with “our democracy,” and if and when things are put right in this country, we won’t allow Muslims to become citizens, much less vote in elections or run for public office.

That aside, the case proves that our side can win if it will only fight.