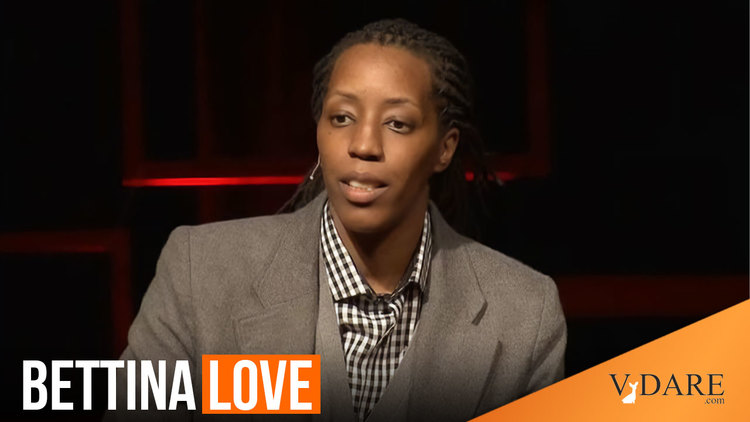 We've been putting "Abolishing America" in our headlines for years, but I don't think National Review's Stanley Kurtz [Email him] has been reading us--I think he's just caught up with us, and started Noticing what's going on:

If you care about the battle over critical race theory (CRT) in the schools, you need to know about Bettina Love. The Biden administration recently got caught promoting a guidebook from her group, the Abolitionist Teaching Network (ATN). The booklet asks teachers to “disrupt Whiteness and other forms of oppression.” Following that revelation, the administration disavowed ATN and claimed that touting its program had been an “error.” Almost certainly, however, Biden’s support for Bettina Love’s ATN was no slip-up. Bettina Love is all the rage among progressive educators (i.e., the entire education establishment), including leading members of Biden’s Education Department. Love may be less well known to critics of CRT than Ibram X. Kendi, Nikole Hannah-Jones, or Robin DiAngelo, but that is our mistake.

Love’s 2019 book, We Want to Do More Than Survive, is arguably the single most comprehensive and up-to-date guide to the ideology of the CRT movement in education. Diving into Love’s highly readable and stunningly radical book clarifies, and in some cases virtually decides, a number of live controversies: Is CRT just an obscure and irrelevant legal theory, or is it actively shaping educators and schools? Is CRT Marxist? How should we understand the Left’s new interest in civics and so-called media literacy? What is CRT’s attack on “Whiteness” all about? [More]

What it's about is applying abolitionist thinking to America itself: Abolishing not slavery, already abolished, but America itself. Kurtz goes on to say

Along with the Constitution, Love clearly hopes to overturn the “Eurocentric, elitist, patriarchal and dehumanizing structures of racial capitalism and its liberal underpinnings.” The unmistakable implication of this, and much else in Love’s book, is that her ultimate goal is the abolition of America itself. That is, Love wants to replace our constitutional system, and the classical liberalism that helps ground it, with a society built on radically different “goals and ideals.”

Er, not quite. What Ms. Love wants to Replace is white people, "whiteness", white majority rule, all that stuff. She wants to abolish America because it's white.

Progressives, even, dare I say it, the Critical Race Theorists, have a more accurate understanding of who created America, what it was created for, and what its future was intended to be than Conservatism Inc. publicists would ever dare admit. The Founders clearly thought the United States would be a majority white state in perpetuity.

Ms. Love thinks of America as basically white country, just as Peter Brimelow, Sam Francis, Jared Taylor and most Americans throughout history have. (See below.) She just hates it and wants to Abolish it.

Here's what National Review used to think, when Peter Brimelow still worked there in the 1990s:

However, although intellectuals may have decided that America is not a nation but an idea, the news has not reached the American people-especially that significant minority who sternly tell the Census Bureau their ethnicity is "American." (They seem mostly to be of British origin, many generations back.) And it would have been considered absurd throughout most of American history.

John Jay in The Federalist Papers wrote that Americans were "one united people, a people descended from the same ancestors, speaking the same language, professing the same religion, attached to the same principles of government, very similar in their manners and customs." Some hundred years later, Theodore Roosevelt in his Winning of the West traced the "perfectly continuous history" of the Anglo-Saxons from King Alfred to George Washington. He presented the settling of the lands beyond the Alleghenies as "the crowning and greatest achievement" of "the spread of the English-speaking peoples," which—though personally a liberal on racial matters—he saw in explicit terms: "it is of incalculable importance that America, Australia, and Siberia should pass out of the hands of their red, black, and yellow aboriginal owners, and become the heritage of the dominant world races."

We're all for a constitutional system, and classical liberalism,  but they won't work in a white minority America ruled over by people like Ms. Love.