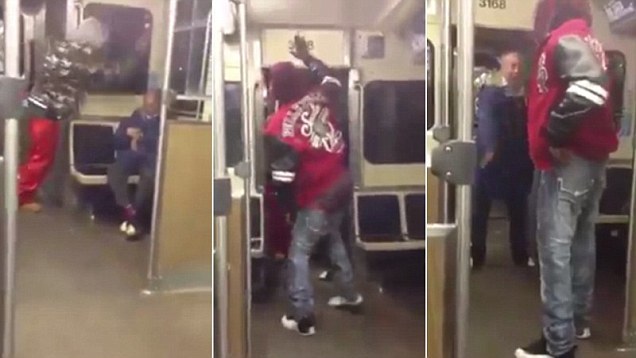 Notes From The Underground: Big City Subways Can Be Scary Territory For Whites

The recent black-on-white train attack in Chicago depicted above—where two black males repeatedly slap and terrify an older white man while a third  takes video—is the type of thing that happens far more often than we see reflected in the media. Back when I lived in New York City in the late 90s and early oughts, I witnessed at least a dozen incidents in which rampaging young blacks terrified the occupants of an F, C, G or D train.

It was always blacks. I never once witnessed a marauding gang of Orthodox Jewish teenagers. I noticed that a favorite target was Asians.

One of the scarier ones happened on my way to work in the Bronx. I would ride the F train through Manhattan, which had me sharing space with attractive, well-dressed white people, and switched over to the D train for the remainder of the trip, which had me riding with very few people at all, but the ones there were typically black or Hispanic. Once, I was on the train with only two or three other people, one of whom was a middle-aged black male.

He seemed normally dressed, but started to slap the windows and seats in a hard, rhythmic fashion—almost like some kind of African war drum. It got louder and scarier, and then he started to chant incomprehensibly. What I could make out, though, was "I'm gonna kill me a m*thaf*ckin' white man". I looked around, and to my horror, noticed I was the only white man on the train.

I felt a fear like I had never felt before in my life. There were no police on the train. There were no cameras. Cell phones did not work from the train. Of course, I had no weaponry on me. I am 6 feet tall and was in decent shape, but against a crazy and possibly armed black male seething with racial hatred, I had good reason to be afraid. Like the older white man in Chicago, I was trapped prey.

Nothing happened to me. I got off at the next stop, though it wasn't my stop, and waited for the next train.

In retrospect, maybe I should have called the police. If for no other reason than to simply file a report. The man in Chicago should do the same, if he has not already. Whites are conditioned not to think of themselves as victims of hate crimes, but this desperately needs to change. Because we are, and I expect it to worsen.