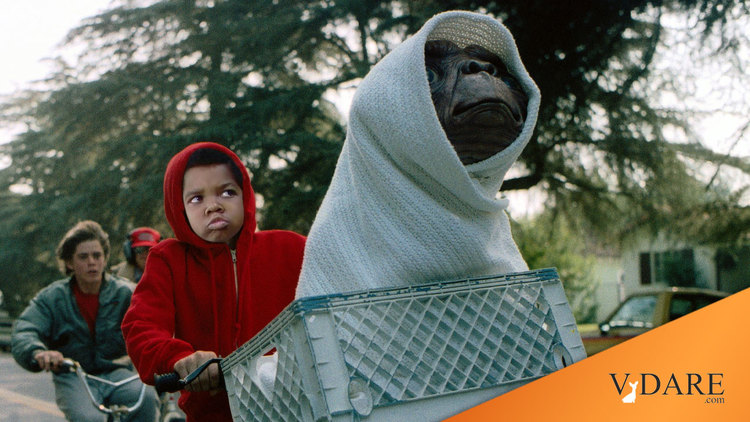 NEW YORKER And Steve Sailer: Plots Of 1980s Movies If Their Protagonists Had Been People Of Color

Humor from the New Yorker (with some interpolations by me — see if you can guess which):

“Risky Business” — After a suspicious neighbor calls the police on Joel Goodson, and his sex party gets raided, he is tried as an adult on felony charges for destruction of property, solicitation, and twenty-two counts of corrupting a minor. He does not get into Princeton.

“E.T. the Extra-Terrestrial” — As Cambodian refugees themselves, Elliott and his family are able to walk E.T. through the asylum process. After getting a green card, E.T. settles in California and opens a successful chain of laundromats called “Foam Home.”

“Chariots of Fire” — After running 400 meters on the beach, the aspiring Olympic 100-meter men knock off to individually practice their intimidating glares and menacing body language that they will use on each other at the starting line of the big race. Eventually, their coach cajoles them into practicing the 4 x 100m relay as a team a few times. After several dropped batons, a fight breaks out and practice is over.

“Ferris Bueller’s Day Off” — In the words of Ferris Bueller’s—or, rather, Ferris Bulele’s—parents, they “weren’t born yesterday,” and “did not come all the way from Senegal so that their son could skip class and wind up addicted to drugs.” Ferris attends school that day, and every other day, until he graduates high school as valedictorian, goes to Yale, and becomes a dermatologist. His parents are still disappointed that he didn’t become a cardiologist.

“Das Boot” — The enlistees pass up the opportunity to volunteer for hazardous submarine combat duty in favor of sensible land-based postings in supply that will later help them get post-service paper-pushing jobs with the City and, by age 58, retirement on two government pensions.

“The Breakfast Club” — The five​ ​Shermer High School students attend all-day detention together for what will be the first of twelve all-day detentions they receive that year—a rate of disciplinary action far exceeding that of their white peers. Thirty-five years later, the “Shermer Five,” as they come to be known, are discussed at length in an episode of the podcast ​“Nice White Parents.”

“The Right Stuff” — Nobody ever gets any higher off the ground than he can jump.

“Sixteen Candles” — Rather than ridicule him, Sam and her friends bond with Long Duk Dong over their shared experience as immigrants. At the end of the film, Long throws Sam a surprise quinceañera and wows the guests with his shockingly suave Latin dance moves.

“Amadeus” — Tiger Father Leopold Maozart forces Wolfie to practice the classics for 14 hours per day and never lets him compose anything new.

“The Karate Kid” — Daniel, a Black kid raised in Newark in the eighties, does not need to learn karate in order to kick the asses of every single member of the Cobra Kai dojo, including the sensei.

“Raiders of the Lost Ark” — Indiana Jones steals artifacts from American museums and returns them to their rightful countries of origin.

“Caddyshack” — People of color would not have agreed to make this film​.

“Koyaanisqatsi” — People of color would not have agreed to make this film​.

“Witness” — Nobody saw nothing.