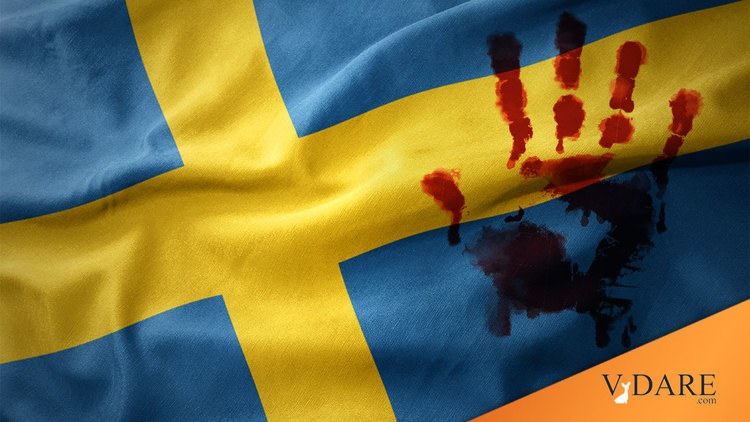 Earlier: Shootings In Sweden Up 1268% Since Merkel’s Mistake

From the New York Times news section, a pretty funny article about how efforts to turn utopian Sweden into Detroit in 1967 are finally paying off:

The far right has made strides by tying the longstanding issue to immigration, while Sweden’s center-left party is blaming it on failed integration to fight an exceptionally tight race.

STOCKHOLM — … The killing of young Adriana, an innocent bystander, became a prominent part of a steadily swelling epidemic of gun violence in Sweden, which now has some of the highest rates of gun homicides in Europe.

… The gun issue, amid an energy crisis and soaring inflation, has helped spawn an exceptionally tight race — one entwined with deeper questions about Swedish identity, a diversifying country and a failure to integrate immigrants, especially those who arrived in Sweden during Europe’s migration crisis in 2015.

Other European countries like Germany with similar levels of immigration have not experienced the same rise in gun violence, and with many cases unsolved, researchers say more study is needed to understand the epidemic.

All those unsolved cases must be the fault of native Swede billionaire Christian Nazis. Were we lied to by The Girl with Dragon Tattoo?

I don’t think so!

But the debate has offered fodder for conservative parties in an already tense campaign, especially the far-right Sweden Democrats, a contender for Sweden’s leading opposition party who are using the violence to further a longstanding anti-immigrant agenda.

The center-left Social Democrats — already governing without a majority in Parliament — find themselves in perhaps their most precarious position after a century of dominating Swedish politics.

The government argues that more resources and employment opportunities must also be put toward integrating the segregated, immigrant-heavy suburbs that ring major cities where the gun violence has been concentrated.

But fearful of losing more voters, it has capitulated to public concerns by adopting tougher policies on crime, even as the far right and other conservatives are calling for even harsher steps.

“Too much migration and too weak integration has led to parallel societies where criminal gangs have been able to grow and gain a foothold,” Prime Minister Magdalena Andersson said last month, as she introduced measures expanding police powers and lengthening punishments for serious weapons offenses.

As we all know, the point of gun control laws is not to punish, incapacitate, and deter gun criminals, it’s to punish lawful gun owners for being icky.

Such calls in the middle of the election campaign have left the victims of crimes frustrated that they are being used as political pawns and the residents of Sweden’s poorer neighborhoods feeling marginalized by a nation that promised them equal treatment.

“Crime is, to a certain degree, also a question of how we see immigrants and how we see the multicultural society,” said Magnus Blomgren, a professor of political science at Umea University, in northern Sweden, adding that the issue had now taken on outsize importance in a country of shifting demographics.

“We have a picture of what we are,” he said. “But that is changing.”

And for now, uncomfortably so.

A fifth of Sweden’s 10 million residents were born abroad — split between European migrants and an increasing number of migrants from countries like Syria, Somalia, Iraq and Afghanistan in the past decade.

But in cities like Stockholm, Malmo and Gothenburg — where a higher proportion of migrants have settled compared to the rest of the nation — the media and residents alike point to two separate worlds: a polished city center emblematic of the nation’s wealth, and poorer, ethnically diverse outer suburbs where police officers carry tourniquets to stem gunshot wounds.

“Linking it to migration is in the interests of those that are interested in creating a very simplified reality and creating polarization,” said Amir Rostami, a sociologist at the University of Gavle. “We are only seeing this very narrowly.”

In a country with strict gun laws, where licenses are usually limited to hunting rifles, criminologists have linked the shootings to the illegal drug trade and say they have been fueled by a stockpile of thousands of firearms smuggled in from postwar Balkan countries, Eastern Europe and Turkey.

Still, as the nation closes in on an election, lawmakers have zeroed in on promises of law and order, citing gang warfare and riots in some Swedish towns.

That focus has left some migrants in neighborhoods outside of cities like Stockholm mistrustful of the authorities and feeling like second-class citizens even after decades in the country.

“We came with hopes and aspirations,” said Axel Shako, an activist from London involved at the Fryshuset youth center in north Stockholm.

“The question should be for the politicians. We are just doing our best.”

… Underage offenders in Sweden are already facing less leniency if they commit serious crimes, as the government said last month that it would increase the sentence for serious weapons crimes.

But social workers and youth organizations have called harsher punishments a Band-Aid solution that ignores the larger problem of the inequality dividing Sweden, including better resources for school programs, work opportunities and mental health.

Look, gun violence shouldn’t be punished, it should be rewarded.