The New York Times analyzed the California experience with illegal immigration on Sunday, with the usual slant that diversity happens and American citizens should just lay back and enjoy the tacos.

Apparently, the paper believes that Obama’s unilateral action was Not Enough Amnesty because all 11-20 million weren’t covered, hinted in a prominent photo: 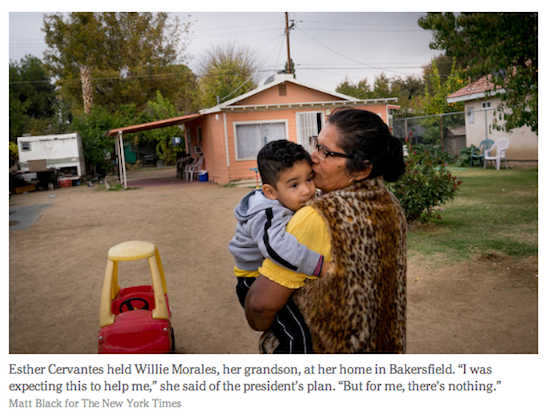 As is often the case with mainstream media, comments can be more accurate than the official text:

I am a native Californian and a liberal. I am appalled at what illegal immigration has done to my beloved state. Huge areas of former middle class housing turned into crime-ridden slums. Our cities and freeways so crowded that travel is unbearable. My brother and my closest friends are contractors who follow the law and pay all the required taxes – only the very wealthiest residents can afford to hire them because the great majority of contractors employ illegals at slave wages and dodge all taxes. An employer who hires legal residents and pays all taxes cannot compete.

Just as Reagan’s ill-advised amnesty opened the floodgates that caused the current situation, Obama’s contempt for middle and lower class America will produce untold millions more illegals. We need to ask ourselves – do we want a US modeled on crime-ridden Mexico? Or perhaps Honduras? El Salvador? Perhaps Guatemala? These are all failed countries, ruled by corrupt governments and gang violence which they are exporting to us in the form of illegals. Is this the future we will leave to our grandchildren?

California is an example that immigration demographic change can transform politics completely. The state was a conservative bastion a few decades back until immigration happened, along with a liberal transformation of the schools and an Alinsky-esque media.

Meanwhile, California has fallen enormously in quality of life issues, such as terrible traffic and SRO public transportation as a result of immigration-fueled overpopulation. At one time, families would move here so their kids could attend the state’s excellent public schools and universities. Now they are diversity propaganda factories.

Unemployment has been a bad problem in California, where jobs have come back much more slowly than nationally following the recession. It doesn’t help that the state is hugely over-regulated, and now there’s a million additional workers added to the legal job pool. That’s really tough for workers who are struggling already.

LOS ANGELES — There may be no better place than California to measure the contradictions, crosswinds and confusion that come with trying to change immigration law.

For 30 years, California has been the epicenter of the churn of immigration — legal and not — in the nation. It was California where Pete Wilson, the Republican governor, championed in 1994 a voter initiative known as Proposition 187, which severely restricted services to immigrants here illegally. And it was California where just last year, Gov. Jerry Brown, a Democrat, held a celebratory, dignitary-filled signing of legislation permitting unauthorized workers to obtain driver’s licenses.

One-third of the immigrants in the country illegally live in California, which has a 125-mile border with Mexico, much of it guarded by long stretches of border fence. They work on farms in the Central Valley, in manufacturing jobs in Los Angeles, and as housekeepers and gardeners in Silicon Valley, alongside a steady stream of young legal immigrants who hold low-paying, high-skilled jobs in Northern California’s critical tech industry.

They come mostly from Mexico but also from Central America, the Philippines, South Korea and Japan. Commercial boulevards in the heart of Los Angeles are a riot of Korean-language signs, and in many neighborhoods in San Francisco the talk on the street is as likely to be in Spanish or Chinese as it is English.

And while many undocumented immigrants take pains not to draw attention to their status, California nonetheless offers the prospect of a more open existence than much of the country does, albeit in an ask-no-questions fashion. Given the way many of these immigrants are already treated by the state, be it with the issuing of driver’s licenses or some health insurance, President Obama’s executive action on immigration was almost anticlimactic to many people here.

“We are the state that has the most settled immigrant population in terms of people who have been in the country for 10 years,” said Manuel Pastor, a co-director of the Center for the Study of Immigrant Integration at the University of Southern California. “We went through our Prop. 187 moment. We are at the other end. People will be eager to make this happen, because they realize we are going to get comprehensive immigration reform at some point.”

Indeed, more than half the undocumented immigrants in California have lived here at least 10 years — far more than anyplace else in the country — and one-sixth of the children in California have at least one parent here illegally, according to Mr. Pastor’s center. That was illuminated by Mr. Obama’s expansion of the deportation protection program, since it was based largely on how long immigrants have resided here and whether they have American-born children.

“My parents are going to be able to qualify under this program,” said Paola Fernandez, 28, a representative of the Service Employees International Union who lives in Bakersfield. She was brought here as a child and got permission to stay under Mr. Obama’s Deferred Action for Childhood Arrivals program. She has two younger siblings who were born here, which bodes well for her parents.

“We’ve been here close to 25 years,” Ms. Fernandez said. “On a very personal level, this is a very amazing moment.”

At the same time, the extent of the illegal immigrant population here spotlighted limitations in what the president had to offer last week. Most notably, farmworkers in the Central Valley found themselves divided between those whose children were born in the United States or who are permanent legal residents — and thus eligible for the blanket of Mr. Obama’s action — and those who had children in their home country or not at all.

“I’m scared that my family will be torn apart,” said Maria Ramos, 21, who moved here from Zacatecas, Mexico, in 1994 and was granted a deferral in 2012 while her parents remained here illegally. “It’s scary to think my mom could get deported. They’re going to tear our family apart. I wouldn’t want that for other people to experience.”

There are few states where immigrants are as integral to the economy, whether in farming, manufacturing or basic services. And many analysts suggested that those different forces were reflected in the White House’s attempt to parse the differing demands of, in particular, Silicon Valley, with its thirst for high-end technology workers, and the Central Valley, with its overwhelming demand for inexpensive labor to work on the farms.

In Silicon Valley, Mr. Obama offered a limited promise to open the doors to high-skilled legal immigrants brought here by technology companies, while making it slightly easier for those already here and eager to switch jobs without putting their immigration status in jeopardy.

Sujoy Gupta, an Indian immigrant who came to the United States in 2003 to study and now works at a start-up called AppDirect in San Francisco, said the current visa rules made it difficult for him and his wife, Pooja Madaan, who works in marketing, to change employers, travel or buy a home.

“So every time I change my job, I have to reapply for my visa,” he said in an interview in his San Francisco home on Friday. That is likely to change now.

These changes were less than what Silicon Valley business leaders wanted but stood in contrast with agriculture, where the White House resisted requests to create a waiver for farmworkers. Half the agriculture workers in the Central Valley have immigrated here illegally.

“A major part of the work force that harvests the crops is undocumented, and it’s time we just recognized that,” said Greg Wegis, the president of the Kern County Farm Bureau.

Esther Cervantes, 53, who came here illegally nearly 20 years ago and packs the grapes her husband picks, paid to have her children brought over in 2000; they all received deportation deferrals under Mr. Obama’s earlier act and are thus assured a future here.

“I was expecting this to help me,” she said. “But for me, there’s nothing. I don’t have children who are citizens or residents.”

There has been a thriving underground economy across the state involving undocumented immigrants: the child care workers for wealthy software developers in Silicon Valley, where 8 percent of the work force is unauthorized, or the gardeners for estates in Beverly Hills. Presumably, that will come more into the open and, with it, promises for more job stability, an increased ability to change jobs and less fear of harassment by employers taking advantage of their vulnerability, said Reshma Shamasunder, the executive director of the California Immigrant Policy Center.

“It’s going to be an important contribution to the California economy both in terms of raising revenues, but also the security of the work force,” she said.

While other states may resist Mr. Obama’s initiative, California officials are already looking to expand existing programs to help immigrants here illegally. At La Raza Community Resource Center in San Francisco’s Mission District, which instructs immigrants on what kinds of documents they may need to apply for legal status, officials are preparing to help people take advantage of the new policy.

“Once people know more about it, there will be a lot of interest,” said Carl Larsen Santos, the center’s immigration program coordinator. “The psychological impact of having a work permit and not living in fear will be a huge boon to the community.”

California has had some notable pockets of resistance to immigrants, most recently over the summer when protesters carrying signs and American flags met three buses of immigrant mothers and children in the city of Murrieta. But over all, this is a state that has embraced measures intended to make it easier for immigrants to live and work within its borders. A survey by the Pew Research Center last week found that of the 11.2 million illegal immigrants in the United States, 2.5 million live in California.

“California is more politically and emotionally evolved on this topic than the rest of the country,” said Bill Whalen, a fellow at the Hoover Institution at Stanford University and a former long-term aide to Mr. Wilson. “We have been through this for 20 years now. It’s the California existence: You are familiar with illegal immigration, you probably tapped into it in some way — hiring someone illegally to look after your children or tend your lawn.”

Matt A. Barreto, a professor of political science at the University of Washington in Seattle, said that even before the president’s action, California held itself forth as a model on immigration. “Across a variety of issues and policies, California has been a laboratory for the nation, forecasting and foreshadowing what might happen nationally,” he said.