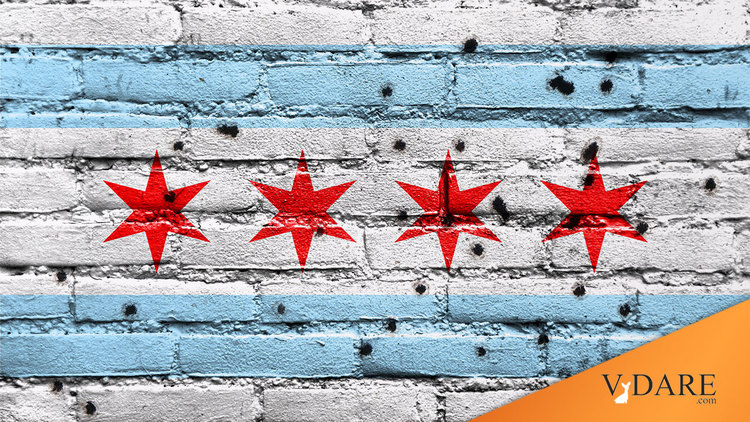 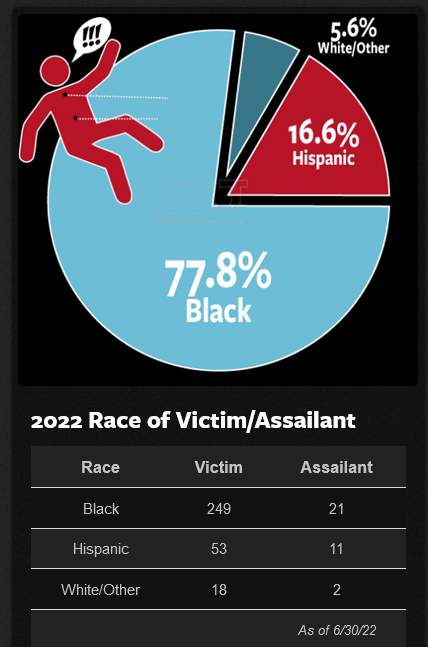 The last year we have clear data on the race of suspects in Chicago shootings comes back in 2011, when the Chicago Police Department confirmed 95 percent of homicide suspects are black or brown. Whites were only four percent. See my article Blake Masters IS RIGHT! “Black People, Frankly” DO Commit Almost All Gun Crime In U.S., June 23, 2022].

HeyJackAss.com, which has been hilariously documenting shootings in Chicago for years, confirms this number is basically the same for 2020, with blacks responsible for 77.8 percent of shootings and Hispanics 16.6 percent.

CHICAGO -- At least seven people were killed and 18 others have been wounded in shootings across Chicago so far this weekend.

Sunday morning, a 44-year-old man was found fatally shot in Roseland on the South Side. The man was found about 7:30 a.m. in the 10400-block of South Corliss Avenue with multiple gunshot wounds and was pronounced dead at the scene, Chicago police said.

Hours earlier, two men died during a shootout in Lawndale on the West Side. They were in a car going south in the 800-block of South Albany Avenue about 2:40 a.m. when a red SUV approached and someone inside opened fire, leading to a shootout between both cars, police said. A 28-year-old man was shot in the head and a 25-year-old man suffered gunshot wounds to the upper back, police said. Both were taken to Stroger Hospital, where they were pronounced dead.

Less than 12 hours earlier, a man was fatally shot less than a mile away. The man, 56, was on the sidewalk in the 600-block of South California Avenue about 5:15 p.m. Saturday when a car approached and someone inside opened fire, striking him in the head, police said. He was taken to Mount Sinai Hospital, where he was pronounced dead, police said.

A woman was killed and a man wounded during a fight on a porch Saturday night in East Garfield Park on the West Side. The two were sitting with others on a porch about 11:35 p.m. in the 3900-block of West Wilcox Street when the fight began and someone opened fire, police said. The woman, believed to be in her mid 20s, was shot in the head and taken to Mount Sinai, where she died, police said. The man, 27, was grazed in the mouth and taken to the same hospital, officials said. He was listed in good condition.

About 20 minutes later, a man was found fatally shot in an alley in Grand Crossing on the Far South Side. The man, 31, was found with six gunshot wounds - one to the head and five to the back - about 11:55 p.m. in the 1300-block of East 76th Street, police said. He was taken to the University of Chicago Medical Center, where he was pronounced dead, police said. The man is the twelfth person killed in the Greater Grand Crossing community area so far this year, according to Chicago Sun-Times data. The area recorded 15 murders in the same period last year.

Friday night, a 25-year-old man was fatally shot in Englewood. Corey Williams was involved in a “narcotics-related transaction“ in the 7000-block of South Eggleston Avenue about 7:10 p.m. when another person pulled out a handgun and shot him in the stomach and thigh, police and the Cook County medical examiner‘s office said. He was transported to the University of Chicago, where he was pronounced dead.

Less than an hour later, a 14-year-old boy was grazed by a bullet in the Woodlawn neighborhood on the South Side. The boy was walking down the street in the 6500-block of South Ingleside Avenue about 7:50 p.m. when a person walked toward him and shot him in the abdomen, police said. The teen was transported to Comer‘s Children‘s Hospital in good condition, police said.

A second teen was wounded in a shooting Saturday night in Humboldt Park on the Northwest Side. About 7:50 p.m., the 17-year-old was in the 1300-block of North Homan Avenue when he was shot in the groin, police said. He was taken to Norwegian Hospital where he was listed in good condition, police said.

A 17-year-old girl was shot Sunday evening while sitting in a car in Englewood. The girl was a passenger in the car in the 7300-block of South Union Avenue when she was hit by gunfire, police said. She was taken to University of Chicago in good condition.

Three people were killed and at least 36 others, including an off duty Chicago police officer, were wounded by gunfire across Chicago last weekend.

The question we are not supposed to ask: had the Great Replacement not occurred in Chicago (Chicago was 92 percent white in 1940, just before our entry into World War II), would we have any need to be tallying up fatal/nonfatal shootings in the Second City as sport?