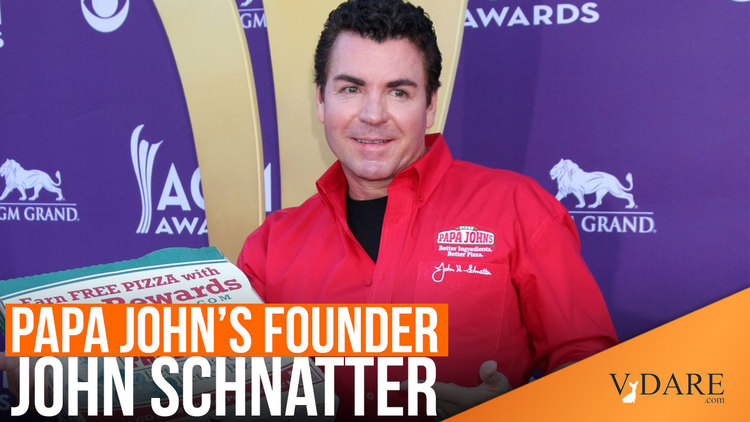 From the New York Times‘s news section in 2018:

John Schnatter, the founder of Papa John’s Pizza, has resigned as chairman of the board of Papa John’s International, the company announced late Wednesday, hours after he apologized for using a racial slur in a comment about black people during a conference call in May.

The company, one of the largest pizza chains in the United States, with more than 5,000 locations around the world, said that its independent directors had accepted Mr. Schnatter’s resignation and would appoint a new chairman in the coming weeks. Mr. Schnatter will remain on Papa John’s board, according to a regulatory filing.

Earlier Wednesday, Mr. Schnatter described his comments during the conference call as “inappropriate and hurtful” in a statement provided by the company.

The apology was prompted by a report in Forbes that described the call, which was with the Laundry Service marketing agency. Mr. Schnatter said that Col. Harland Sanders, who founded the Kentucky Fried Chicken fast-food chain and was its longtime spokesman, used the racial slur to describe black people and never faced backlash for doing so, according to the Forbes report.

He also discussed his youth in Indiana and the violence against black people that took place there, according to the report.

“Regardless of the context, I apologize,” he said in his statement confirming the report. “Simply stated, racism has no place in our society.”

Mr. Schnatter, 56, also resigned from the board of trustees for the University of Louisville, according to the school....

And the reaction spread to Mr. Schnatter’s hometown Jeffersonville, Ind., where the mayor stripped a local gym of his name. “I made the decision yesterday at 4 p.m., sign was removed at 4:30,” said Mike Moore, the mayor, in an email on Thursday. “John’s comments are not acceptable and I will not allow a building in the city of Jeffersonville to honor his name.”

Mr. Schnatter set off an uproar in November by blaming the National Football League — with which Papa John’s had a sponsorship deal — for a slump in sales during a conference call with investors. He complained about the league’s handling of football players who protested racism and police brutality by kneeling during the national anthem. …

The comments were praised by white supremacists, and Papa John’s responded by saying it did not want white supremacists or their groups buying its pizzas. Mr. Schnatter, an outsized figure at the company who appeared frequently in its commercials and owns 30 percent of its stock, stepped down as chief executive in December....

Forbes reported that the call in May was intended to help Mr. Schnatter avoid future public relations blunders involving race.

But from the Associated Press feed today, a press release from John Schnatter:

LOUISVILLE, Ky., March 3, 2021 /PRNewswire/ — The U.S. District Court for the Western District of Kentucky has ordered that an Amended Complaint filed by Papa John’s founder and former Chairman and CEO John Schnatter must be unsealed, revealing shocking details from the case for the first time. The unredacted excerpts demonstrate how Laundry Service, a firm hired by Papa John’s to enhance its brand and that of the company founder, instead conspired to directly and willfully harm their image and brand.

According to the Amended Complaint, the details come from a “hot mic” conversation between the Laundry Service CEO, Jason Stein, and other firm personnel after concluding a conference call with Schnatter, in which the Papa John’s founder repeatedly expressed his disdain for racism. Clearly planning to reverse the meaning of Schnatter’s comments and expose a false version of them to the media, Stein and his colleagues discuss ways they can destroy the founder’s reputation and thus his namesake company’s brand, as reflected in the complaint.

In the conversation that was taped by a witness in the litigation, Stein said that he hoped “he gets f******* sent out to pasture on this s***.” The plot was to use Schnatter’s statement “against him” and to schedule a “live interview with a hostile media personality and prompt Mr. Schnatter to make damaging statements which need ‘to be viral,’” according to the complaint.

“The chilling details from this taped conversation make clear the intent of Laundry Service to destroy my reputation, as well as the Papa John’s brand, harming our employees and franchisees in the process. A recent investigative report by former FBI Director Louis Freeh showed there was nothing racist in my words or actions on the conference call with our ad firm and also proves there has never been in my history. With this and the evidence coming forth in our litigation, it’s time for Laundry Service to be held accountable, and for Papa John’s to correct the record and apologize to me for validating the media frenzy that led to my forced departure as the company Chairman,” Schnatter concluded.

29. Laundry Service did not meet expectations. By spring of 2018, its management was afraid that it was going to lose the Papa John’s account, partially because Mr. Schnatter was unhappy with Laundry Service’s approach.

30. On May 14, 2018, Mr. Schnatter attended a meeting at the Laundry Service office in Brooklyn, New York, to discuss a new advertising campaign for the company. At the meeting, the then-CEO of Laundry Service (Jason Stein) strongly advocated for Papa John’s using Kanye West in its new campaign. Mr. Schnatter considered this option for a few days but then expressed discomfort with partnering with Mr. West because of his controversial nature and use of the “n-word” in his lyrics.

32. At the end of the call, Mr. Schnatter expressed how his comments regarding the NFL were improperly reported and used to paint him as someone he was not. He then said:

“[W]hat bothers me is Colonel Sanders called blacks n—–s. I’m like, I never used that word. And they get away with it. And we used the word ‘debacle’ and we get framed in the same genre.”

33. Mr. Schnatter thus did not use a racial slur against African Americans in the call. On the contrary, he clarified—in this impromptu discussion of race—that it was a term he had never used. And, moreover, that it was absurd to draw a moral equivalency between his describing NFL management’s handling of the anthem protests as a “debacle” and statements by a public figure openly disparaging minorities.

35. There was no mistaking Laundry’s Service’s ill-intent. As a former employee present during these discussions has testified: “this did not seem part of the efforts to maintain – to help John’s reputation to do the job that we were paid for to help … [this seemed like] the opposite of helping John.” When that employee reported the issue to Laundry Service’s human resources department and provided the incriminating recording, he was told to delete the recording.

37. On the evening of July 10, 2018, Mr. Schnatter received a call from the General Counsel of Papa John’s and was told “[someone] at Laundry Service has been talking to Forbes.”

38. The next morning, on July 11, 2018, Forbes published an article titled, “Papa John’s Founder Used N-Word on Conference Call.” The article characterized Mr. Schnatter’s statement as a way of “downplaying the significance of his NFL statement” without providing the context of his comments. The article also stated, incorrectly, that Wasserman had moved to terminate the Services Agreement with the company as a result of Mr. Schnatter’s statements during the call. In truth, Papa John’s had terminated Laundry Service as the company’s media buyer.

It’s almost as if the Woke sometimes have mercenary motivations …