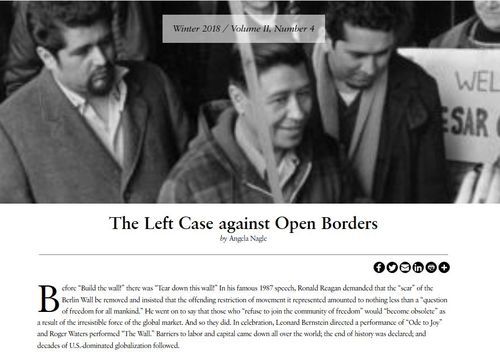 Nagle's "The Left Case Against Open Borders" Attacked By All The People Who Say "No One Wants Open Borders!"

The Left Case against Open Borders
by Angela Nagle

… If Trump is for immigration controls, then the Left will demand the opposite. And so today talk of “open borders” has entered mainstream liberal discourse, where once it was confined to radical free market think tanks and libertarian anarchist circles.

While no serious political party of the Left is offering concrete proposals for a truly borderless society, by embracing the moral arguments of the open-borders Left and the economic arguments of free market think tanks, the Left has painted itself into a corner. If “no human is illegal!,” as the protest chant goes, the Left is implicitly accepting the moral case for no borders or sovereign nations at all. But what implications will unlimited migration have for projects like universal public health care and education, or a federal jobs guarantee? And how will progressives convincingly explain these goals to the public?

During the 2016 Democratic primary campaign, when Vox editor Ezra Klein suggested open borders policies to Bernie Sanders, the senator famously showed his vintage when he replied, “Open borders? No. That’s a Koch brothers proposal.”1 This momentarily confused the official narrative, and Sanders was quickly accused of “sounding like Donald Trump.” Beneath the generational differences revealed in this exchange, however, is a larger issue. The destruction and abandonment of labor politics means that, at present, immigration issues can only play out within the framework of a culture war, fought entirely on moral grounds. In the heightened emotions of America’s public debate on migration, a simple moral and political dichotomy prevails. It is “right-wing” to be “against immigration” and “left-wing” to be “for immigration.” But the economics of migration tell a different story.

This article has generated a lot of angry responses from Nagle’s former allies on the left about how Nobody is for Open Borders, so why is Nagle even mentioning this?

We’re just against everybody who is against Open Borders, you hateful racist xenophobic nativists.