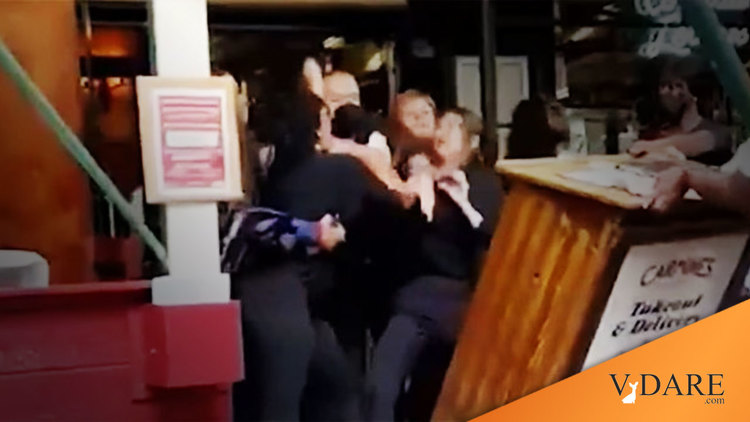 Mutual Combat At The Family-Style Restaurant

Earlier: Three Black Women From Texas Get Violent Over Vaccine Passports And "As A Texan" Trends On Twitter and BLM To Protest Racist Karen Restaurant Hostess

The Carmine’s Italian family-style restaurant saga remains an amusing portrait of 2021 prejudices about vaccines, Texans, black jubilation, Koreans, and so forth and so on. From the New York Times news section:

Amid Conflicting Accounts, Tourists Plead Not Guilty in Carmine’s Fight

Three Texas tourists were arraigned on assault and harassment charges, weeks after an altercation at an Upper West Side restaurant drew widespread attention.

… A lawyer for one of the women told The New York Times that the hostess, who is Korean American, used a racial slur toward the guests, who are Black, and described the exchange as “mutual combat.”

… Jeffrey Bank, the owner of Carmine’s, referred questions to a spokesman on Wednesday, but he said earlier that the video “clearly” showed the women from Texas provoked the attack.

“While the video shows the women talking to our managers and other employees, at no point did the women mention that any of the hosts ever made a racial slur,” he said. “This is because none of our hosts — all of whom are people of color — ever uttered such a slur.”

After all, no person of color would act so white as to utter an ethnic slur.

The hostess, who is 24 and has not been named publicly, said in a statement that being accused of using a racial slur was “even worse than being physically assaulted.”

“The accusation stating that I said a racial slur is unbelievable,” the hostess said in a statement through her lawyer, Aaron Mysliwiec. “I am a Korean immigrant, I was born in Seoul, Korea,” she said, adding that she had “the utmost respect” for all people of color. “I would never call anyone a racial slur,” she said.

Koreans are of course so much more moral than whites when it comes racial sensitivities.