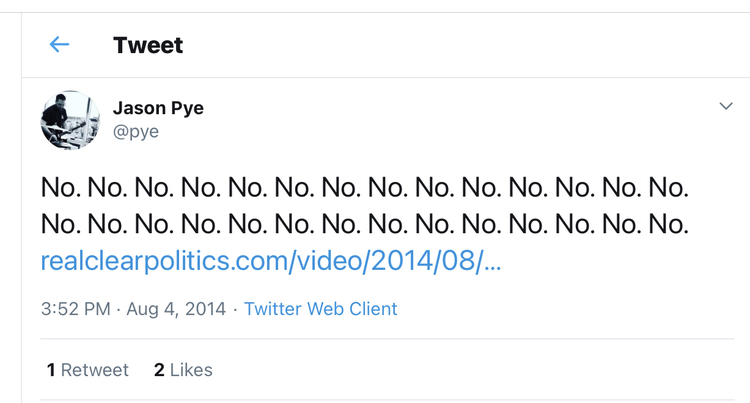 Mo Brooks: Democrats Waging A "War On Whites"—Righteous Right "No. No. No"

Representative Mo Brooks, speaking on the Laura Ingraham Show, said that the Democratic Party is waging a "war on whites." I know that, because this guy thinks he shouldn't have said it, and it was retweeted by Instapundit (Professor Glenn Reynolds) who while he says many sensible things politics, is a little self-righteous on race. (He was one of the people piling on Trent Lott over remarks at Strom Thurmond's 100th birthday. )

REP. MO BROOKS (R-AL): This is a part of the war on whites that’s being launched by the Democratic Party. And the way in which they’re launching this war is by claiming that whites hate everybody else. It's part of the strategy that Barack Obama implemented in 2008, continued in 2012, where he divides us all on race, on sex, greed, envy, class warfare, all those kinds of things. Well that’s not true, okay?

And if you look at the polling data, every demographic group agrees with the rule of law, enforcing and securing our borders, and every one them understands that illegal immigration hurts every single demographic group. It doesn't make any difference if you are a white American, a black American, a Hispanic American, an Asian American, or if you're a woman or a man.

Every single demographic group is hurt by falling wages and lost jobs. So the Democrats, they have to demagogue on this and try and turn it into a racial issue, which is an emotional issue, rather than a thoughtful issue. If it becomes a thoughtful issue, then we win and we win big. And they lose and they lose big. And they understand that. As they get more desperate they're going to argue race and things like that to a more heightened emotional state. (The Laura Ingraham Show, August 4, 2014)

Supposing Jeff Sessions doesn't want to run for President, Mo Brooks could run instead. (With Laura Ingraham for VP!)

War On Whites
<< Previous
Next >>
LATEST