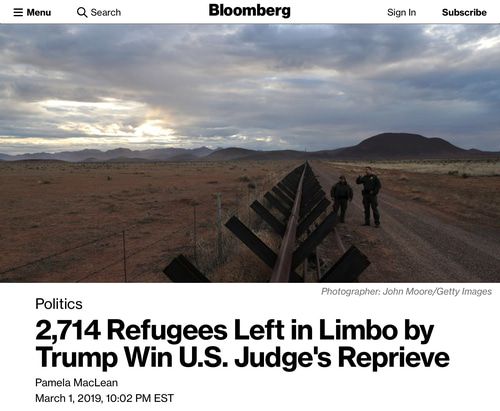 The program was just a method to avoid legal limits on immigration, especially country quotas on the children of legal permanent residents and others, and to avoid the legal definition of a refugee. Generally, no one may apply for refugee status in the United States without a referral from the United Nations High Commissioner For Refugees (UNHCR). There is no legal requirement for that, but it was just policy. There was no reason to make this exception for this particular group of aliens, since the program mostly was for the children of legal permanent residents who for some reason did not include their children on their applications for legal permanent residency, something that was very rare. In the end, the program ended up serving aliens claiming to be in the United States legally, either on Temporary Protected Status (TPS), or in the United States on NIVs, but really living illegally by violating the terms and conditions of their NIV.

Enter Laurel Beeler, a former Assistant United States Attorney, who was appointed by the crazed judges who run the 9th Circuit Court. She decided that she would impose her personal immigration policy on the President, who is in charge (Constitutionally) of adjudicating refugee and parole applications.

The Trump administration must come up with a plan for 2,714 Central American children and family members who were left in limbo — some facing life-threatening danger — when the government in 2017 abruptly ended a program designed to offer them safe passage to reunite with their relatives already living in the U.S.

A federal judge concluded Friday the government provided no reason — other than arguing it would be a burden on the Department of Homeland Security — why it shouldn’t process applications for children from Honduras, Guatemala and El Salvador who’d already been conditionally cleared to travel to the U.S. before the administration mass-rescinded the approvals in August 2017.

U.S. Magistrate Judge Laurel Beeler in San Francisco said the government doesn’t need to reinstate the Central American Minors program going forward — as requested by the child advocacy group that sued the administration. But she found plenty of evidence that the children who’ve been separated from parents for at least 18 months face horrific dangers in their home countries, from beatings to rape to murder.

Kritarchy is a menace to society. Time to stamp it out. President Trump should ignore Beeler’s order and just end the CAM program, then arrest their illegal alien sponsors. No judge, much less a Magistrate Judge, can order the admission of an alien, nor may that kritarch substitute their judgement on an issue of admitting aliens who have no lawful claim to admission. This is a good time for President Trump to go Andy Jackson on the kritarchy.