Five MS-13 Members Found Guilty In Double Murder. When Do We Summarily Deport The Rest? Never

A jury in Alexandria, Virginia, found five members of the Satanic MS-13 gang guilty last week in the double murder of two boys, both of whom the vicious murderers erroneously suspected of being someone they weren’t. The brutality reminds one of something Thomas Harris might imagine for a Hannibal Lecter story. 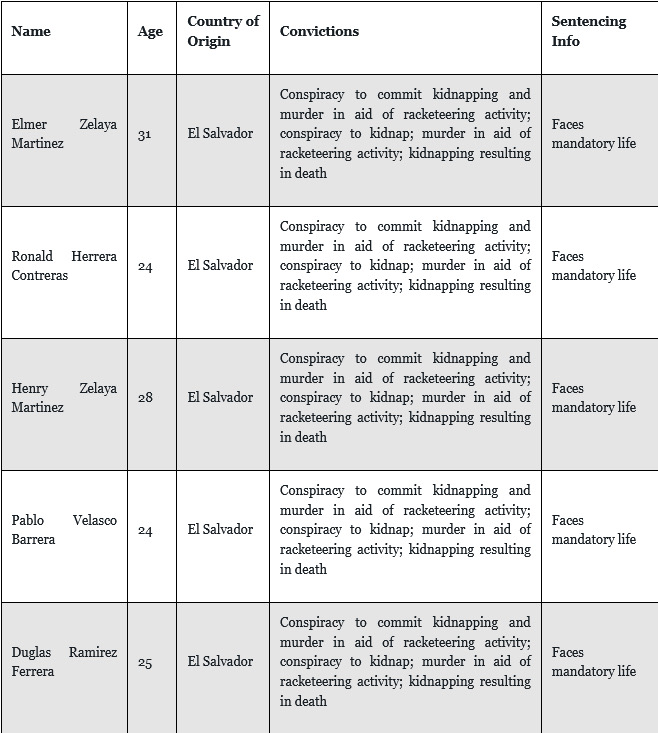 On separate occasions, lured 17 and 14-year-old boys to woods for gang meetings, then brutally stabbed and chopped victims with knives, machete, pickaxe before burying in shallow graves.https://t.co/Po7S0IT9L0

“On the night of August 28, 2016, the gang lured E.E.E.M. to Holmes Run Stream Valley Park in Fairfax County under the pretense that there was going to be a gang meeting there,” the Department of Justice release explains:

Instead, in a wooded area of the park, gang members restrained, attacked, and killed E.E.E.M., stabbing and chopping him more than 100 times with knives, a machete, and a pickaxe. Afterwards, the gang broke one of E.E.E.M.’s legs so that his body would fit into the pre-dug hole that was nearby.

The same gang members also murdered a 14-year-old who lived in Alexandria. They lured him to his death by inviting him to a gang meeting.

“Several gang members picked up S.A.A.T. and drove him to the same park where they had killed E.E.E.M,” the DOJ release continues:

The gang members restrained, attacked, and killed S.A.A.T., stabbing and chopping him with knives, machetes, and a pickaxe. They also filmed the murder with a cell phone so that they could prove to gang leaders in the United States and in El Salvador that they deserved to be promoted in rank. Once S.A.A.T. was dead, the gang broke his legs and tied him up with his own pajama pants so that he would fit into the shallow grave that was dug for him that night.

Prosecutors have charged 17 defendants; nine pleaded guilty. They face life in prison. The release doesn’t reveal what happened to the other three.

If the manner in which the two were murdered sounds Satanic, that’s because MS-13 is a Satanic gang:

[A]lthough the connection has waned over the past 30 years, it can still be seen in MS-13’s use of satanic nicknames, tattoos and other imagery. The gang’s devil horns hand sign is known as “la garra,” a Spanish reference to Satan’s claws. And some MS-13 members have told investigators that they committed their crimes at the behest of “la bestia,” or the Beast.

My second offering here in 2010 recounted the gang members’ murder of a woman about 30 miles from my home.

Nothing has changed since then, which raises the question of what to do about these feral murderers, whom Border Patrol agents routinely arrest at the border. Well, what should be done—relentless, merciless raids on these gangs and summary deportation for those left alive—won’t be done, at least not by Traitor Joe Biden.

My theory: Biden and his Homeland Security Chief are using MS-13 and other foreign gangs as street enforcers to terrorize the Historic American Nation into accepting its replacement.