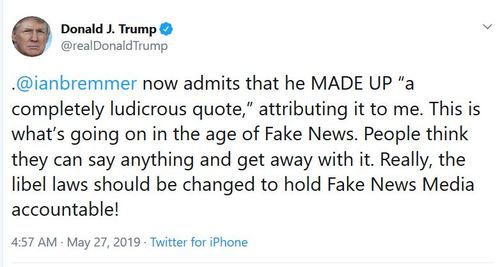 Fake News: How Many Historic Quotes Attributed To MSM Targets Were Just Made Up?

Donald Trump objects to a direct lie that was told about him by poltical scientist Ian Bremner. (Bremner says he meant it as  satire, but since he tweeted it in quotes, the MSM treated it as true. See Ian Bremmer Pushes Fake News On Twitter. Will Liberals Care? at The Federalist.)

UPDATE: @ianbremmer has now admitted that he fabricated this viral Trump quote. And yet it is being shared by journalists and congressmen as if it is real. pic.twitter.com/QgNd9DnN8g

Ann Althouse quotes some of a Washington Post article on this mini-controversy:

The tweet, styled as a direct quote, was shared by some people who did not verify it. Rep. Ted Lieu (D-Calif.) and CNN contributor Ana Navarro-Cárdenas shared it....

Bremmer initially defended the tweet, writing that he believed it was both obviously ludicrous “and yet kinda plausible.”... But he apologized Monday as media coverage grew, saying he had made the quote in jest....

Well, Bremner has withdrawn this, but how many "gaffes" by conservatives rest on the unsupported word of one MSM reporter?

Steve King was recently removed from a committee post because of something he "said" to an New York Times reporter who didn't tape it. King said had his words were twisted, but no one would listen, and so he was forced to apologize for something he hadn't said.

Roger Scruton was removed from a British government post under similar circumstances, when an interviewer tweeted out-of-context, "edited" quotes that could be called racist. See Betraying Steve King and Roger Scruton, by Gregory Hood, American Renaissance, April 15, 2019, and How the PC brigade took down Scruton, by Toby Young, StandpointMag, April 25, 2019.

The thing is, many quotes like this could be imaginary. There's no reason to believe that Karl Rove ever used the expression "reality-based community" (108,000 results in Google.) to describe opposition to action on Iraq. The phrase, which became an anti-Bush meme during the Iraq War, is based on the recollection of one man, NYT's Ron Suskind, who attributed it to an unnamed Bush aide in a 2004 article [Faith, Certainty and the Presidency of George W. Bush, by Ron Suskind, The New York Times Magazine, October 17, 2004]. Rove denies saying it, and there's only one witness: Suskind.

Perhaps he simply misheard a remark about "foreign policy realism", a genuine political tendency opposed to "foreign policy idealism". Or maybe he just made it up, like Bremner.

Did Steve Bannon really declare Breitbart News a platform for the alt-right? (26,000 results in Google.)

That's based on the recollection of one woman: Sarah Posner, of Mother Jones.

“'We're the platform for the alt-right,' Bannon told me proudly when I interviewed him at the Republican National Convention (RNC) in July.” How Donald Trump's New Campaign Chief Created an Online Haven for White Nationalists, by Sarah Posner, August 22, 2016

Maybe he said that, maybe he just said he didn't want to DE-platform them, like, say National Review would, and she misheard it. Or maybe she just made it up, like Bremner.

How many quotes like that are just made up? No one knows.