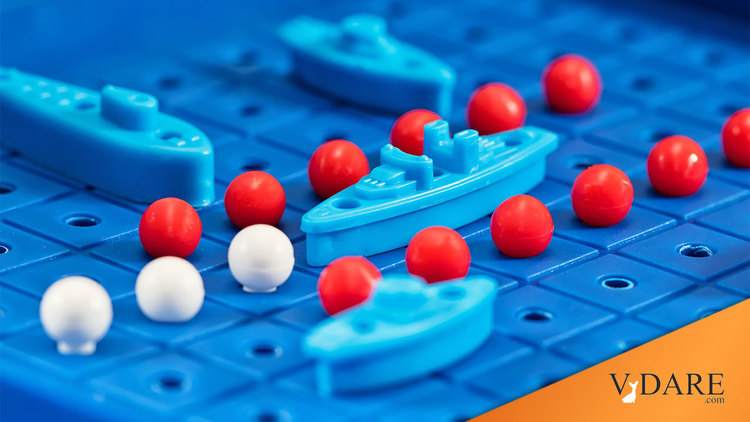 Earlier: Did the US Navy Lose a Light Aircraft Carrier to BLM Attack In 2020?

Diversity sunk my battleship. The Navy has gone from victory at Midway to disaster due to multiculturalism.

How would you even try to explain this insanity to those men who defeated the Japanese in the Pacific Theater?

‘Every officer is up to speed on diversity training. Not so much ship handling’: Scathing official report finds US Navy is too woke for war because of risk averse, politically correct, control-freak top brass, Daily Mail, July 12, 2021]

A scathing new report commissioned by members of Congress has claimed that the Navy’s surface warfare forces have systemic training and leadership issues, including a focus on diversity that overshadows basic readiness skills.

The report prepared by Marine Lt. Gen. Robert Schmidle and Rear Adm. Mark Montgomery, both retired, came in response to recent Naval disasters, including the burning of the USS Bonhomme Richard in San Diego, two collisions involving Navy ships in the Pacific and the surrender of two small craft to Iran.

The authors conducted hour-long interviews with 77 current and retired Navy officers, offering them anonymity to identify issues they wouldn’t feel comfortable raising in the chain of command.

The report found that a staggering 94 percent of the subjects believed the recent Naval disasters were ‘part of a broader problem in Navy culture or leadership.’

‘I guarantee you every unit in the Navy is up to speed on their diversity training. I’m sorry that I can’t say the same of their ship handling training,’ said one recently retired senior enlisted leader.

One of the key issues raised by the officers interviewed for the report was a concern that Navy leaders spend more time focusing on diversity training than on developing warfighting capacity and key operational skills.

‘Sometimes I think we care more about whether we have enough diversity officers than if we’ll survive a fight with the Chinese navy,’ lamented one lieutenant currently on active duty.

‘It’s criminal. They think my only value is as a black woman. But you cut our ship open with a missile and we’ll all bleed the same color,’ she added.

One recent destroyer captain said: ‘where someone puts their time shows what their priorities are. And we’ve got so many messages about X, Y, Z appreciation month, or sexual assault prevention, or you name it. We don’t even have close to that same level of emphasis on actual warfighting.’

‘While programs to encourage diversity, human sex trafficking prevention, suicide prevention, sexual assault prevention, and others are appropriate, they come with a cost,’ the report’s authors wrote.

It’s worth repeating: the Generals/Admirals/Top Brass of the Chinese and Russian military are laughing right now, knowing their greatest ally against the American military is our devotion to the idea “diversity is our greatest strength.”