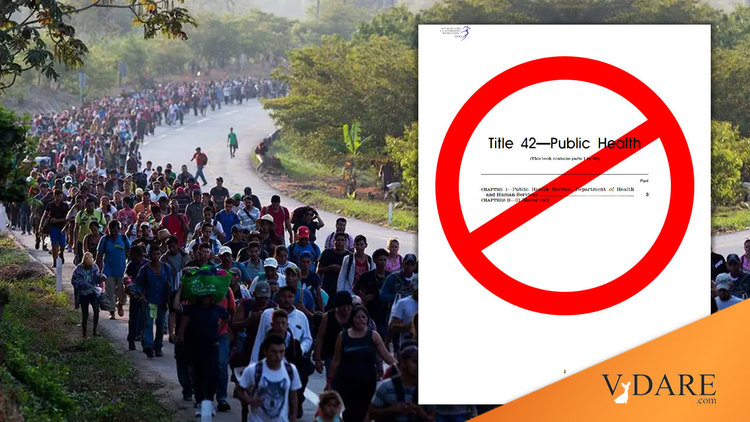 Last week, the chief of the Border Patrol, Raul Ortiz told CNN that he expected a surge of 8,000 “migrants”—Treason Lobby code for illegal aliens—for the next 30 to 45 days.

Well, the Department of Homeland Security delivered even more frightening news yesterday. It predicted a cataclysm in a telephone news briefing with reporters.

If the Biden Regime lifts the implementation of Title 42, the law that permits the expulsion of illegals on health grounds—in this case, the Flu Manchu—up to 18,000 illegals per day will cross the border.

Read that again: 18,000 every day. News reports didn’t say how long such a surge would last. But if it lasts as long as Ortiz predicted when the figure was a mere 8,000, by the end of 45 days, border agents will deal with some 810,000 illegals in just six weeks.

Based on the numbers thus far in fiscal 2022, which began October 1, officials expected border agents to handle more than 2 million by September 30.

Trump triggered Title 42, the Treason Lobby wants Traitor Joe to lift it to move forward with The Great Replacement.

The Centers for Disease Control was to have finished an evaluation of the policy today.

“Officials said they have run through three scenarios and the highest level of migrants coming across the border per day was 18,000,” ABC News reported [US bracing for influx of migrants at southern border if Title 42 revoked: DHS, by Luke Barr, March 29, 2022]:

They stressed it is only a prediction and they are prepared for anything. DHS has also established a joint information center with officials from across the federal government.

And it appears that Biden is ready to let them in, The Wall Street Journal reported:

The Border Patrol has made approximately 7,000 arrests each day in March, according to preliminary government data seen by The Wall Street Journal. That puts the U.S. on pace to record more than 200,000 arrests for March, the highest monthly total in at least 22 years, and more than a million for the first six months of the government’s fiscal year, Border Patrol Chief Raul Ortiz said at a conference in San Antonio on Tuesday.

The administration, through a task force it set up last year called the Southwest Border Coordination Center, is planning for several scenarios in which daily border crossings climb even higher, to as many as 18,000 per day, officials told reporters on a Tuesday call.

They are preemptively strengthening government contracts for transportation and medical care, the officials said, and adding more staff to handle increased arrivals. Gen. Glen VanHerck, the head of U.S. Northern Command, said at a Senate hearing last week the administration was weighing sending additional troops to the border.

If Let’s Go Brandon lifts Title 42, the GOP must impeach and remove him from office if the party retakes Congress and the Senate in November’s midterms.

But the party can’t stop with Biden. Republicans must also remove Vice President Kamala Harris so the new speaker of the House of Representatives becomes president. Whoever that is will, of course, fire Cuban-Jewish visa fraudster Alejandro Mayorkas.

After that, he must be prosecuted for refusing to enforce this country’s immigration laws.