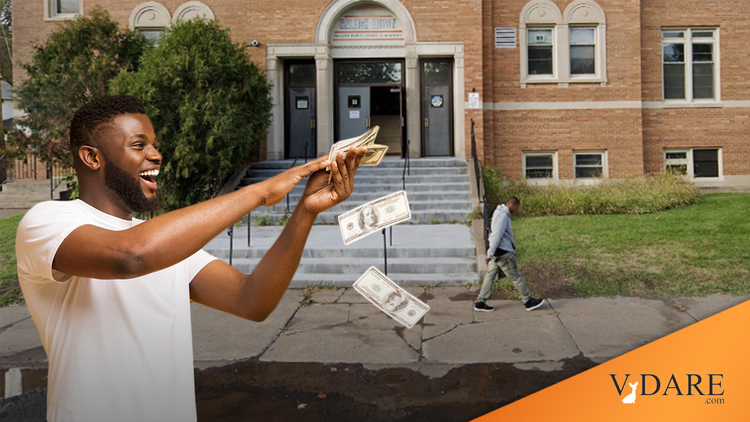 Can Blacks Squeeze $137 Million Out Of Duluth Schools?

The recent Tesla court case established that the latest going rate for paying off a black plaintiff for having to endure the agony of living in a multicultural society in which Hispanic, black, and perhaps white coworkers like hip-hop and thus use its vocabulary in your presence is $137 million.

But is the dingy-looking Duluth charter school district as deep-pocketed as Elon Musk? The suit, filed in April 2019, details a culture of racism at the Duluth Edison Charter Schools’ Raleigh, seen here, and North Star Academy campuses and school officials’ refusal to address it.

A group of parents is suing a Minnesota school system alleging that their Black children faced racist bullying and discrimination from students and staff, including racist slurs and physical attacks. One teacher allegedly cut off a student’s dreadlock and threw it in the trash, the parents say.

In the annals of science fiction, there are some pretty imaginative predictions of what would cause the next big war. But did any sci-fi seer ever come up with World War Hair?

“There’s been a lot of frustrated families in the Duluth Edison community,” said Rebekah Bailey, an attorney representing the parents. “The families in this case, all they really ever wanted is for their children to be treated fairly at school. They fought long and hard to remedy their individual situations as best they could through the system. This case was only filed when they exhausted those opportunities.”

Last month, at least two dozen nonprofit advocacy groups joined to file an amicus brief in support of the children and the lawsuit after an attorney for DECS requested to have the suit dismissed. The groups include the American Civil Liberties Union of Minnesota, the National Women’s Law Center, and many others.

Tim Sullivan, an attorney for DECS, told NBC News his office filed the request in August because “the facts gathered demonstrate that there is neither a factual nor legal basis to support the claims asserted against my client.”

The lawsuit said that white students bit, punched, kicked, pinched and spit on Black students and repeatedly called them the N-word. The white classmates also taunted them, calling them “negro” or “monkey” and telling them they “look like what’s inside a toilet.”

In 2017, a white student at North Star Academy threatened to stab a Black kindergartner in the eye with a screwdriver because she looked “different,” the lawsuit said. White students allegedly pinched and kicked the girl, who is biracial, on several occasions. And, during one bus ride to school, an older white student punched the girl so hard, she had a bruise on her rib, the suit states.

The girl’s father, Gilbert, approached school officials several times, demanding to meet and discuss the discrimination only to have staff avoid him and fail to “take any meaningful action,” according to the lawsuit.

In a statement to NBC News, Tammy Rackliffe, a spokesperson for DECS, declined to comment on the specific claims, but said the school system “strongly denies any allegation of discriminatory conduct and has vigorously defended itself against these false allegations.” …

There are 1,300 students at the two DECS locations, the school’s website states, and white students account for 78.6 percent of the school’s population, according to the most recent data from the U.S. Department of Educations’ Office for Civil Rights.

Something must be done about white students still making up a majority of charter school students in Duluth.

Duluth is a predominately white city, with Black residents accounting for 2.3 percent of the population, according to census data.

According to Raj Chetty’s immensely detailed findings, black parents with boys should move there.

According to the lawsuit, one Black student “was spit on so profusely by a white student that she had to change her clothes.”

“The white harassers received little to no punishment,” according to a statement from Public Justice, a nonprofit legal advocacy firm also representing the plaintiffs “And black and biracial students are punished more harshly and more regularly than their white peers.”

In other words, in the eyes of the adults observing these childish disputes, the black kids were the main troublemakers in these incidents. But, since we all know who are the Goodies (blacks) and who are the Baddies (whites), what various government employees observed with their own eyes in Duluth must be overridden by the racial biases of people who have never been within 200 miles of Duluth.

In Minnesota, Black students are disparately punished and suspended eight times as often as white students, according to the state’s Department of Human Rights.

As Dr. Prof. Ibram X. Kendi has proven, that can only happen due to racist policy.

The lawsuit says the school’s staff is more lenient with white students accused of harassment and school officials allegedly didn’t take parents’ concerns seriously. In an interview with Duluth News Tribune, Proctor said her son endured so much abuse that he told her he didn’t want to be Black anymore.

“It really breaks my heart because while all the other kids are dreaming of their life, he was dreaming of equality,” Proctor said, adding that she tried to work with the school to put an end to the harassment. “I wasn’t feeling that my voice was heard. They have policies and procedures in place, but I felt they really weren’t following through with what was being said.”

In other words, the school was doing exactly what its policies and procedures said it should do, but this black mom didn’t like the result.

The students discussed in the suit, who have all since left DECS, found support and comfort in Chrystal Gardner, then one of the school’s cultural liaisons, according to the complaint.

“Right away, I realized that there was an issue with the N-word being used so loosely at the school,” Gardner told the News Tribune. “A lot of the black students felt like if they even raised this concern, that nothing’s going to happen. And I sympathize with them and the parents who were offended as well, especially upon my bringing awareness of how hurtful that term is.”

Gardner repeatedly notified school administrators of the “racially hostile culture,” including an incident where students drew a swastika on a school bus, but nothing was ever done, according to the lawsuit. She recently settled her own lawsuit against DECS for wrongful termination, retaliation and discrimination after she was fired in June 2018 for complaining about the racist harassment the students’ experienced.

“At the school, I diligently provided support, resources, educational tools, and concepts from a cultural perspective,” Gardner told NBC News. “This was met with resistance, not always but more than enough. Nonetheless with valiant persistence, I aspired beyond my adverse experience at the school to assure the students of color had received an equitable and reasonable education deprived of interference to their success.”