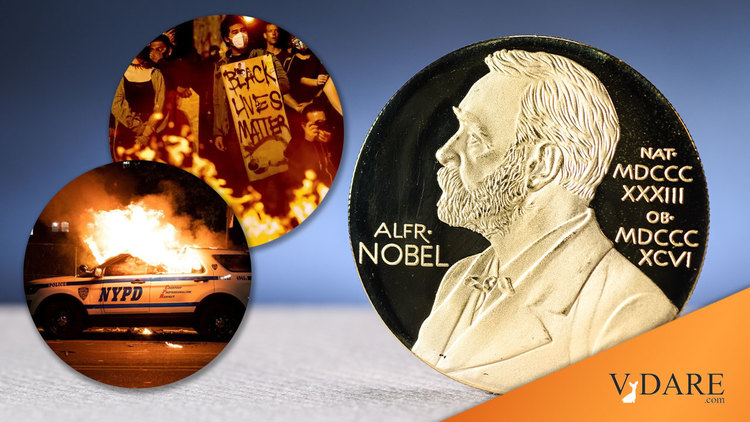 Earlier: The Peace Prize As The Special Olympics Nobel

From the Guardian news section:

The Black Lives Matter movement has been nominated for the 2021 Nobel peace prize for the way its call for systemic change has spread around the world.

In his nomination papers, the Norwegian MP Petter Eide said the movement had forced countries outside the US to grapple with racism within their own societies.

“I find that one of the key challenges we have seen in America, but also in Europe and Asia, is the kind of increasing conflict based on inequality,” Eide said. “Black Lives Matter has become a very important worldwide movement to fight racial injustice.

Like here in Norway, we didn’t use to have problems with blacks getting hassled by the police so much, but now we do. I guess we Norwegians are becoming more racist. Thank goodness for Black Lives Matter bringing us their brilliant American insights. I look forward to provincial Oslo soon being a great American-like city, like Detroit, with all that catchy Motown music.

“They have had a tremendous achievement in raising global awareness and consciousness about racial injustice.”

Eide, who has previously nominated human rights activists from Russia and China for the prize, said one other thing that impressed him about the Black Lives Matter movement was the way “they have been able to mobilise people from all groups of society, not just African-Americans, not just oppressed people, it has been a broad movement, in a way which has been different from their predecessors.”

The Black Lives Matter movement was co-founded in 2013 by Alicia Garza, Patrisse Cullors and Opal Tometi in response to the acquittal in the US of the man who shot Trayvon Martin. It gained wider recognition in 2014 following protests over the deaths of Michael Brown and Eric Garner, and was the wellspring of a series of global protests in 2020 following the deaths of George Floyd and Breonna Taylor.

… Eide, however, said he didn’t want his nomination for Black Lives Matter to be seen as a comment on domestic US politics. And he dismissed criticism from rightwing voices that the group had been behind violence in US cities. “Studies have shown that most of the demonstrations organised by Black Lives Matter have been peaceful,” he said.

“Of course there have been incidents, but most of them have been caused by the activities of either the police or counter-protestors.”

Republicans just love looting Air Jordans and Yeezys and they hate Starbucks so much they can’t resist smashing its windows.

Data assembled by the Armed Conflict Location and Event Data project in September 2020 showed that 93% of Black Lives Matter demonstrations involved no serious harm to people or property.

I actually looked at this database. As I reported in September:

If you look at the data behind this report, you will see this leftist group has characterized 617 incidents in the U.S. since the death of George Floyd as “riots,” with 598 falling in the subcategory of “violent demonstrations” and 19 of “mob violence.”

A few were unassociated with Black Lives Matter or Antifa, such as a July 21 brawl in Los Angeles between Armenians and Azerbaijanis. But the vast majority of the 617 riots were related to the media-proclaimed Racial Reckoning.

And then there is the little but Peace-related issue of the record-setting increase in murders since the death of George Floyd on Memorial Day. According to the Gun Violence Archive, gun murders were up 3,668 in 2020 over 2019, a 31% increase, with the great majority coming during BLM’s Racial Reckoning.

But you aren’t supposed to mention all the blood that Black Lives Matter once again has on its hands. That’s what got me suspended from Twitter: