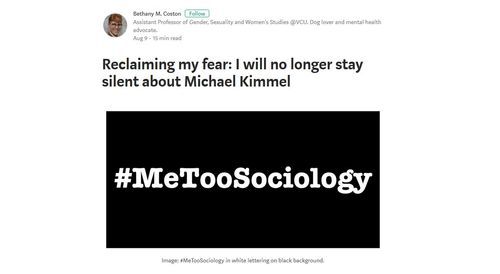 And Then They Came for Male Feminist Michael Kimmel

I’m familiar with the names of more social science professors than most people, but I’d never heard of “male feminist” sociologist Michael Kimmel. But apparently he’s a tireless self-promoter and big deal in Gender Studies, about as big a deal as a straight white man can get. But now he’s been Me Tooed by a former grad student of indeterminate gender (pronoun: “they”) named Bethany M. Coston. They says, at vast length, that Kimmel is just awful:

Reclaiming my fear: I will no longer stay silent about Michael Kimmel

… I am struck by the urgency of sharing this story. What follows is a detailed and intimate account of my six or so years working for and in the presence of Michael Kimmel — noted Sociologist and famous “male feminist” — who was recently named as a sexual harasser. While all accounts of sexual harassment, sexual assault, violence, and exploitation are horrific, what makes this case particularly toxic is that Michael has spent the better part of the last three decades becoming famous for telling other men how to be better, including contributing to field-specific knowledge on intimate partner violence and community-wide conversations on #MeToo outside of and even in the workplace.

I sat in silence for all these years for many reasons. …

But now, it’s time for me to break this silence….

But they’s essay seems to be mostly the usual grad student resentment of getting treated like an underling worker by a professor combined with Kimmel getting blindsided by World War T.

My eyes started to glaze over reading their’s essay, but I do recall that they seems upset that Professor Kimmel had been associated with putting quotation marks around the word men “men” in the phrase “pregnant ‘men’”. Yes, here’s the passage:

More than that, in a fairly recent call for papers for a book project with Dana Berkowitz on “Male Femininities” … the co-editors thought that the following topics were at all relevant to “male femininities” and to each other in a volume of pieces: “We seek to provide analyses of a panorama of male femininities. Thus, possible topics include, but are not limited to: Gender nonconforming and gender creative boys, transgender children, drag queens, gender fluidity in Non-Western cultures, gay fathers, men as full time caregivers, men as recipients of beauty culture and cosmetic surgery, feminine fashion for men, men in feminized workplaces such as fashion modeling, cosmetic industries, and nursing, among others, men as domestic laborers, transgender women in prison, male menopause and the couvade syndrome, pregnant “men”, effeminacy and gay men, Asian (gay) men, veganism and masculinity, feminist men, men in the WGS classroom, and sub-men in BDSM sexualities” [emphasis added]. I hope that most everyone reading this understands why I’ve italicized what I have

Of course. It goes without saying. The differences between the italicized problematic items and the non-problematic non-italicized items are self-evident.

and how deeply, deeply problematic this list is …. But, it doesn’t stop there

Anyway, in other World War T news, a fairly popular medical information website known as Healthline, based in, where else, San Francisco, has announced that the word “vagina” is increasingly considered transphobic and they’ll also be using the more inclusive term “front hole.”

I figured this was another Godfrey Elfwick hoax, but, no, it appears to be legit, or about as legit as this kind of thing can get.