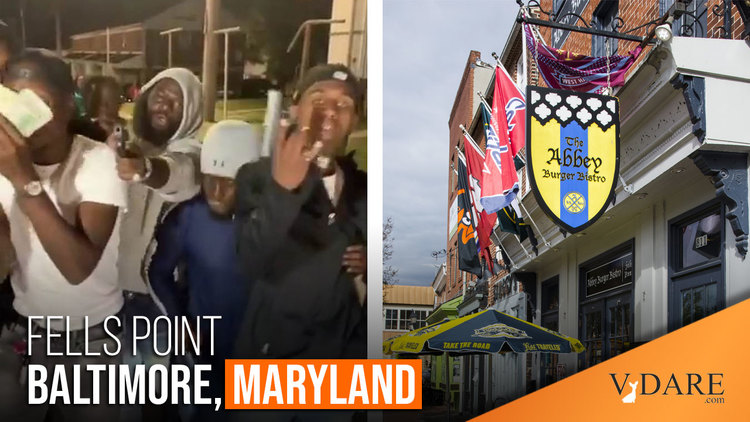 In a city approaching being 80 percent black, one of the whitest (and nicest) communities in Baltimore has reached its breaking point with 37 small business owners threatening to sop paying city taxes until something is done to combat the rising [black] violence.

Fells Point is 61 percent white, and with Baltimore’s demographics approaching 80 percent black overall, this neighborhood represents one of the few oasis of civilization in a city otherwise drained of Western civilization reserves.

The otherwise unmentionable monopoly black individuals collectively have on violence in Baltimore is driving small business owners in heavily black Baltimore to threaten a tax revolt. Call this a huge white pill.

It comes as no surprise to readers that dozens of Baltimore City businesses, located in the Inner Harbor, in a stretch called “Fells Point,” are threatening the new city government, run by Mayor Brandon Scott, with not paying their taxes because they’re “fed up and frustrated” with the outburst of violence.

What’s happening in Fells Point, known for its hipster pubs and taverns, as well as delicious seafood from the Chesapeake Bay, is experiencing an overflow of violent crime from other troubled areas.

The letter comes after three men were shot in Fells Point over the weekend.

“What is happening in our front yard — the chaos and lawlessness that escalated this weekend into another night of tragic, unspeakable gun violence — has been going on for far too long,” said the letter.

The 37 businesses are planning to place their city taxes in an “escrow account” and released them until these demands are satisfied:

The letter continued to say that minor crime that police “ignore” is what is contributing to more violent crime. So Marilyn Mosby’s halt on prosecuting petty crimes appears to be backfiring.

“When it comes to prostitution, public urination and defecation, and the illegal sale and consumption of alcohol and illicit drugs on the streets, we know these crimes are not as serious as the carjackings, shootings, and homicides that have become routine,” read the letter. “But, as this past weekend proved, a culture of lawlessness rarely remains confined to petty offenses and invariably leads to the kinds of violence and tragedy we witnessed late Saturday night.”

“Fell’s Point is one of the crown jewels of Baltimore. It has become the heartbeat of city commerce; its rich history, stunning views, and cobblestone streets make it a landmark destination for residents and tourists alike; and, at its best, it reflects the remarkable diversity and magic of Baltimore. But if there is a cautionary tale in the decline of the Inner Harbor and Baltimore’s Downtown, it is that where small issues go unchecked, it is only a matter of time before deeper problems take root and a neighborhood collapses.”

Here are the businesses and their owners, in alphabetical order, who signed the letter:

One name that rings a bell is “Alex Smith” of The Choptank, related to David Smith, the executive chairman of Hunt Valley-based Sinclair Broadcasting. Alex runs the Atlas group with numerous investments in Fells Point and the Inner Harbor. Sinclair owns hundreds of news stations across the country, and one, in particular, is Fox Baltimore, which launched “Project Baltimore” to expose the corruption in the city.

It wouldn’t be a surprise if the push behind the letter were by the Smiths, who’ve spent an enormous amount of money to revitalize downtown Baltimore.

But in an era of defunding the police and a liberal-run city that seems to be descending into another year of violence – the town is only going to get more dangerous, as we’ve explained over the past half-decade.

In response, some restaurants in the downtown area are exiting the city and headed to the suburbs where crime is almost non-existent.

This is happening nationwide, in city after city after city where black crime (only getting worse in the aftermath of the de-policing occurring courtesy of the insurrection in the name of George Floyd) is reaching historic proportions and business owners are seeing revenue dwindle into the red as white people head for the safer pastures of the suburbs.

As city regresses to the African mean, the standards governing western civilization are replaced by a completely different set of values and morality, leaving the dwindling number of white people in Baltimore with fewer and fewer options if they desire living in a civilized municipality. Because as white individuals vanish from Baltimore, so does the civilization they collectively created.