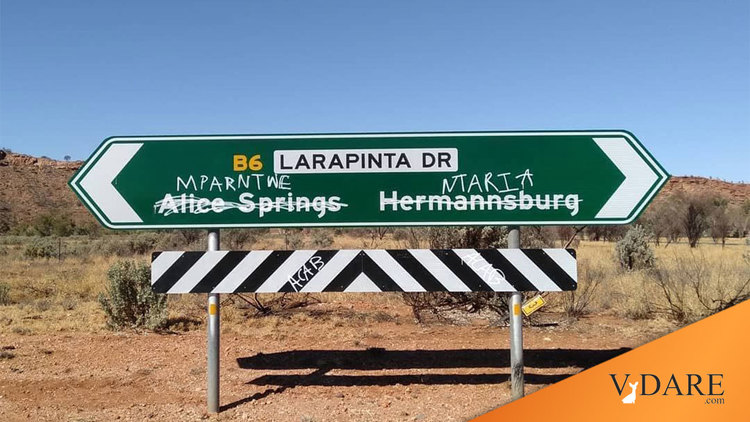 From: Phil Shannon [Email him]

The forces of woke Downunder won a glorious victory in the Great Place Names culture wars in Australia a couple of months ago and the news that Australia Post supports the use of aboriginal place names on mail has just filtered through to America (Australia Post is the Oz government equivalent of your US Postal Service).  Australia Post has surrendered to Rachael McPhail, a “Gomeroi woman” (sorry, a “proud Gomeroi woman”), by announcing that it will persuade Australian postal users to “include a traditional place name in the mailing address”[ Australia Post introduces address line for Indigenous place names after Rachael McPhail's campaign, Annie Lewis,  Canberra Times, July 5, 2021].

Following a campaign led by Gomeroi woman Rachael McPhail, Australia Post has agreed to support using traditional place names on mail, and has provided a guide on its website for how to formally include place names in addresses. #languageinthenews https://t.co/wyVqwEzIep

Australia Post’s national Indigenous Manager, Chris Heelan, a “Noongar man” (sorry, again, a “proud Noongar man), said that the initiative was a “fantastic concept to recognise traditional Country on their mail" (notice, by the way, how it’s jobs for the blacks with these ubiquitous BS positions).  The more hard-headed Aus Post execs, however, are hedging their bets on just how fantastic it is, and are carefully specifying the exact place on the address line where the aboriginal place name will cause least confusion, worried that a completely new line in the address field, which no one is familiar with, might just be a fantastic way to increase the number of items that get lost or delayed in the mail, and negatively affect their bonuses.

#Austpost How about you concentrate on delivering items on time?🙄🙄🙄https://t.co/r8rw0kJQyd

Still, woke loyalty rituals are de rigueur—thus Australia Post celebrates the traditional Aboriginal bona fides of Ms. McPhail, telling us that she has “stayed close to her First Nations roots by practising ways of decolonising her lifestyle.”  Decolonising?  We know she uses the white man’s internet (launching her campaign on social media) and she certainly uses wicked whitey’s cars and petrol and stuff because that’s how the place-names-on-letters idea came to her (“I often drive through Wiradjuri Country and I started noticing which councils acknowledge Country on their signage”)—probably whilst muttering “what have the Romans ever done for us?”