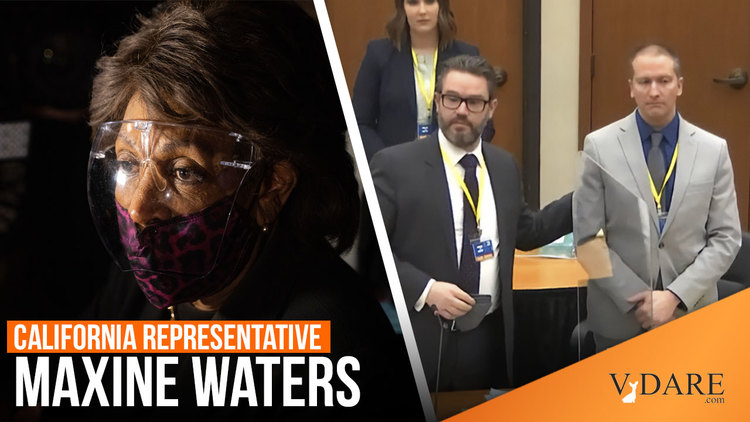 From: Fabrizio Evola [Email him]

While it may not seem like it, Maxine Waters just may have helped Derek Chauvin. Her comments ("urging protesters in Minnesota to 'get more confrontational' if Chauvin is not convicted") were so over the top, that Chauvin’s attorney moved for a mistrial. The Judge denied the motion, but indicated that Waters’ comments may have provided Chauvin with a “lifeline” on appeal [Chauvin trial judge says Maxine Waters' 'confrontational' protest remarks could fuel appeal, by Alex Seitz-Wald, NBC, April 19, 2021].

Even CNN felt that her comments were highly inflammatory.

Maxine Waters just made a volatile situation much, much worse - CNNPolitics https://t.co/8UcOBLkfXl

When I am defending clients at a jury trial, I always inform them that I am trying to create a “backstop.” One can never know what a jury will do. Even the strongest defense can be unpersuasive to a jury. However, if I can create a good record of a fundamental error that occurred during the trial, I have increased the chances for a reversal on appeal. Maxine Waters has provided Chauvin with an exceedingly strong argument that he was denied a fair trial.

There are two things that can happen: 1) Chauvin is acquitted, or 2) Chauvin continues his fight on appeal. If I were Chauvin’s attorney I would be quite happy with what happened. I suspect the prosecutor is livid. A good prosecutor would probably be trying to cut a deal because he knows the conviction is not likely to be sustained in the appellate courts.

Overall, it has been a good day for Derek Chauvin.