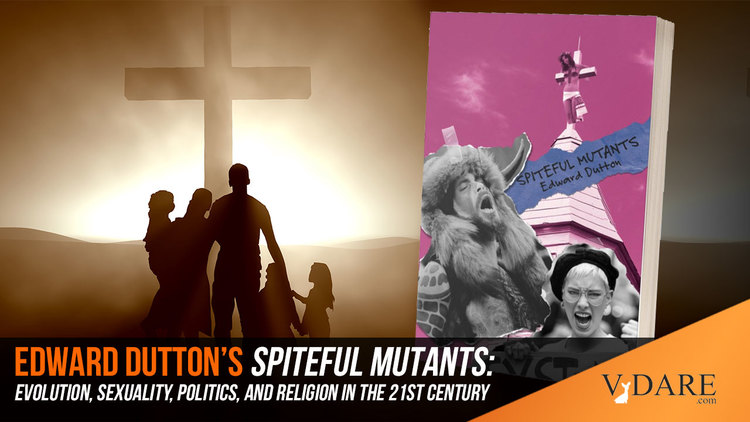 Dr. Edward Dutton’s latest book, Spiteful Mutants: Evolution, Sexuality, Politics and Religion in the 21st Century, is a collection of 10 essays that use evolutionary theory to explain the decline of the West. It is less narrowly focused than most of the author’s books (Sent Before Their Time, Making Sense of Race, Churchill’s Headmaster), and I warmly recommend it as an introduction to evolutionary thinking about cultural change, and to understand why Leftists promote mass immigration, the Floyd-Hoax-Black-Lives Matter riots, the mad rush to “transgenderism,” and the normalization of pedophilia.

Before 1800, only about half of children survived to adulthood. Those who did tended to be those with the fewest harmful genetic mutations. Then, within the course of a few generations, childhood mortality fell beneath one percent in most advanced countries. This meant that Darwinian natural selection ceased to operate. Children with harmful mutations began surviving to adulthood and passing on their unfavorable traits to offspring, a phenomenon known as “dysgenic fertility.” Since about 84 percent of the human genome relates to brain development, increased mutational load means that people began to think and behave in maladaptive ways. Compounding the problem, such people influence those around them, who might still be genetically healthy, to behave in similarly maladaptive ways. These are the “Spiteful Mutants” of Dutton’s title. Their behavior is “spiteful” because it damages others without bringing any advantage to themselves.

Dutton’s book focuses on two broad areas in which increased mutational load might give rise to maladaptive behavior: religion and sex. He proposes that the rise of sexual confusion and quasi-religious “social justice” movements such as Black Lives Matter are the action of Spiteful Mutants. Plenty of commentators have criticized such cultural trends. But Dutton’s evolutionary approach might explain why they are appearing in our society now and what must be done to fight back effectively. For at bottom the struggle could be as much biological as political.

Natural selection favors religious belief and practice because they help us cope with stress and promote such adaptive behavior as fertility, in-group cooperation, and hostility to invasive outgroups. Regarding the connection between fertility and traditional religious belief, the author remarks on the fate of young women he knew as an undergraduate at Durham University in the North of England. Some of these belonged to the Durham Inter-Collegiate Christian Union:

This was a fundamentalist, evangelical Christian group that eschewed drinking, premarital sex, and, indeed, all of the hedonism that tended to characterize undergraduate life. As far as I am aware, all of the females I knew in this group have married and had children, in most cases two or more. By contrast, a girl whom I knew who was cold, nihilistic, anti-religious and spent her undergraduate years doing little other than drinking and bitching about thinner girls, has definitely not married nor reproduced. […] This is Darwinian selection in action.

In essence, traditional religion identifies evolutionarily adaptive behavior with the will of God. Of course, religious ideas can also be maladaptive. A radically ascetic sect which rejects all sexual activity would obviously harm the evolutionary prospects of those who join it, and thus eventually die out itself. The Shakers are an example. But religions that have survived over long periods tend to be adaptive.

there are behaviors typically associated with religiousness—intolerance of disagreement, fervent belief, or casting dissenters as ‘evil’—which are alive and well and, if anything, seem to be increasing in frequency.

He suggests that contemporary “social justice” movements are maladaptive mutations of our inherited religious dispositions.

Some background: As societies expand from local kin-groups to larger polities of relative strangers, moralistic monotheism becomes adaptive as a social-bonding mechanism. The in-group grows to include all who worship the same god, and hence the domain of trust and altruistic behavior expands, giving the society an advantage over rivals.

Following the Industrial Revolution, mortality salience—preoccupation with the inevitability of death—declined, group selection broke down, individualistic ideals gained prominence, and traditional religion grew weaker along with the social bonding it had favored.

In such circumstances, religion also mutates. Some aspects of the old religiousness are discarded, while others might be intensified and redirected toward new objects. Marxist Communism, as many have observed, served some of the purposes of a religion in the lives of its followers despite its atheism. Nineteenth century romantic nationalism has also been interpreted as a “replacement religion”—one far more adaptive than communism [Martyr Cults in Nineteenth-Century Italy, Lucy Riall, The Journal of Modern History, June 2010].

Today, runaway individualism and the collapse of group selection has led to new substitute religions wherein Spiteful Mutants compete for prestige and power by attacking the interests of their own group and advocating for hostile outgroups and replacement-level immigration. This is so maladaptive that Dutton describes it as a death cult.

The personality profile of the new zealots is the opposite of the prosocial personality of the traditionally religious. They are selfish and disagreeable, hypocritical, narcissistic, mentally unstable, and prone to emotional breakdowns when challenged. This, in turn, explains why they are so easily “triggered,” and feel they must “cancel” those who threaten their beliefs or self-image.

“Those of us who stand against this trend,” cautions Dutton, “must be aware that we are not dealing simply with [opposition to] free speech, [but] with a religion, with all the attractions to human psychology inherent in it.”

Dutton devotes an entire chapter to interpreting the BLM riots that followed the overdose death of George Floyd as a maladaptive variant on the religious revival. Traditional revivals typically take place in the wake of wars and disasters, periods of elevated stress and mortality salience. They are spearheaded by persons high in anxiety, neuroticism, and mental instability; such disturbed mental states are alleviated through the highly emotional religious experiences that take place through revivals. Women are prominent in such revivals because they are higher in the relevant traits than men, especially in their late teens and early 20s (the author suggests that young women’s anxiety is an evolutionary adaptation to their need to “worry” about babies). Once a revival gets underway, a kind of snowball effect sets in, whereby more mentally stable persons join in through mimetic infection or fear of ostracism if they do not.

Several analogies between traditional Christian revivals and the BLM riots spring to mind. The latter occurred in the wake of the COVID scare and lockdowns, and young women assumed prominent roles. It should also be obvious, as Dutton notes, “that many of those involved—with their stereotypical unnatural colored hair and screams of righteous fury—are not mentally well.”

Negative coping is seen in participants’ conviction that the world is run by racists intent on keeping innocent black people down; protesters enjoyed a sense of superiority to “racists,” and perhaps even a conviction that they were bringing to birth a new world free of oppression.

BLM is, however, largely bereft of resources for positive coping, because white people can never truly be forgiven for the sin of racism.

The celebrities who felt compelled to jump on the bandwagon of BLM provided examples of mimetic infection and fear of ostracism.

Dramatically different from traditional religious revivals, however, were the flagrant violence and desecration of statues and monuments that accompanied the Floyd Hoax protests. But here as well, Dutton points to history. The first stirrings of the Protestant Reformation in Germany coincided with a period of serious famine. The result was the Peasants’ War of the 1520s, during which violent Protestant mobs plundered Catholic churches and destroyed their “idols.” As during the BLM riots, some authorities were reduced to preemptively removing religious art to appease the mob.

Dutton suggests another historical analogy for BLM iconoclasm: the Spanish conquest of Mexico, during which Hernan Cortes destroyed every Aztec idol he could find. Cortes found that this “left the Aztecs demoralized and less able to put up a fight. The previously certain, unique, and real system by which they made sense of the world—and in which they played an integral and positive part—was under assault.”

The BLM riots were a similar act of conquest. Notes Dutton:

[Statues in the West were erected] to honor highly group-selected people who have promoted the genetic interests of Europeans by expanding their territory and leading their ethnic group to victory over rivals. In a sense, such statues are sacred. To tear them down—to humiliate gods in broad daylight in full view of the public—is a means of asserting that the religion they represented no longer has any power, is no longer sacred.

Four chapters of Spiteful Mutants deal with sexual dysfunction: homosexuality, gender dysphoria, the rise of Japanese “herbivore men” uninterested in women or sex, and the pedophilia acceptance movement (apparently the next frontier). The author illuminates all these subjects with an evolutionary perspective absent from generic “conservative” cultural criticism.

Natural selection always triumphs in the end, however. The Industrial Revolution and modern medicine suspended its effects for a while, but it is now obvious that rising mutational load has replaced childhood mortality as the crucible of evolution. Ever fewer normal people seem able to resist the mimetic influence of Spiteful Mutants.

Dutton compares our situation to the classic Zombie-movie scenario in which the dead rise to attack the living, transforming them into Zombies in the process. Typically, a small uninfected group defend themselves from the quickly multiplying Zombified hoards and maintain a semblance of civilization.

In effect, the Zombie movie is a metaphor for the rise of Spiteful Mutants promoting maladaptive behavior among their own people. Only the genetically healthiest or mimetically best forewarned (e.g., by reading Dutton) will resist the new onslaught of natural selection. The future will belong to them.

Roger Devlin [Email him] is a contributing editor to The Occidental Quarterly and the author of Sexual Utopia in Power: The Feminist Revolt Against Civilization.