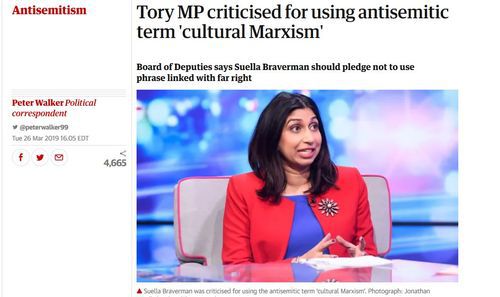 See, earlier, by Paul Gottfried: Yes Virginia [Dare], There Is A “Cultural Marxism”

Social Justice Warriors are obsessed with words. They instinctively understand that words aren’t just a means to communicate: they are thinking-tools—a way of expressing your individual and group identity. Political Correctness, in policing language, attempts to police people. It reduces their individuality, forces them to outwardly conform to the Multicultural Cult through speech, breaks their relationship with the speech (and thus culture) of their ancestors, and attempts to suppress heretical thinking tools. If people ignore the Left’s speech rules, this is dangerous because they might engage in wrongthink and because it implies they have lost their fear of the Multicultural Lord.

But events this week in the UK imply that the Left is increasingly frightened. They are so scared of their growing loss of power over people’s minds—as manifested in the Brexit vote, Trump’s election, and the increasing support for nationalism in Europe—that they are endeavouring to clamp down on a term that had never previously been unacceptable: “Cultural Marxism”, the process of critiquing and undermining a culture’s traditions in order to create a kind of “cultural equality.”

Suella Braverman (right) is a relatively young (38) Conservative Member of Parliament who resigned as junior minister late last year because of her opposition to what she saw as Theresa May’s “soft Brexit.” In a speech on Tuesday, she said:

We are engaging in many battles right now. As Conservatives we are engaged in a battle against cultural Marxism, where banning things is becoming de rigueur; where freedom of speech is becoming a taboo; where our universities, quintessential institutions of liberalism, are being shrouded in censorship and a culture of no-platforming.

After the speech, according to leftist Guardian.

…during a question and answer session, the MP was asked whether she stood by the term, given its far-right connections.

She said: “Yes, I do believe we are in a battle against a cultural Marxism, as I said.

“We have culture evolving from the far left which has allowed the snuffing out of freedom of speech, freedom of thought. No one can get offended any more, we are living in a culture where we are putting everyone in cotton wool, a risk-averse mentality is now taking over.

“And that instinct for freedom, for risk-taking, for making mistakes, for innovation, for creativity, is being killed. And it’s absolutely damaging for our spirit as British people, and our genius, whether it’s for innovation and science, or culture and civilisation; whether it’s for statecraft.” She added: “I’m very aware of that ongoing creep of cultural Marxism which has come from Jeremy Corbyn.”

This furore is a truly fascinating insight into how today’s Left thinks and into the fear that is gripping them, as well as their total lack of irony. Criticize their war on free speech and they attack your speech as unacceptable.

Labour MP Wes Streeting—a 35-year-old homosexual who was president of National Union of Students while it tightened the screw on campus wrong-think—proclaimed that the “ugly” term had “anti-Semitic connotations” and that “Members of Parliament should know better and she should apologise immediately or the whip should be removed”—meaning Braverman would not be able to stand as Conservative and so would likely lose her seat at the next election.

This is deeply disturbing and disappointing language to hear from a Conservative MP. In fact, it’s worrying that a mainstream politician would even have heard of such a phrase, which is usually championed by those on the extreme right. [Emphasis added].

One example Mulhall gave of a user of the phrase, thus promoting guilt by association: the Norwegian mass-murderer Anders Breivik.

But Braverman has, cannily, issued no apology—the correct response to bullies, who will up the ante if they sense the slightest fear. And, indeed, the “controversy” seems to have slipped from the headlines.

Clearly, the Left’s emotional reaction was provoked by a deep-seated insecurity that Braverman triggered.  Of course, she is correct that the Left has long been pursuing a program of totalitarian Cultural Marxism which involves “destroying freedom of speech, freedom of thought.” This is precisely the agenda of the terrorist-sympathizer Labour leader Jeremy Corbyn about whom MI5 was once very concerned. [Exclusive: MI5 opened file on Jeremy Corbyn amid concerns over his IRA links, by Claire Newell et al., Telegraph, May 19, 2017]

The Left’s anger at Braverman’s use of the verboten term reflects their alarm that mainstream politician would openly say this—evidence of the extent to which her social circle agree, as also manifested in relatively mainstream conservative journalists arguing in her defense that “Cultural Marxism” has long been an accepted term and that it’s ludicrous to claim that it shouldn’t be used just because “extremists” use it. [Don’t call Corbynistas “cultural Marxists”, By Brendan O’Neill, The Spectator, March 27, 2019]

More perilous still for the Left, Sue-Ellen Braverman, formerly Fernandes, is a herself member of their new inverted aristocracy. As a result of the Left’s success in indoctrinating the British people, she may well have particular influence precisely because she ticks the key “identity” boxes: relatively young (for a politician), female, childless female at that, ethnic minority (her parents’ are from Goa via Kenya and Mauritius), modest socioeconomic background, and multicultural (her husband is Jewish). These impeccably PC credentials—along with being relatively good-looking—mean that she’ll be listened to: “It’s okay to think such things if Suella thinks them.”

And even putting that aside, we have the comment of the Hope Not Hate “researcher” Joe Mulhall— who holidays in such overwhelmingly white places as Cumbria in England’s northwest and “never leave[s] London”.

George Orwell posited in his novel 1984 that, if you could regulate speech, you could literally stop things being thought. Mark Zuckerberg may well agree: Facebook has now banned “White Nationalism” from updates, along with  phrases about “immigration” and “separatism”. 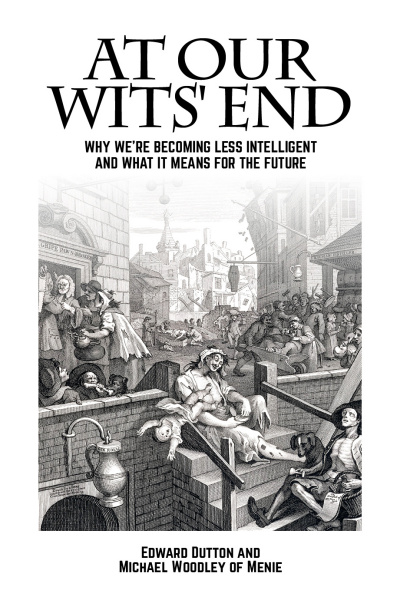 And it is true that words are “thinking tools”, meaning that if your vocabulary is limited you think in a less complex way, which can even reduce your IQ. [At Our Wits’ End, By Edward Dutton and Michael Woodley of Menie, 2018, pp.131-132]

But there is nothing particularly complex about feeling an affinity for your ethnic kin. It is one of the most basic and widely felt instincts that there is.  [Ethnic nationalism, evolutionary psychology and Genetic Similarity Theory, By. J. Philippe Rushton, Nations and Nationalism, 2005] Ban the term “white nationalism” and people will just innovate a new term.

This regularly happens when SJWs play for virtue status by arbitrarily outlawing as “insensitive” words which they have previously innovated: If the object of description is negatively perceived, the new word will always become insult.

Thus in the UK, the Spastics Society changed its name to “SCOPE” because “spastic” had become a playground insult. But “SCOPEY” quickly replaced this insult.

There is also nothing special about “Cultural Marxism.” Outlaw the term and it will just be articulated in different language. “Eugenics,” for example, is now “Genetic Screening.”

My optimistic view: The Left are gradually falling into a bunker mentality as more and more thinking people are finally beginning to see the poisoned harvest the it has sown. That Suella Braverman would publicly refer to the British Opposition as the Cultural Marxists that they are, and refuse to back down, is a very good sign.

The attack on Suella Braverman hasn’t worked. And it is delicious evidence that the Left may be beginning to lose the Culture War.

Lance Welton [Email him] is the pen name of a freelance journalist living in New York.