The Cold Civil War: Two Groups Of Whites Fighting Over America, With Minorities On The Sidelines

Even in the lull between big set-piece battles, there are raids and skirmishes going on. Here are some recent ones.

There are portraits of past presidents, former mayors, military heroes and others who had a significant connection to New York City.

Most of the subjects of those portraits were of course persons of whiteness. So: 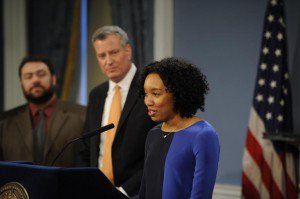 “The Mayor and First Lady believe the art at City Hall should reflect the vibrant diversity of New York City, and discussions on how to update the building’s collection to celebrate that diversity are underway,” Mayoral spokeswoman Marti Adams [pictured right] said Friday.

Do people still say “vibrant diversity” non-ironically? I guess they do.

There has been some timid push-back against the co-mayors’ proposal. 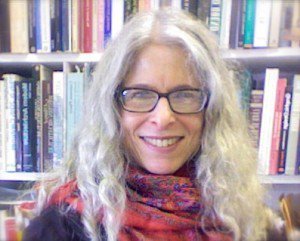 “The premise is stupid,” said Michele Bogart, [pictured white] an ex-vice president of the Public Design Commission, which oversees the portrait collection.

It’s not the insult to worthy municipal ancestors that bothers Ms. Bogart, though; it’s the missed opportunity to preach Politically-Correct sermons to City Hall visitors.

“You take down the dead white men because they represent something you don’t like in history instead of the portraits being a point of conversation. Use it as a teaching tool.”

Not even wrong. Russell Brand is a British showbiz airhead, a Lefty, of course, and rich, of course. Nigel Farage is the leader of the immigration-patriot U.K. Independence Party (UKIP) over there.

The two of them appeared recently on a TV program—I beg your pardon: programme—called Question Time, in which celebrities take questions from a studio audience.

One question was: “Is Britain really overcrowded?” Farage was the first panel member up:

If you have a country in which the population goes up as a direct result of immigration, what you find is not a shortage of green fields … you find a shortage of primary school places; you find a shortage of GP surgeries [i.e. general-practice physicians]; you find congestion, whether it’s on the roads, or the London underground [i.e. subway], or wherever you go … Having a proper immigration policy, controlling the numbers, doing what nearly 200 countries in the world do, namely controlling the numbers that come and the type of people that come, is the answer. [Applause].

The question passed to Russell Brand.

Brand went straight to the evils of capitalism:

There is a sense that there is a corrupt group in our country, using our resources, taking away our jobs, taking away our housing, not paying taxes, exploiting us. And there is … There was an economic crash and a lot of money was lost. His mates in the City [i.e. London’s financial district] farted and Nigel Farage is pointing at immigrants and the disabled and holding his nose. Immigrants are not causing the economics problems and suffering. (Loud applause from the mostly-white audience.)

Catch the harpy—white, of course—at 5m50s on the Politico clip shrieking that Farage is “a racist scumbag.”

These exchanges illustrate a number of things.

Foremost among those things:

Does Russell Brand really not know that all the world’s billionaires are united in support of Open Borders: that uncontrolled mass immigration is, to put it in Brit-speak, fundamentally a bankers’ ramp?

Yes—he really does not know. His immigration position is, as physicists say, not even wrong.

This tendency has come to Cultural Marxism from actual Marxism: from Karl Marx himself, in fact. The founder of Scientific Socialism was free with low scatological abuse against those he disagreed with.

If you have the patience to watch the other panelists responding to the immigration question on YouTube you also get a look at the cringing pusillanimity of British elites, at their eagerness to give away their country rather than be accused of harboring Bad Thoughts.

Even the speakers who think Britain is overcrowded hasten to assure us that immigrants are wonderful people who have enriched Britain immensely, and that the speaker’s view of the overcrowding topic has nothing whatever to do with race. Heaven forfend!

For a glimpse of non-elite opinion on the subject, see blogger Robert Henderson:

The think-tank British Future has recently published the report How to talk about immigration based on research conducted by [polling organizations] ICM, Ipsos MORI and YouGov …

One finding is truly startling. Faced with the question “The government should insist that all immigrants should return to the countries they came from, whether they’re here legally or illegally” the result was Agree 25%, disagree 52% and neither 23%. (P17 of the report). In addition, many of those who said no to forced repatriation were also firm supporters of strong border controls and restrictive immigration policies.

Got that? A quarter of British adults polled want all immigrants, legal and illegal, repatriated.

Segregation tomorrow? Political scientist Robert Weissberg, who wrote a fine perceptive book about education titled Bad Students, Not Bad Schools, has ventured to the edge of the PC precipice in The Unz Review, arguing for selective, “culturally sensitive” law enforcement in neighborhoods populated by lower-class blacks.

The logic of the argument leads Weissberg to propose an increase in voluntary segregation.

What all of this adds up to is that if avoiding large scale racial confrontations is the over-riding aim, race/class segregation is probably the best solution. Moreover, judging by the reactions of most African Americans living in overwhelmingly black cities, such non-coerced segregation is an acceptable cost/benefit arrangement … Those who doubt black antipathy to racial diversity need only look at their resistance to white gentrification.

Such freely decided segregation is undoubtedly cheaper than past (and failed) solutions like Urban Renewal, Empowerment Zones, Model Cities, Head Start, gold-plated schools and all the myriad efforts at eliminating the root causes of poverty and crime. And contrary to what Mr. Holder and President Obama insist, culturally sensitive policing will certainly out-perform national dialogues on race, mandatory sensitivity training , similar measures to alter America’s racist psychology. In a nutshell, the issue is not one of white police brutality; it is whose laws will be enforced. [Links in original]

Hey, maybe it’s worth a try.

John Derbyshire [email him] writes an incredible amount on all sorts of subjects for all kinds of outlets. (This no longer includes National Review, whose editors had some kind of tantrum and fired him. ) He is the author of We Are Doomed: Reclaiming Conservative Pessimism and several other books. His most recent book, published by VDARE.com com is FROM THE DISSIDENT RIGHT (also available in Kindle).His writings are archived at JohnDerbyshire.com.