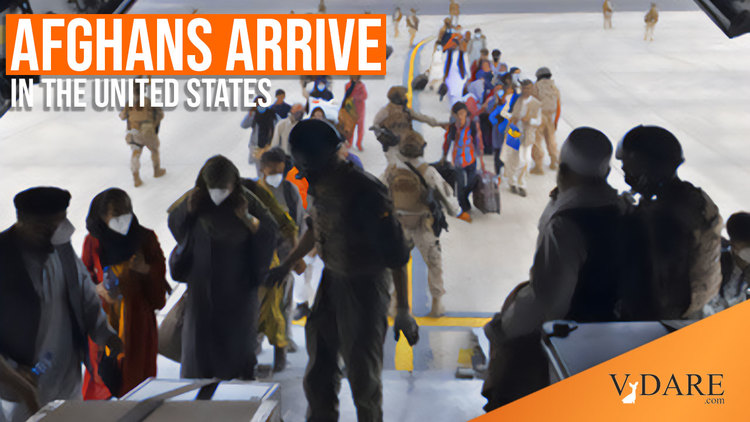 The Regime Media can hardly contain its glee as a flood of Afghan “refugees” enters the United States. However, why we are doing this is unexplained. Apparently, we have a “duty” to these “refugees” that surpasses basic considerations of public safety or political harmony. We have thus come full circle—we pointlessly fight them over there so we can bring them over here. Indeed, Americans still in Afghanistan can’t even count on “their” own government to try to get them out of the country. It’s as if American identity and interests are totally irrelevant. Because they are.

The scale of the settler colonization effort (“refugee resettlement” obscures the reality) beggars belief. Alexandria Ocasio-Cortez, Barbara Lee, and dozens of others in Congress want the refugee cap to be “no less than 200,000” [AOC, Progressives Urge Biden to Raise Refugee Cap to 200,000 Amid Afghanistan Crisis, by Jason Lemon, Newsweek, August 27, 2021]. Some Leftists are even urging that 1.2 million Afghans should be brought in. But, given that even the Stupid Party is blasting President Biden for not restarting the war, can we count on any resistance to this?

Of course, we shouldn’t have been spending those “billions” in the first place. The point of the Afghanistan war was not to provide Afghanis with welfare but to protect Americans from terrorism. It didn’t do that.

Our own borders remained open while American servicemen were being killed in Afghanistan for the benefit of outrageously corrupt local elites. They prudently collapsed the minute the U.S. government stopped backing them [The Afghan government was undone by its own corruption, The Economist, August 28, 2021]. American troops were even prevented from speaking out against our allies’ unspeakable practice of bacha bazi homosexual child rape.  Can our government even claim it was fighting for the right side in Afghanistan?

Providing American citizens with protection is the reason why we have a military, or any kind of a government at all. Any American political leader must always be careful about prioritizing any foreign people lest he commit treason against his own.

Of course, the fate of some who fought alongside American forces is tragic, and some Americans are acting on their own accord to save them [U.S. Special Operations Veterans Conduct Mission To Rescue Afghan Allies: ‘We Did What We Should Do,’ by Amy Furr, Breitbart, August 28, 2021]. Yet if the only effect of the intervention was to put these people in danger, why did we launch it in the first place?

Marines have been killed in a terrorist attack by the previously unknown group ISIS-K [Exclusive—Sean Parnell Blasts Biden: His Dereliction Of Duty Cost 13 American Families A Loved One, by Jacob Bliss, Breitbart, August 28, 2021]. (Apparently, we have different strains of terrorist groups now). Another attack may be coming soon [Biden: New attack against U.S. forces in Kabul ‘highly likely in the next 24-36 hours,’ by Lauren Egan, NBC News, August 28, 2021]. At the same time Vice smeared the Marine Corps of being full of neo-nazis and “extremists” (whatever that means, presumably just being white). The Biden Regime is purging the military of conservatives and Trump supporters.

But earlier the MSM was full of pictures of Marines bottle-feeding Afghans babies in what was clearly a PR stunt from the higher-ups [Video of Marine giving water to Afghan children goes viral: report, by Edmund DeMarche, Fox News, August 23, 2021]. Now it has backfired: the girl Marine was killed. The simultaneous failure to hold the Bagram Air Base until all Americans were evacuated shows that our political and military leaders were far more interested in managing media perceptions than Americans’ security. As of now, no one has been punished for this cataclysmic failure except one Marine Lieutenant Colonel who called for accountability [Marine Battalion Commander Fired After Blasting “Inept” Military Leadership Over Afghanistan Withdrawal, by Alana Goodman, Washington Free Beacon, August 27, 2021].

Supposedly, this surprise cession of Bagram, something the local Afghan commander wasn’t even notified about, was due to the need for operational security. That in itself is a damning admission that our Afghan “allies” couldn’t be trusted [US kept exact details of Bagram exit from Afghan commander for OPSEC, says Pentagon spokesman, by Howard Altman, Military Times, July 6, 2021]. So why should we be so eager to welcome them as “fellow Americans"?

I believe the exit from Afghanistan was overdue. But the specific plan (if there was one) was a catastrophe. Let no one say that the Trump Administration was “chaotic” compared to whatever President Biden is doing. In a shocking breach of faith, the White House may leave hundreds of Americans behind in Afghanistan [There’s a high likelihood that Americans will be left behind in Afghanistan, by Michelle Mark, Insider, August 26, 2021]. Meanwhile, more than 117,000 Afghans have been evacuated i.e., are coming HERE [White House says 117,000 people evacuated from Afghanistan since July, by Clara Hill, Independent, August 28, 2021].

Has the Great Replacement agenda of our rulers ever been so nakedly displayed, and the hatred and contempt for their own “fellow citizens” so exposed?

Of course, the well-funded (by you) Refugee Racket is eager to welcome “new Americans.”

And of course there is no reason to expect these “refugees” to benefit America. In Europe, they are already responsible for a massive crime wave. It was so bad that in 2017, even the appalling David French (!!!) noticed [Have Afghan Refugees in Europe Launched a “Rape Jihad?,” National Review, July 14, 2017].

He concluded by saying, “Our compassion must never make us fools.” Does he still think this? [Tweet him and ask.]

Various Islamic organizations in the U.S. are already  gearing up to welcome their demographic reinforcements. In a small town in swing state Wisconsin, the Biden Regime is going to dump thousands of Afghans, which means schools and local government will pay additional costs [Wisconsin towns await influx of Afghans–and wonder what it will mean, by Cleve Wootson Jr., The Washington Post, August 28, 2021]. “It will mean” means Democrats just got a lot more votes to hold onto the Blue Wall.

Will Afghans “assimilate” to American culture? We may be better if they don’t and stay in isolated communities, speaking only to themselves. After all, Ilhan Omar and Alexandria Ocasio-Cortez have assimilated to the dominant elite culture of anti-white hatred. Who can doubt that the Afghan refugees being brought in today will be complaining about “institutional racism” and the evils of “whiteness” tomorrow?

They’d be crazy not to. They are incentivized by the Regime to act this way. I’d rather they stay in madrassas than the far more radical U.S. public school system.

Teacher says the US flag makes her uncomfortable so she “misplaced” it and has students in the classroom pledge their allegiance to the trans pride flag. pic.twitter.com/bgEtwFoLTt

Importing Afghans just adds yet another permanent underclass to the country, furthering our transformation from a nation-state into a continent-wide slum. Two decades of “nation building” failed in Afghanistan. Arguably, more than two centuries of nation building have failed within the United States.

The American Dilemma—its race problem—has never been solved. A recent poll showed race relations within the United States at its lowest level in two decades. And that was after unparalleled cultural groveling before black Leftists [Ratings of White-Black Relations Hit New Low, Gallup Poll Finds, by Alexa Lardieri, U.S. News, July 21, 2022]. According to a recent poll, it is at its worst point in two decades. How will dumping a million or so Afghans improve the situation?

If you assume our Ruling Class is trying to improve the country, admitting unlimited Afghan refugees is naivete at best, stupidity at worst.

Maybe they believe in the “magic dirt” theory, that Afghans’ problems will suddenly disappear once they enter the United States.

However, I think it is something more deliberate—and sinister.

After all, these are the same people who are constantly telling us racism is embedded in our very institutions and cultural patterns. If that’s true, why would you be so eager to bring Afghans to a “systemically” racist country?

Answer: It is in the interest of the Ruling Class to create problems. These then require various technocrats and “experts” to manage them.

Just like some would say useless wars are waged because they benefit arms companies (what President Eisenhower called the Military-Industrial Complex), the Refugee Racket and Leftist activists eager to displace whites have an interest in these conflicts. They provide the rationalization for bringing in more refugees. The social problems, dependence on welfare, and conflict with whites are features and not bugs in the population transfer taking place.

The real question: why the Conservative Establishment is so silent about what is happening. Unbelievably, we seem to be returning to the days of the interventionist, post-September 11 neoconservative Right, with people like George W. Bush issuing statements bemoaning America’s abandonment of Afghani feminism and praising the NGOs that are “ready to help” bring Afghans here [Statement by President and Mrs. Bush on Afghanistan, George W. Bush Presidential Center, August 16, 2021].

The logical conclusion of this thinking: abolish borders altogether and admit everyone to America who wants to come. That will be just fine for the Bush dynasty in their gated haciendas.

For neoconservatives, America is simply a larger Airstrip One, a landmass from which to launch wars of choice. After losing, the federal government can import new “refugees” to keep wages low, housing prices high, and NGOs well funded. Like Frederick the Great’s Prussia, America has become an “army with a country.” Unlike Prussia, the values we spread are far more toxic and destructive.

The System that those U.S. Marines were actually defending was not worth one of their lives. The entire country of Afghanistan is not worth one American dollar.

Real Americans, who have no other home than this place and no country to flee to, must demand border security. This includes not only a refusal to allow Afghan refugees—but the expulsion of those who have already arrived.

If we don’t get that as a minimum, then there’s no reason to follow “American” foreign policy or identify with the Potomac Regime’s institutions.

We don’t have a stake in the Hollow Empire’s goofy adventures in spreading “democracy.” We are under no obligation to support a System that quite literally will provide aid to every other group in the entire world except us.

We have only one foreign policy interest, and that is stopping the next war. Otherwise, we’ll get hit with another wave of “refugees” after the Swamp’s next embarrassing defeat.