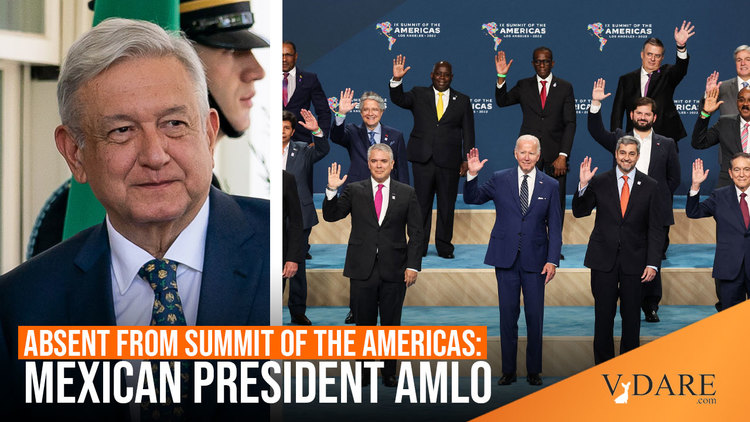 Summit Of The Americas Farce Shows That The American World Order Is Over. Time To Regroup

The “Summit of the Americas” that concluded last Friday may go down as marking the point when the United States of America lost its status as a superpower, and even its sovereignty. The U.S. did try to play its traditional role as regional hegemon by blackballing certain regimes, only to lose Mexican participation in the summit. The “Los Angeles Declaration,” billed as a regional partnership to “manage” immigration, in fact opened the door for an invasion and more theft from the American taxpayer [Los Angeles Declaration on Migration and Protection, White House, June 10, 2022]. In the face of American impotence, the Latin American Left is moving to unite against the gringos, welcoming a Russian and Chinese presence in the Western Hemisphere. And this was predictable. U.S. power abroad is crumbling because American identity at home has been deconstructed by a treasonous and illegitimate Ruling Class.

As America itself is an embarrassing afterthought to our Minority Occupation Government, the Biden Administration was mostly concerned about foreign policy at this summit. Its refusal to invite the leaders of Nicaragua, Venezuela and Cuba prompted Mexico and its president Andrés Manuel López Obrador to boycott the summit, essentially rendering it worthless [Mexican President won’t attend US-hosted Summit of the Americas due to exclusion of Cuba, Nicaragua, and Venezuela, by Kate Sullivan et al., CNN, June 6, 2022]. It would once have been unthinkable for Mexico to defy the U.S. so openly, but the Biden Administration’s incoherent foreign and immigration policies have created the perception of weakness. Having prompted an immigration crisis by refusing to enforce the law, the U.S. has given Mexico massive leverage by essentially outsourcing our border protection to AMLO. Yet that means AMLO can pursue his own foreign policy interests and embarrass the U.S. by very publicly snubbing it [Messy Summit of the Americas highlights contrast in US, China hosting styles, by Mark Magnier, South China Morning Post, June 12, 2022].

Brazil’s Jair Bolsonaro, a favorite target of American journalists, also nearly boycotted. He attended at the last minute only because Biden promised not to criticize him. Bolsonaro may lose his reelection campaign in October and be replaced by former leader Lula da Silva, but if anything that means he will resist U.S. pressure even more [The Summit of the America’s Was Meant To Counter China’s Influence. Instead, It Showed How Weak the U.S. Is, by Eloise Barry, Time, June 10, 2022].

Here we see the essential problem with the American center-left and foreign policy. Even as Progressives try to deconstruct the Historic American Nation, they expect Latin American leaders to obey El Norte as if we were still a superpower, or at least a functional First World country. We aren’t and so they won’t.

Of course, the Biden Administration did get its “Los Angeles Declaration” signed by about 20 countries, allegedly to deal with mass immigration. It’s a fitting title as Los Angeles can now only with black humor be called an American city. The Declaration defines immigration as a “hemispheric challenge” and vaguely alludes to making the process orderly. But it focuses on making sure migrants can get more legal rights in the countries they enter [Biden, Leaders Reach Migration Pact Despite Attendance Flap, AP, June 12, 2022].

One might find hope in the Declaration that countries will try to implement “safe, dignified, and sustainable return, readmission, and reintegration of migrants to help reestablish themselves in their countries of origin.” Countries will, in theory, do more to police their own borders and send back those who don’t qualify for asylum [Biden under pressure to deliver on migration agreement from Summit of the Americas, by Jeff Mordock, et al., Washington Times, June 12, 2022]. (And, in fairness, Mexico has also just broken up a migrant caravan—Mexico disbands migrant caravan that set out for U.S. during Americas Summit, Reuters, June 12, 2022]. “Self-deportation,” as even Mitt Romney said not that long ago, would solve many of our problems.

However, despite this promising rhetoric, the Migration Pact actually opens the door for more immigration to the U.S. from Latin America, as well as committing other countries to deal with the ongoing wave of failure migration from Venezuela.

Precisely because Venezuela’s domestic policies have been such a disaster, Venezuela now has power, dumping its dependent population on foreign countries like a kind of biological weapon. Naturally, this dysgenic policy will be rewarded by the U.S. Our tax dollars will now pay for “humanitarian and development assistance for refugees and vulnerable migrants across the hemisphere” [Fact Sheet: The Los Angeles Declaration on Migration and Protection U.S. Government and Foreign Partner Deliverables, White House, June 10, 2022]. There’s no money for an American border wall, but there is $314 million magically available to help settle Venezuelans in other Latin American countries [Additional $314 Million for U.S. Humanitarian Response to the Venezuela Regional Crisis, U.S. Department of State, June 10, 2022].

Colombia, a longtime American ally, is currently in a bitter runoff election between a right-wing populist and a far-left candidate, both of whom are expected to challenge American demands [Significant shift expected in relations between US, longtime Latin American ally Colombia, by Tracy Wilkinson, Los Angeles Times, June 12, 2022]. But either way, the Los Angeles Declaration commits Columbia to “grant regularization permits to 1.5M Venezuelan migrants and refugees in total, by the end of August 2022.”

Costa Rica and Ecuador are also committed to accept Venezuelan migrants; the U.S. (a.k.a. you, the American taxpayer)

That includes payments for the “extension of social services.”

This whole racket illustrates the absurdity of banning Venezuela from the Summit. A diplomatic snub, which didn’t even work anyway, is nothing compared to Caracas being massively rewarded by other countries who will accept, feed, and care for the hungry mouths that the country’s socialist system has failed. It provides a massive benefit to the Maduro government that it can simply export those unhappy multitudes who might cause discontent.

Having Americans foot the bill for a government that America is trying to overthrow may seem illogical, but our rulers’ hate for Americans may outweigh all other considerations.

A popular bumper sticker reads: “Work Harder, Millions of Immigrants Depend on You.” That understates the case. American taxpayers aren’t just subsidizing invaders in our own country, but in other countries as well. Canadians are also on the hook to the tune of $26.9 million in 2022-2023, as well as “welcoming” 50,000 agricultural workers and more refugee resettlement.

But don’t worry, America will also get some new vibrancy! The federal government managed to dig up $65 million to expand agricultural H-2A visa programs to address “current labor shortages in agriculture,” i.e., protect agribusiness from having to pay workers a decent wage. The U.S. will also “provide 11,500 H-2B nonagricultural seasonal worker visas for nationals of Northern Central America and Haiti,” again, to “address labor shortages.”

The White House’s Fact Sheet specifically praises Walmart because it “notes the importance of the H-2A migrant workers to U.S. agriculture.” [Link added]

Furthermore, the U.S., as part of the “Biden Administration’s strong commitment to welcoming refugees,” agreed to settle 20,000 refugees from the Americas during the Fiscal Years 2023 to 2024.

And there’s also a blanket statement that the “United States will increase resettlement of Haitian refugees” and “resume and increase participation in the Haitian Family Reunification Parole Program.”

Obviously, this will be an electoral boon for the Democrats. Haitian-Americans, despite getting Affirmative Action, still manage the impressive feat of having a lower median household income not just compared to Americans, but to foreign-born households [Haitian Immigrants in the United States, by Kira Olsen-Medina and Jeanne Batalova, Migration Information Source, August 12, 2020]. The genocidal 1804 Haitian Revolution notwithstanding, it seems Haitians are less concerned with showing what the world’s first black-led republic can do than with lining up to break into the still majority white United States.

What’s (almost) hilarious is that this humiliating groveling by the U.S. has not won it any diplomatic support. In fact, AMLO is seeking to unite Latin America as a bloc against the U.S. specifically to destroy the Monroe Doctrine [AMLO Wants a United Latin America, by Kurt Hackbarth, Jacobin, August 16, 2021]. Venezuela and Iran just signed a 20-year cooperation plan to help each other dodge U.S. sanctions [Under U.S. sanctions, Iran and Venezuela sign 20-year cooperation plan, Reuters, June 12, 2022]. Nicaragua, under President Daniel Ortega, has authorized the entry of Russian troops into his country [Nicaragua opens the door for Russian troops to land in Central America, MercoPress, June 10, 2022]. Given the Potomac Regime’s massive shipments of weaponry to Ukraine to kill Russians, it is hardly in a position to complain.

And of course, China, described as a “strategic competitor” by the Biden Administration, is increasing its partnerships with various Latin American countries, according to a May report from the highly credible Congressional Research Service [China’s Engagement with Latin America and the Caribbean, CRS, May 4, 2022].

In other words, as the U.S. surrenders its sovereignty and represses its own people to subsidize the Third World, the Third World responds with contempt and refuses U.S. appeals to oppose Russia and China.

And that may be the silver lining. The Potomac Regime is no friend of the Historic American Nation. The Regime’s hegemony over Latin America doesn’t benefit us. Indeed, Latin America’s contempt for Biden is something of an inspiration.

Perhaps this embarrassing Summit of the Americas will wake up a few actual Americans to a core historical truth: North America is an outpost of European culture in the Western Hemisphere. Our national interest, our civilizational interest, lies in forging closer ties with a revitalized Europe and rejecting the current Regime’s determination to turn us into just another Third World country.

That requires America rediscovering who we are—a Western, European nation. We must stop immigration from the south, deport those who have already arrived, remove legal privileges like Affirmative Action from non-white invaders, and support those areas of Latin America, like southern Brazil, that can also claim to be outposts of the West.

We must cast off the shibboleths of the postwar liberal order entirely, leaving not one stone upon another.

The Biden Administration, by trying to bully Latin America into toeing its geopolitical line while simultaneously opening the gates to thousands of resentful foreigners, shows America to be both arrogant and weak. It’s imperialist in tone and impotent in substance, the worst possible combination.

The fact that Americans are being taxed to pay for welfare programs for foreigners not just in our country but in other countries raises the question of what our government even does. Aside from trying to replace us with foreign dependents, pay for foreign dependents even in their own countries, lose wars, and send our money to other countries that lose wars, there’s very little substance to the federal government. It certainly doesn’t perform the duties of a real country, starting with border protection.

We can take some comfort that the postwar liberal order, which represses Middle America with far more vigor than any foreign country, is collapsing regardless of what we do or don’t do. It’s so rotten even those who benefit from it, its non-white client populations, won’t defend it.

We must hope that the current geopolitical order collapses while there’s still an America worth defending. That will be our opportunity.

Our task now is to keep the torch of American identity aflame and provide a fortress for those who will refound our country when that opportunity comes.

James Kirkpatrick [Email him | Tweet him @VDAREJamesK] is a Beltway veteran and a refugee from Conservatism Inc. His latest book is Conservatism Inc.: The Battle for the American Right. Read VDARE.com Editor Peter Brimelow's Preface here.