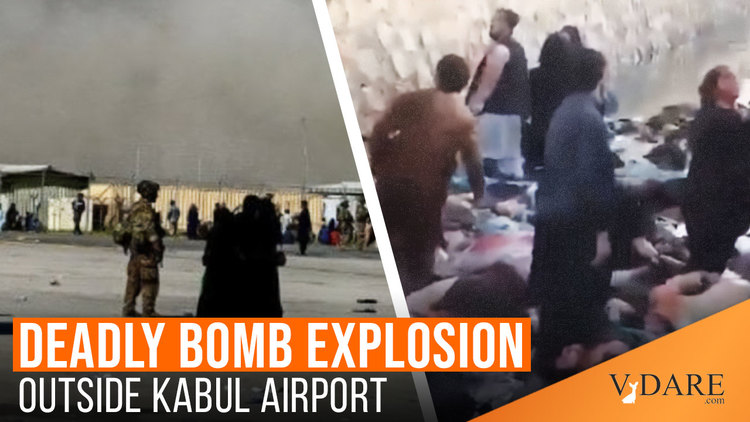 Patrick J. Buchanan: In Afghanistan, The Worst Is Yet To Come

Say what you will about President Joe Biden, he has stuck to his guns on ending America's 20-year involvement in Afghanistan's forever war.

His decision not to delay our departure after Aug. 31 was fortified by hard intel that the terrorist ISIS-K was preparing attacks at Kabul airport.

It now seems inevitable that the withdrawal will be completed by Aug. 31, with all U.S. military forces following the last civilians out.

Before yesterday's attacks, the airlift had been going far better than in its chaotic first days. Some 100,000 Americans and Afghans had gotten out of the country since Aug. 14.

Biden held his ground, refusing to be stampeded by Democratic critics, NATO allies, Republican hawks or media demanding he extend the deadline for departure until all Americans were out.

His adamancy testifies to the convictions Biden came by during decades at the apex of the U.S. government during our longest war.

Even if the end result of a withdrawal is that Afghanistan falls to the Taliban, the cause is not worth a continuance of the U.S. commitment or the blood and treasure that four presidents have invested.

Better to accept a U.S. defeat and humiliation than re-commit to a war that is inevitably going to be lost.

Biden's decision and the botched early days of the withdrawal have not been without political cost. Polls show the president's approval rating sliding underwater. A Suffolk poll has him down to 41%.

Yet, on his basic decision to get out now and accept the costs and consequences, his country appears to be with him. After all, former President Donald Trump was prepared to depart earlier than Aug. 31, and a majority of Americans still support the decision to write off Afghanistan and get out.

Still, we need to realize what this means and what is coming.

According to the secretary of state, 6,000 Americans were still in Afghanistan when the Afghan army collapsed and Kabul fell. Some 4,500 of these have now been evacuated.

The State Department is in touch with 500 other U.S. citizens to effect their departure. As for the remaining 1,000, we do not know where they are.

What does this mean?

Hundreds of Americans are going to be left behind, along with scores of thousands of Afghan allies who worked with our military or contributed to the cause of crushing the Taliban. And many of those Afghans are going to pay the price of having cast their lot with the Americans.

After Aug. 31, the fate of those left behind will be determined by the Taliban, and we will be made witness to the fate the Taliban imposes.

This generation is about to learn what it means to lose a war.

When the war for Algerian independence ended in 1962, and the French pulled their troops out, scores of thousands of "Harkis," Arab and Muslim Algerians who fought alongside the French, were left behind.

The atrocities against the Harkis ran into the tens of thousands. Such may be the fate of scores of thousands of Afghans who fought beside us.

Biden's diplomats may be negotiating with the Taliban to prevent the war crime of using U.S. citizens left behind as hostages. But we are not going to be able to save all of our friends and allies who cast their lot with us and fought alongside us.

Yet, while the promises of the Taliban are not credible and ought not to be believed, we are not without leverage.

As the New York Times writes, the Afghan economy is "in free fall."

The Taliban's desperate need is for people to run the economy and for money from the international community to pay for imports of food and vital necessities of life.

What will also be needed from us, soon after the fall of Afghanistan, is a reappraisal of America's commitments across the Middle East.

We have 900 U.S. troops in Syria who control the oil reserves of that country and serve as a shield for the Syrian Kurds.

How long should we keep them there?

We retain several thousand troops in Iraq. Why?

These are questions for which new answers are going to be needed.

Indeed, there will be a temptation to counter our defeat and humiliation with defiant gestures or precipitate action to restore our lost credibility. Henry Kissinger's advice on any such action today seems wise:

"No dramatic strategic move is available in the immediate future to offset this self-inflicted setback, such as by making new formal commitments in other regions. American rashness would compound disappointment among allies, encourage adversaries, and sow confusion among observers."

As for Afghanistan and the Kabul airport, there comes a time when even a great nation needs to accept the reality that Corregidor is lost.