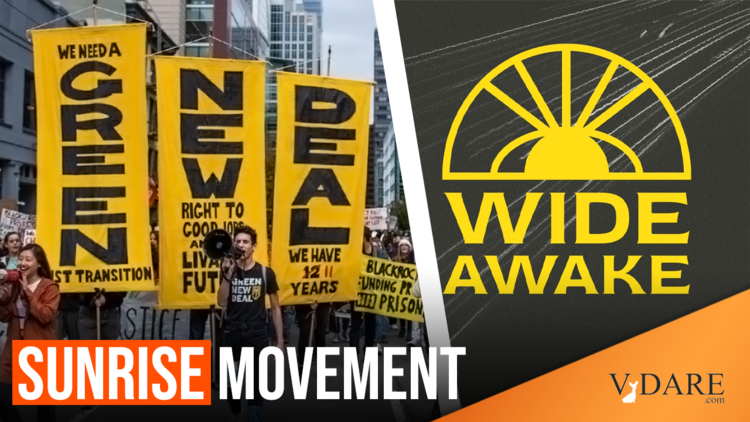 Wake up. The "community organizers" of the left are in full wildebeest mode. Now is not the time for bending down, rolling over or playing nice. From now until Election Day (and likely until the end of the year), you can expect screaming banshees carrying identical, preprinted signs to turn up in the middle of the night at the private homes of elected politicians, Donald Trump campaign and administration officials, law enforcement officers, judges and conservative leaders.

This is not conjecture. A nationwide agitation force milked the dead body of George Floyd to create the current anarchotyranny. Now, in keeping with her dying wish, the mob will use the fresh corpse of Ruth Bader Ginsburg to try to bully Republicans into submission over President Donald Trump's rightful Supreme Court nomination. The ultimate goal: obstruction and delegitimization of Trump's reelection.

On cue, a bunch of demonstrators all in matching yellow-and-black T-shirts from the Sunrise Movement turned out in front of South Carolina Sen. Lindsey Graham's house in Washington, D.C., this weekend, banging pots, pans and buckets. The disrupters also blasted airhorns, pointed strobe lights at the windows and crashed cymbals to punctuate their collective fit over Ginsburg's passing. Not a single one was arrested for disturbing the peace.

One organizer shrieked at Graham (who was not at home at the time): "You are an old white man desperately clinging to power that you can't hold onto much longer because we're coming for it. And in the meantime, you are not filling that Supreme Court seat. Not on our watch. The people will decide who fills that seat. No justice, no sleep!"

Shrieker Number One concluded: "We will vote, we will organize, we will strike, and we will keep showing up in your goddamned driveway at the crack of dawn to let you know that WE ARE WIDE AWAKE!"

Who is the Sunrise Movement? It's as organic as Spam and as genuine as AstroTurf. This full-time rent-a-mob is an adjunct of the Sierra Club (annual budget: $100 million; top donors: Michael Bloomberg, George Soros). The Sierra Club provided five-figure initial seed grants to Sunrise's educational arm, as well as Beltway office space. Other original funders of Sunrise: The Rockefeller Foundation and Wallace Global Fund (which has also contributed to the George Soros-subsidized Tides Center, Color of Change cancel culture guerilla warriors, and far-left legal policy groups Alliance for Justice and the Brennan Center for Justice).

According to Forbes magazine, Sunrise has 50 full-time staff and $6.5 million in funding. The Sunrise Movement's political arm "promotes social justice ideals" through sit-ins and neighborhood invasions. "Sunrise School" is recruiting students online on how to plan attacks on private property and get press coverage (like a glowing CNN report Monday that celebrated its "youth organizers"). The goal: "mass civil disobedience."

For the past three years, the group has established "Sunrise Movement Houses" where "fellows" ages 18-25 move into training centers in key electoral states. The Sunrise website boasts more than 400 "hubs" across the country, from Kodiak, Alaska, to Portland and Seattle, to Santa Fe, El Paso, Milwaukee, Detroit, Des Moines, Boston, Tampa and all points in between.

Most recently, Sunrise has trained its street performers for "defund the police" actions with illegal immigrant rabble-rousers from Soros-funded Mijente and Dream Defenders, as well as the Democratic Socialists of America's Afrosocialists. In July, Sunrise trainees descended on Senate Majority Leader Mitch McConnell's house in Louisville, Kentucky. This weekend, the drum-pounders targeted Graham as well as Sen. Thom Tillis of North Carolina. Republican Senators Pat Toomey of Pennsylvania, Cory Gardner of Colorado and Ron Johnson of Wisconsin are their next targets, as well Supreme Court short list candidate Barbara Lagoa.

They may look and sound like pesky, snot-nosed toddlers having harmless temper tantrums in black pajamas. But these professionally organized punks provide obstructionist boots on the ground for globalist Democratic billionaires and strategic cover for their violent antifa and Black Lives Matter comrades.

Wake up, smell the manufactured chaos, and vote to put these pot-banging brats and their donors in time out. Four more years.