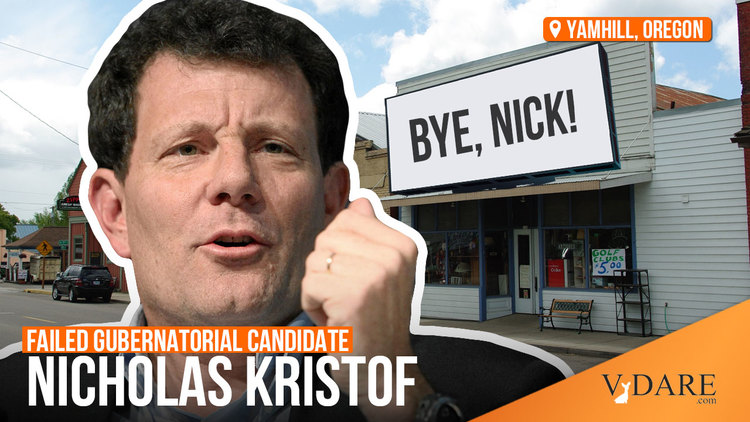 Maybe there‘s a small glimmer of hope for the Left Coast after all. First, San Francisco voters recalled George Soros–funded district attorney and crime-enabler Chesa Boudin. Now, even liberal Oregonians have kicked an East Coast media elitist to the curb and slapped “return to sender“ on the carefully crafted package of Nicholas Kristof‘s self-serving phony baloney.

Last October, the 63-year-old Nicholas Kristof [Email him] left his prestigious perch at the New York Times after nearly four decades to run for governor in the Beaver State, where he lived on a Yamhill farm from age 12 through high school graduation, a long, long, time ago. By February, his four-month fantasy stint as a Pacific Northwest political savior had come to a humiliating end when both state officials and the Supreme Court called bull on his preposterous claim of state residency. Last week, New York Nicky and the Times announced he was leaving Yamhill (or as I call it, Shamhill) and going back home—his real home—safely enveloped in the Grey Lady‘s bubble, protected from truth and accountability.

(I had this guy‘s number back in 2009, when I exposed how Kristof deceived readers about an Oregon cavernous hemangioma patient named John Brodniak and falsely claimed that he wasn‘t insured or being treated in order to transform him into a poster child for Obamacare—when, in fact, he was on Medicaid and had been under the care of top neurologists at Oregon Health Sciences University in Portland for nearly a month before Kristof published his propaganda in the New York Times. More recently, Kristof‘s sloppy promotion of fake sex-trafficking victims and violent water-carrying for Portland rioters was flagged by Ann Coulter. Fellow Fishwrap of Record prize-winning fabulist Walter Duranty would be proud.)

No matter how hard Kristof‘s high-priced campaign lawyers tried, they couldn‘t cover the stench of their privileged client‘s woke manure. In Lefty-Land, men can identify as women, women can identify as furries, and hate crime hoaxers can identify as victims until the cows come home. But in the real world, even in liberal Oregon, you can‘t identify as a state resident unless you actually are one—no matter how much you sincerely or insincerely “consider“ yourself one in your bleeding heart or calculating mind.

Naturally, Kristof‘s smarty-pants attorneys invoked the “racism“ card to try to delegitimize the state constitutional prohibition on non-residents running for state office. But you simply can‘t run for governor in Oregon if you haven‘t been a resident for three years. Kristof was required to have lived in the state since November 2019. But he left Oregon for the hallowed halls of Harvard and Oxford before joining the New York Times in 1984. Kristof voted in New York in 2020, maintained his primary home and work addresses in New York, did not have an Oregon driver‘s license, and only began spending time publicly at a family farm in Yamhill County when he was drumming up picture-perfect campaign buzz from his press cronies (while studiously avoiding the few journalists asking hard questions).

The entire Kristof family posed as apple cider and pinot noir entrepreneurs to boost their delicate-handed patriarch‘s “family farmer“ image. But one truth-seeking outlet, the Oregon Capital Chronicle, reported that paperwork for Kristof Farms LLC listed Kristof‘s wife, fellow former NYT journalist Sheryl WuDunn, as the sole member of the company—and that the firm appeared to have no state records of any employees.

“For 20 years living, working, raising his kids, holding a driver‘s license, filing taxes and voting as a New York resident until a year ago just doesn‘t pass the smell test,“ Oregon‘s Secretary of State Shemia Fagan put it bluntly.

Digging in his clown-shoe heels, Kristof lambasted the “failing political establishment“ for exposing his fake candidacy. But for all his bloviating about how much he considered Yamhill County his home, Kristof confessed to Politico that he didn‘t even know who the mayor of Yamhill was. She, however, certainly knew him and what he was up to:

Oh, and while wifey returns to New York, Kristof will hang out in Shamhill a little while longer to maintain the appearance of being a good ol‘ Oregon farm boy—and to finish his next book, a “journalistic memoir“ soon to be hailed by the New York Times and to top the New York Times bestselling book list for far longer than he was a consultant-manufactured gubernatorial candidate.

Chalk up the whole Kristof clown adventure as yet another noble public-service sacrifice on behalf of the downtrodden and voiceless. Get woke, never go broke.

Michelle Malkin [Email her] is the author of Invasion: How America Still Welcomes Terrorists, Criminals, and Other Foreign Menaces to Our Shores. Click here for Peter Brimelow’s review. Click here for Michelle Malkin‘s website. Michelle Malkin is also the author of Unhinged: Exposing Liberals Gone Wild, Culture of Corruption: Obama and his Team of Tax Cheats, Crooks & Cronies, Who Built That: Awe-Inspiring Stories of American Tinkerpreneurs, and Sold Out: How High-Tech Billionaires & Bipartisan Beltway Crapweasels Are Screwing America‘s Best & Brightest Workers.

Malkin is author of the book, “Open Borders, Inc.: Who‘s Funding America‘s Destruction,“ available directly from VDARE.com in hardcover. To find out more about Michelle Malkin and read features by other Creators Syndicate writers and cartoonists, visit the Creators Syndicate website at www.creators.com. COPYRIGHT 2019 CREATORS.COM