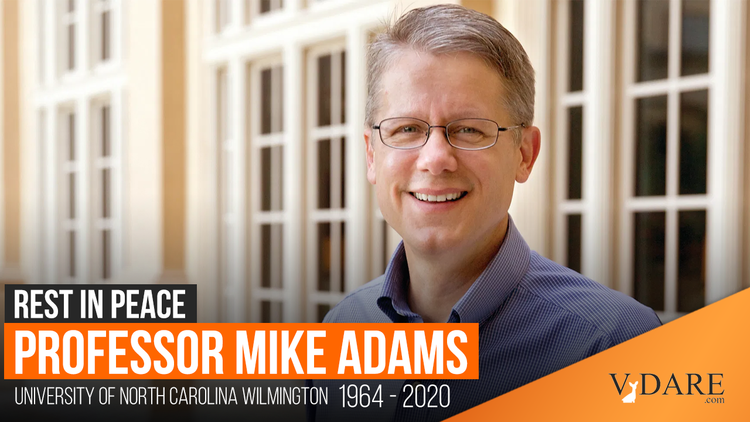 See also Mike Adams And The Battle For America

Michael Scott "Mike" Adams was a brilliant professor of criminology at the University of North Carolina-Wilmington. He was an unapologetic conservative who wrote prolifically and fought valiantly against the forces of political correctness and pure evil. He advocated with unbridled passion on behalf of the unborn. He trained his sharp tongue and prolific pen on radical feminists, campus liberals, racial demagogues, domestic terrorists and tyrants for more than two decades.

Adams taught and led by example.

In his books, columns and speeches across the country, he spoke truths—and he embraced The Truth. He died tragically and unexpectedly last weekend. The conservative movement and America the beautiful are worse off without his bright and unrelenting light.

News stories revealed that the 55-year-old academic and author was found dead of a reported gunshot wound on July 23 in his home in North Carolina. A worried neighbor had called police after receiving no responses from him for several days, during which he reportedly had been "stressed" and acting in an "erratic" manner. The best way I can honor him is to commemorate how he lived, not how he died.

Adams was a convert to Christianity who was a "doer of the word," as James 1:22 counsels us to be, and not just a "hearer." As a family obituary put it, "(A)fter seeing the mistreatment of prisoners while doing criminology research in a South American prison, Mike realized that there must be an objective standard of good by which we could make sense of evil and injustice. This helped lead him to Christianity, which dramatically changed his outlook." For 12 years, he mentored an estimated 15,000 students at Summit Ministries in Manitou Springs, Colorado.

In those summer seminars (and elsewhere at universities nationwide as well as on TV), the smiling and boyishly handsome professor taught students about the First Amendment and "fought fiercely to preserve the right to free speech for every American," Summit leaders wrote last week. "He was a soldier and a friend who was bold, committed to truth, and deeply invested in his students' success. Because of his stand for human life, untold numbers of babies have been saved. Because of his stand for free speech, many freedoms that were being lost have been strengthened."

Mike was forced to defend his own free speech rights in court and prevailed in a landmark discrimination case against his university, which was supposed to be a bastion of tolerance and free thought. His government-funded employer denied him promotions, despite rave reviews from students, as he became more emboldened and outspoken about his social conservative views. University officials admonished him to be less "caustic" in his expression and more "cerebral."

Translation: Stop being so relatably articulate and never, ever joke about liberal sacred cows!

His government employers argued that his columns on academic freedom, civil rights, campus culture, sex, feminism, abortion, homosexuality, religion and morality should not be protected by the First Amendment. A jury disagreed and Mike ultimately prevailed on appeal to the U.S. Fourth Circuit Court with legal representation from the Alliance Defending Freedom. The school was set to cough up a half-million-dollar settlement just before his death. The case had dragged on for seven years and certainly took an emotional and psychological toll as he battled viewpoint discrimination and retaliation.

It's not easy to be smeared, harassed, threatened and lied about daily by colleagues, students, administrators, neighbors and the media—all while maintaining a public "happy warrior" stance.

Yet, Mike soldiered on.

He was a compatriot and friend, whom I was honored to share the stage with many times over the years. We were not especially close but were kindred spirits who always greeted each other with warm smiles and hugs when our travels brought us together. Like me, he found respite in music. (He played guitar; I play piano.) His friend Lisa De Pasquale told me: "In our late-night chats, we were more likely to be talking about Rush the band than Rush Limbaugh. I will miss hearing him play guitar into the phone as he sat on his porch in the evenings."

Mike and I were also both enthusiastic climbers of the Manitou Incline, an extreme 2,800-stair trail that gains 2,000 feet of elevation over less than a mile on abandoned railroad tracks in the shadow of Pikes Peak. He likened physical training for the Incline to digging out of spiritual decline. In both cases, he reflected, "I had to step out of my comfort zone."

I deeply regret that we will not be able to climb the Incline together, but when I'm at the top, he will forever be in my thoughts and prayers. Two of his favorite verses that he recommended to students will also stay with me—James 4:17, which states, "Therefore, to him who knows to do good and does not do it, to him it is sin," and Hebrews 13:5, which reminds us that God "will never leave you nor forsake you."

Of the latter, Professor Adams urged students: "Remember when you read that verse that, quite literally, nothing else in life matters." Amen and rest in peace, dear warrior.