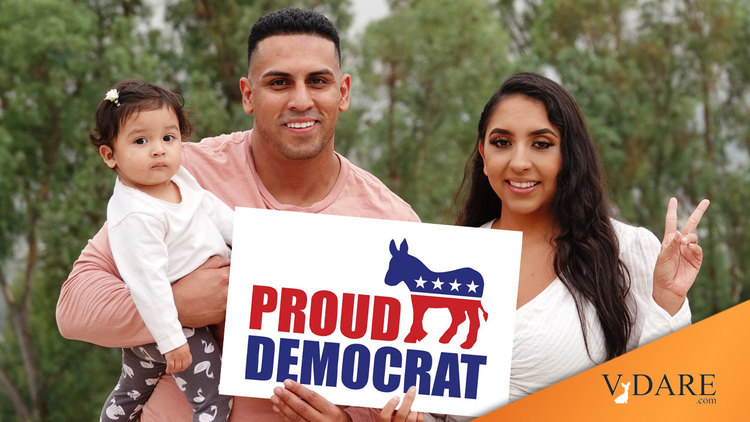 Memo To GOP/GAP: Karl Rove Was, Is, And WILL CONTINUE To Be WRONG About Hispanics

Texas holds its primaries today, March 1. “Republicans have been eyeing districts along the southern border since shortly after the last election, and the districts could be an early test of whether  Republicans can continue their gains among Latino voters,” Politico’s Zach Montellaro reports [What to watch for in Texas’ primaries,   March 1, 2022. Link in original]. Hispanics are not a monolith, of course, and the long-settled Tejanos of the Rio Grande Valley are particularly unusual. But any movement at all in the Hispanic vote at all will further convince GOP strategists that their long-deferred Karl Rove fantasy of mass conversion is finally coming true. I have news for them, as an Hispanic and an immigrant: it’s not. Whites remain the key to GOP victory.

GOP strategists are already excited that President Donald J. Trump made solid inroads with Hispanics in the 2020 election. Somehow, that proves the party must intensify “outreach” to make the party more “diverse,” although POTUS 45 did not Hispander to anything like the degree the strategists wanted. Of course, I’m glad to see my ethnic compatriots come to their senses. But let’s be brutally honest. Republicans won’t win a majority of the Hispanic vote anytime soon. The data are very clear on that point, and so Republicans must act accordingly and dance with the people who escorted them to the soiree: whites.

The Real Clear Politics Average of the 2022 Generic Congressional Vote comports with those findings. It shows Republicans with a 3.7-point lead over Democrats, 46.8-43.1. Republicans have prevailed in six of the last eight polls, including one by 9 points and another by 13.

But let’s focus on Hispanics and their party ID numbers. From January to June 2021, Democrats enjoyed a 32-point advantage over the GOP, 58-26. The gap narrowed only slightly from July through December. That margin was 28 points, 54-26. And, despite a 4-point decrease in Hispanics’ Democratic identification, Republican identification remained the same.

Hispanic party ID hasn’t changed for a decade at least. In 2011 it stood at 57 percent for Democrats and 31 percent for Republicans. Last year, it was 56-31.

In 2016, it looked even worse for the party of Lincoln. A whopping 62 percent of Hispanics identified as Democrats. Just 26 percent called themselves Republicans.

Thus, the most notable trend of the past decade is the decreasing percentage of Hispanics who identify or lean Republican. It went from 31 percent to 26.

That isn’t what I call winning. 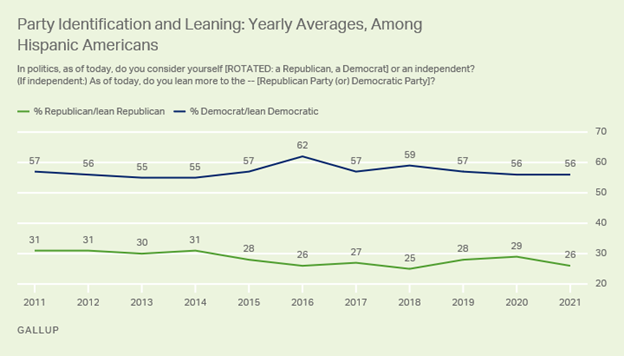 Granted, Hispanics have drifted toward the GOP in some midterm elections. But remember that midterms attract a different Hispanic demographic, that might not be as firmly committed to the Democrats as voters in general elections. During the 2014 midterms, for instance, a Red Wave year, Hispanics in Texas were roughly split; the margin was 48 percent for Democrats, 47 for the GOP [Hispanic Voters in the 2014 Election, by Jens Manuel Krogstad and Mark Hugo Lopez, Pew Research, November 7, 2014]. Immigration, along with the generalized criminal unrest that kicked off after the Ferguson riots, led to easy Republican gains.

Point is, moving Hispanics into the red column is a Herculean task. It’s not as completely futile as is moving the black vote, but as I have repeatedly argued, it’s a waste of time—and unnecessary. Any serious right-wing populist movement must focus on the white vote, meaning the Historic American Nation. The GOP is the GAP—the Generic American Party.

For some time, I’ve been quite bearish on the prospects of Hispanics joining the Republican fold because of the Republicans’ cucked way of addressing them. While I believe a right-wing, populist appeal that respects American identity and supports muscular law-and-order policies can attract Hispanics, Republicans will always crash into a limiting ceiling.

Those Hispanics—a vast majority, as the polling data show—are not pro–free market constituencies the GOP can attract with messaging about “socialism,” “tax cuts” and “limited government.” Hispanics like socialism and big government and will accept the taxes to pay for them, particularly given that whites shoulder most of that tax burden anyway. Thus, their economic self-interest lies in voting for Democrats.

That said, the GOP can make some inroads with the right populist message. Hispanics don’t care much for mass migration, and they don’t like the Democrats’ excessive pandering to blacks. Thus political demographer Ruy Teixeira has observed that Hispanics don’t support defunding the police or reparations for blacks [The Democrats’ Hispanic Voter Problem: More Evidence from the 2020 Pew Validated Survey, by Ruy Teixeira, Substack, October 7, 2021].

That is why I have argued (along with Steve Sailer) that the GOP must label the Democrats the “Black Party.” That message, strongly and consistently sent, might just persuade Hispanics to defect.

Still, Hispanics' right leanings only go so far. My instinct: Hispanics with ancestors who arrived here prior to or within a century of 1776, are obviously more “assimilated.” So they’re more receptive to joining political coalitions with white Americans. They have little in common in common with the 1965 Immigration Act generation, and they don’t sympathize with blacks. That might allow a self-interested marriage of convenience with whites.

Then again, continued Hispanic migration from Mexico and Central America is diluting what might be called this “Foundational Hispanic American” population. As a result, the Hispanic electorate will be mostly foreign and not receptive to protecting white American interests.

All this means the GOP-Right must resist the temptation of futile mass outreach to Hispanics. The GOP’s principal target must be white working class voters. The party must turn them into the Republican equivalent of black Democrats. Working class whites must learn that only the GOP will protect their interests.

It’s time for the GOP to think about the country it’s leaving behind to the descendants of its base—working and middle-to-upper class whites who work the hardest jobs, pay most of the taxes, and do most of the fighting and dying in wars.

Any other approach to elections is a waste of time. As well, it’s also a disservice to the white Americans whose ancestors bled and toiled to leave a great nation to their posterity.

The Historic American Nation should not be forced to live in a multicultural Clown World.

Pedro de Alvarado is a Hispanic dissident who is well aware of the realities of race from his experience living throughout Latin America and in the States.

As a native of lands conquered by brave Spaniards but later subverted by centuries of multiracial trickery and despotic governance, Pedro offers clear warnings to Americans about the perils of multiracialism.