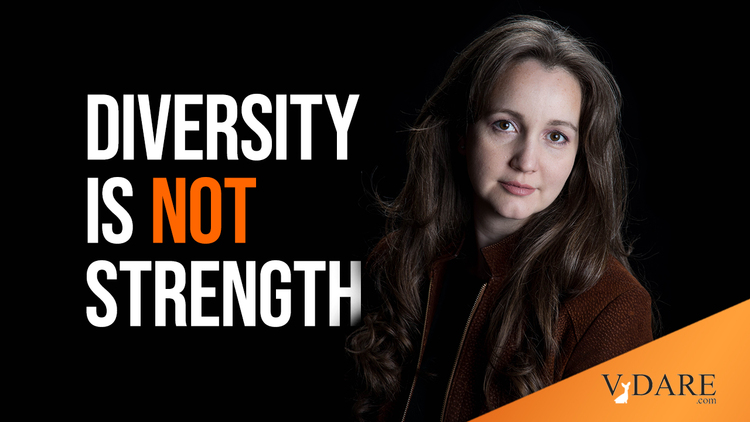 It is not often that I wake up in the morning to be told that one of my articles has been cited in a hit piece in the Washington Post [A ‘hate castle’ or welcome neighbor? VDare divides a West Virginia town, by Ellie Silverman, Washington Post, January 4, 2023 (Archive link)]. However, my appearance in just such a hit piece—specifically on the temerity of the VDare Foundation to own a castle in a small West Virginia town—is exactly what has happened.

Specifically, according to Silverman. my article exemplifies VDARE.com’s use of “racist pseudoscience to argue that White people are superior to other races.” That link, added by the Washington Post, goes to my October 2022 article Obama vs. Markle: For Mixed Race Children, It Matters If The Mother Is White Or Black.

Not only that, but VDARE.com’s Publisher Lydia Brimelow was pilloried in the article’s comments section for asserting in a podcast that “One of the things we talk about at VDARE. com is this idea that diversity is strength, which could not be less true…Diversity is weakness.”

According to many of the commenters, Mrs. Brimelow fails to understand that if you don’t have diversity then you have inbreeding and, naturally, this is a very bad thing. Here’s just one example:

The people that write such nonsense either willfully misunderstand what they are reading, are woefully ignorant of the latest scientific research, or both.

As for my piece, it simply presents the scientific evidence—brought together by a young  Chinese scientist—that when you have an interracial relationship between a black person and a white person, the IQ of the child tends to be higher if the mother, rather than the father, is black [Testing the Race of the Mother Hypothesis: Does Mother’s Involvement Matter for The Cognitive Development of Interracial Children?, Open Psych, September 8, 2022]. As far as the Chinese academic concerned—and I was merely presenting his findings—this is a fact. It is not making a value judgement; it is stating something based on the empirical evidence.

“Fact-value conflation” is an example of a fallacy. Fallacious argumentation fools people who have low intelligence or whose emotions overwhelm their intelligence due to their bias on a given subject, such as disliking VDARE.com and looking for evidence to back up this prejudice. I think you can guess which is true of Ellie Silverman, the author of the Washington Post hit piece.

As for the reactions to Mrs. Brimelow’s remarks, I’m afraid that in genetic terms it is simply inaccurate to claim that “diversity is strength.” An optimum level of extremely low diversity may well be a strength, but that is a very different statement.

Research from Iceland, where the entire population is small and so closely related, has found that the most fertile unions are between “third or fourth cousins.” But as you move away from this relatively close level of relatedness, in either direction, the unions become less fertile: people have more fertility problems and they have fewer children [An Association Between the Kinship and Fertility of Human Couples, by A. Helgason et al., Science, 2008].

This optimum balances together four factors:

So, Mrs. Brimelow is correct: Diversity is not inherently “a strength,” even genetically. In fact, a review article by British biologist Robin Fox has found that in all known species there seems to be a process whereby fertility levels are high when the populations are closely related but become low when populations get larger, and are thus more distantly related, resulting in population fluctuations over time in all known species. Fox summarizes this with the mantra, “Marry In or Die Out!” [Marry In or Die Out: Optimal Inbreeding and the Meaning of Mediogamy, by Robin Fox, Human Evolution and Society, 2015].

On this basis, you would predict that people who outbred to an extreme degree—such as by having a child with a person of a different race—would be more likely to have fertility problems. Races, after all, are breeding populations that have been separated, and have thus been endogamous, for many thousands of years, meaning that they are adapted to different environments and are very different from each other. Fox notes that such outbreeding is moving closer to speciation and, in general, separate species cannot breed because they are so distantly related that the genes do not recognize each other.

So the prediction about interracial couples, unsurprisingly, would be correct. Inter-racial couples experience elevated problems conceiving and remaining pregnant compared to monoracial couples in the U.S. [Association between maternal race and the use of assisted reproductive technology in the USA, by D. Ebeh & S. Jahanfar, SN Comprehensive Clinical Medicine, 2021].

Interracial couples also have lower fertility than do monoracial couples in the U.S. [Racial Pairings and Fertility, by Z. Qian & D. Lichter, Journal of Marriage and Family, 2021].

Even putting aside race, research has found that the female reproductive tract only lets in sperm which its immune system understands to be genetically compatible. Therefore, scientists have argued that when a couple cannot conceive one of the reasons is often that they are not sufficiently closely related. Such couples are more likely to find that the female immune system rejects the male’s sperm and, so, they are more likely to be infertile even if they are both perfectly healthy [Genetic incompatibility of the reproductive partners, by J. Kekäläinen, Human Reproduction, 2021].

Such a couple, in other words, is suboptimal in terms of “inbreeding vigor” and they are too high in “outbreeding depression.” They have failed to reach what Robin Fox calls “Mediogamy”—the ideal balance between inbreeding and outbreeding.

It is clear from Icelandic data that this balance involves sharing a set of great-great or great-great-great grandparents or being equivalently related by genetic chance.

So, in a multiracial society, this optimum definitely falls on the “diversity is not a strength” side of the line.

And that’s just the fertility consequences of anything beyond optimum low diversity. The social consequences, as Harvard social scientist Robert Putnam reluctantly found, are the breakdown of social trust, even among whites as they start to fear that other whites will collaborate with immigrants against them, and the collapse of all social goods and of civic society [E Pluribus Unum: Diversity and community in the twenty-first century, by R. Putnam, Scandinavian Political Studies, 2007].

It’s pretty clear then that the most that can be said is that, genetically, a very small level of diversity may be “a strength.”  Beyond that, it’s a liability.

Politically, of course, it is simply creating two Americas.

Diversity Is Strength
<< Previous
Next >>
LATEST