Paved With Good Intentions The Failure of Race Relations in Contemporary America, by Jared Taylor

[Peter Brimelow writes: While I congratulated American Renaissance's Jared Taylor on his outing Bill Buckley for cowardice on immigration (August 23, 2000), I realized that we hadn't posted my review of his remarkable book on race relations, Paved With Good Intentions. So here it is. That this book did not transform public debate on the topic is a signal condemnation of American intellectual life. All the major papers refused to review it, the Los Angeles Times saying frankly that it was impossible in the aftermath of the Rodney King riots. But Clint Bolick (see below) later observed to me ruefully that its effect had been profound on the conservative underground. National Review at least was prepared to put down a marker—back then.] 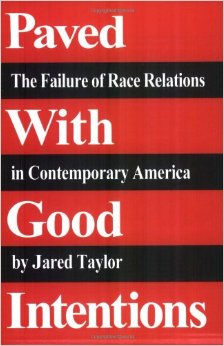 "WAS THE MUGGER black?" asked my wife sympathetically. As a Canadian newly arrived in Manhattan, she honestly didn't know that you must Never Ask. Her hostess, caught off balance in mid-crime story, admitted that he was. Then she hurriedly covered herself: of course, she said, this meant nothing.

Besides being a Canadian, however, my wife was and still is in some respects invincibly innocent. And now she was really puzzled. "But aren't most muggers in New York black?" she inquired. Her hostess was outraged. "I don't believe that," she snapped.

The single greatest strength of Jared Taylor's Paved with Good Intentions is its massive and merciless crushing of this type of hysterical denial, which currently paralyzes all discussion of race relations in America. Considered entirely by itself, this achievement makes his book the most important to be published on the subject for many years. In this area, experience shows that it is not enough to be mugged by reality. Footnotes are apparently necessary as well. And Taylor provides 1,339 of them, quarried from a remarkably wide reading of contemporary sources.

But isn't this because the police are racist? Apparently not. Taylor hunts down and extirpates all such infinitely regressing excuses, which have for too long substituted for thought in American political discourse. In this case, for example, he proves via a closely reasoned analysis, based on witness reports and arrest patterns for burglaries, traffic violations and drunkenness, that policemen of all races are, if anything, more lenient with criminals of a different race from themselves. (Which, of course, is just what you would expect, given current political pressures.)

Nor is the disparity caused by middle-class law enforcers over-concentrating on street crime. In 1990, blacks were nearly three times as likely as whites to be arrested for white-collar crimes such as forgery, counterfeiting, and embezzlement. And, finally and conclusively, blacks themselves are responsible for 73 per cent of all justified, self-defense killings. The vast majority of the people they kill are other blacks.

A fascinating Orwellian double-think enabled my wife's hostess to evade this reality—although in her conduct she certainly took account of it every day on Manhattan's streets. But this doublethink is no mere harmless self-delusion. As in 1984, it requires the constant support of an extraordinary censorship and self-censorship.

Media bias is a subject that easily becomes boring to sophisticates. But the inversions of truth here documented by Taylor are so extreme as to be pathological. Thus he is able to show that every one of the recent alleged white-racist atrocities—Howard Beach, Bensonhurst, Rodney King—had black-on-white analogies that went virtually unreported, although often far worse. For example, Taylor tracks several years of self-feeding press references to the heinous scandal of a white Stanford student hanging a caricatured blackface Beethoven on the door of a black student (who, as it happens, had insisted Beethoven was black). An entire "campus racism" industry has been called into existence on the strength of such trivia. But who has heard of the four black University of Arizona football players, three of them on scholarships, whose hobby of beating up lone campus whites landed them in jail in 1989?

Or for that matter of the Miami-based Yahweh cult, whose leader was convicted in 1992 for causing his followers to kill numerous "white devils"—without benefit of even a fraction of the network prime time devoted to endless reruns of the (dishonestly edited) King-beating video.

This powerful combination of internal and external compulsion is literally able to turn black into white. Thus in 1987 Tawana Brawley, the black teenager who claimed she had been abducted by a white gang, was able, despite the increasing absurdity of her attorneys' allegations, to focus the attention of the entire country on the supposedly grave issue of white-on-black rape. But in fact it was a complete chimera. In 1988, there were fewer than ten [PB in 2000: in fact, probably a few score] cases of white-on-black rape—as opposed to 9,405 cases of black-on-white rape. Taylor reports that black men appear three to four times more likely to commit rape than whites, and more than sixty times more likely to rape a white than a white is likely to rape a black.

Taylor's storm of statistics puts in perspective the view that blacks themselves are the chief victims of black crime. That claim is almost true. In America, blacks account for just under half of murder victims. Any decent person will feel a particular sympathy for respectable black people who are likely to suffer the effects both of black crime and of white suspicion prompted by black crime. But their plight is merely one consequence—though a harsh one—of the crisis of black society. Homicide is now the leading cause of death for black men between 15 and 44; one in four black men in their twenties is either in jail, on probation, or on parole. Syphilis is fifty times more prevalent among blacks than among whites; black children are twice as likely as whites to die in their first year.

And this black crisis still disproportionately hurts whites. Black criminals choose white victims in more than half of their violent crime; the average black criminal seems over 12 times more likely to kill a white than vice versa.

The second major contribution of Taylor's book is its frontal assault on the universal assumption that "white racism" is to blame for everything. In effect, he proposes a logical-positivist's test: since this racism is (as he demonstrates) publicly illegal, privately undetectable in opinion polls, and does not seem materially to affect the economic status of blacks once that status is adjusted for education and other variables, in what sense does it exist?

Taylor documents in immense detail that the U.S., far from suppressing its blacks and poor, in fact subsidizes them, publicly and privately, including more than $2.5 trillion in federal moneys alone since the 1960s. This, notoriously, has done little good and much ill. But it is hardly the behavior of a racist society—unless liberal politicians, welfare bureaucrats, and academics have deliberately sought to destroy black society by spreading dependency and pauperism.

The truth may set us free. But it can also make us sick. Many people will unquestionably find Taylor's ruthless exposition of black failure more than they can stomach. One such is the Institute for Justice's Clint Bolick, who has written very sensibly about civil rights, but who recently reproached Taylor in the Wall Street Journal for dismissing "the continuing impact of racism, which most blacks face every day of their lives."

Grant that blacks suffer occasional slights, crude name-calling, and some discrimination. But how damaging are these compared to the self-inflicted wounds of black America? And what prompts this white behavior? Is endemic white racism any more reasonable an explanation for the situation than endemic black criminality and the defensive nervous hostility it produces among whites?

"Race is the great American dilemma," Taylor writes, echoing Gunnar Myrdal's famous survey, An American Dilemma. Nearly fifty years later, Myrdal's panacea of integration, equality, and confident social engineering has been followed by disaster. This news could not be more unwelcome. It is hardly surprising that both Left and (alleged) Right prefer to cling to the myth of a culpable—but therefore at least in theory correctable—white racist America.