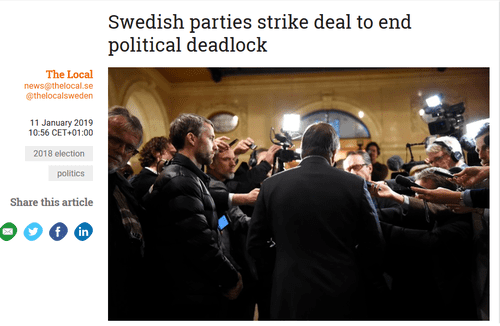 Immigration Patriots Are Breaking Through Sweden’s "Cordon Sanitaire." What About America’s?

After last September’s election, I noted that the immigration patriot Sweden Democrats had scored well enough to leave the Riksdag (= Parliament) in chaos, with neither the Right nor Left party blocs able to form a government without Sweden Democrat support, either open or tacit.  It has indeed taken four months, and several false starts, for a government to be formed. It still excludes the Sweden Democrats, despite that fact that with 17.6% of the vote they are now Sweden’s third biggest party, because of the peculiar European institution of the cordon sanitaire, by which Establishment parties agree to shun new nationalist parties, even if (as in Sweden’s case now) it means shamelessly depending on Communist support. But Sweden’s “coalition of the losers” is weak and unpopular. The cordon sanitaire may soon break down, as it has elsewhere in Scandinavia.

The question for Americans: how long will the U.S. form of the cordon sanitaire—which basically bans defense of white interests, or even of “Western Civilization”—last?

On January 18th a new government was finally approved by the Riksdag. Its Prime Minister? Step forward, again, the previous Social Democrat Prime Minister, Stefan Löfven, who opened the floodgates to hordes of Islamic rapists, child-groomers, criminals and spongers in 2015, contributing to the Sweden Democrats’ rise and his own party’s lowest-ever vote share (28%), causing the political deadlock in the first place. 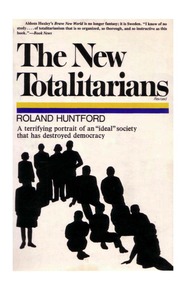 The Social Democrats only cling to first place because they effectively established Sweden’s “soft totalitarian” state, which their party led for decades, by which many older Swedes were indoctrinated and to which they are blindly loyal. The Social Democrats’ coalition partners, the Liberals, only narrowly made it into parliament at all, getting 5.5% of the vote—something even more starkly true with the other coalition member, the Greens, whose vote fell to 4.4%, only just above the 4% threshold.

Thus Lofgren’s minority government represents only 38% of the voters and holds only 136 of the 349 Riksdag seats. It depends on tacit support from parties outside the coalition. But Sweden’s political Establishment was getting desperate. Fresh elections would have to be called if this government was rejected by the Riksdag. And the Sweden Democrats’ vote was predicted to increase, and the centrist parties possibly vanish, if that happened. [Swedish parties strike deal to end political deadlock, The Local, January 11, 2019]

So a minority government was formed and the holy cordon sanitaire maintained around the toxic Sweden Democrats.

But in a poll for the large newspaper Svenska Dagbladet, 53% of Swedes said that the mainstream parties should give Sweden Democrats influence over the government. Only 39% supported the cordon sanitaire.

In other words, its days are numbered—particularly because Lofgren’s government, dependent on the Left and excluding even the second-largest Moderate Party (19,84% of the vote), will not be able to respond to the immigration issue.

There is academic debate over why these cordon sanitaires exist in different countries. In neighboring Denmark, Norway and Finland, the “mainstream” parties have all been prepared to work with the “far right.” One study found that the correlation between how extreme a “far right” party is in its national context explains 40% of the variance in how strongly it is excluded. [Party as Pariah, By Joost Van Spanje & Wouter Van Der Brug, Western European Politics, 2007]

Sweden is significantly further Left, meaning that policies that would be just about “acceptable” elsewhere are not in Sweden.

Another study noted that the “far right” parties in Sweden’s neighbor-countries all began life as anti-tax or “populist” movements. Immigration was, earlier than in Sweden, no longer a taboo issue. And the “far right” was taking votes from the mainstream parties. All of this compelled the mainstream to cooperate with them. [Strategies of mainstream parties towards their right-wing populist challengers, By Anne-Sophie Heinze, Western European Politics, 2018]

In Sweden, by contrast, the Sweden Democrats can arguably be traced back to radical right elements in the 1940s—thus Wikipedia says “it is generally agreed (also by the Swedish Committee Against Antisemitism and by Expo) that SD has never been a Nazi party, although various connections have existed through some of its former members.” [links in original]. Sweden Democrats did not take votes from mainstream parties—instead it mobilized non-voters and the young—and it operated in a context in which mainstream parties were still able to avoid discussing immigration. All this allowed for a cordon sanitaire to be created.

The archetypal example of the cordon sanitaire was in Belgium, around the Vlaams Blok (now Vlaams Belang). It had a pedigree in Flemish fascism, in the 1990s immigration was not yet a major political issue, it garnered support from former non-voters rather than from the mainstream parties, and it was radical (advocating the breakup of Belgium). As this situation changed—it has been legally forced, for example, to drop policies of forcible repatriation—then, within Flanders local government at least, the cordon sanitaire has been broken

But in Sweden this is all changing. Immigration is now openly debated.  The Sweden Democrats, they have constantly purged their own “extreme” members, and they are now taking the votes of other parties.

This change was evident in the post-election effort by Sweden’s conservative Moderate Party to form a minority government that would have been effectively propped up by the Sweden Democrats. The Swedish Left succeeded in vetoing this—for now. But the cordon sanitaire is clearly disintegrating.

“All around Europe, extreme right-wing movements are spreading. In several countries, forces with an antidemocratic agenda have made it all the way to government. But in Sweden we stand up for the equal value of all people. We are choosing a different path,” Löfven told the Riksdag. [Stefan Löfven welcomes start of “historic” era in Swedish politics, The Local, January 21, 2019] 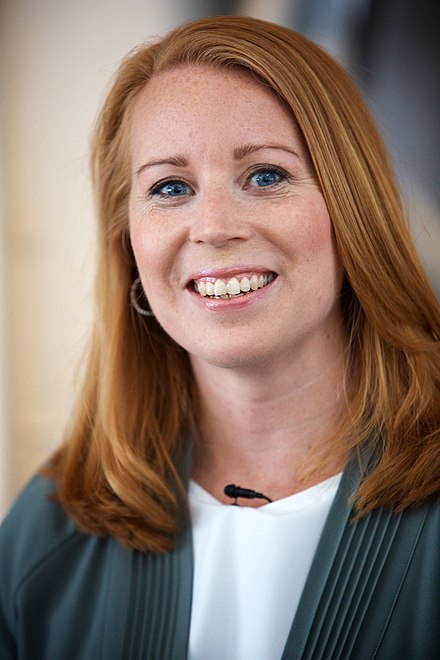 Perhaps, in the euphoria of not losing his job, Lofven momentarily forgot that his feeble administration is completely beholden not only to the whims, not only of the Center Party whose leader Annie Lööf (right) famously said she would  eat one of her shoes rather than serve under him, but also to the Left Party, who are the ideological heirs to Stalin and his Gulags.

As Sweden’s English-language newspaper The Local summarized in its January 21 article: “The Left Party lent its backing [to Löfven’s coalition] only reluctantly, and its leader said repeatedly that his party is ‘prepared to bring down this government’ if they go beyond the ‘clear boundaries’ he said he had outlined to Löfven”

In other words, the power behind Löfven’s throne will be the Left Party leader Jonas Sjöstedt, a 54-year-old former metal worker who used to live in New York. While his wife worked as a diplomat, Sjöstedt occupied his time as an activist in Socialist Party USA and writing such Swedish-language books as Letter to a Brother! Fighter for Spain Bengt Segerson’s Personal Portrayal of the Spanish Civil War.

If a pro-immigration government propped up by such a man doesn’t boost support for the Sweden Democrats, then pretty much nothing will.

Harri Honkanen [Email him] is a student of Scandinavia.