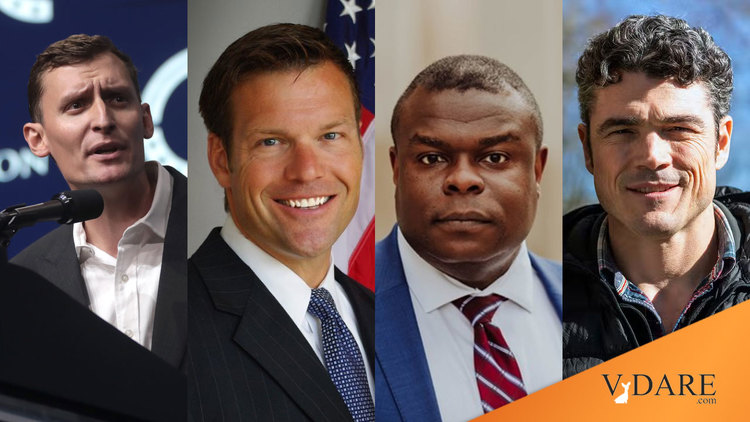 Above: Masters, Kobach, Gibbs, and Kent.

Tuesday was a big primary day and it delivered many victories for America Firsters. Immigration Patriots triumphed over Establishment rivals and showed the GOP/GAP is being remade in the image of Donald Trump (despite all his faults). The next step is for these candidates to prove an America First message can triumph in a general election.

Here’s a breakdown of the most notable contests:

Masters has shown himself to be one of the most promising candidates in the 2022 field. He made immigration a key focus of his campaign. He endorsed immigration restriction and called out the Great Replacement. He made clear that Critical Race Theory is simply anti-white racism. And he dared notice the color of crime. Despite the Leftist Regime Media shrieks, he never apologized  and Arizona Republicans rewarded him with the nomination. Immediately after he won, the New York Times published a shrill column denouncing Masters as “more extreme” than Trump. If the NYT says that, then he must be a great potential senator [The Violent Fantasies of Blake Masters, by Sam Adler-Bell, August 3, 2022].

Lake is not quite Masters-level, but she did present a solid agenda. She focused on the border crisis and CRT. Like Masters, she was endorsed by Trump. She pledges to declare the illegal immigration at the border an invasion and use war powers to enforce immigration laws if she becomes governor [Kari Lake vows to make ‘declaration of invasion’ if elected, by Robert Sherman and Tom Palmer, NewsNation, August 5, 2022]. She vowed to abolish CRT in schools and supported installing cameras in classrooms to catch teachers who spread this noxious anti-white ideology [The Arizona Republican Primary Is Ground Zero for America’s Hysteria Over Critical Race Theory and Drag Queens, by Melissa Gira Grant, New Republic, July 28, 2022].

Lake was a target of a massive Regime Media attack because she questioned the 2020 election and appeared in pictures with alleged “white nationalists” [Trump-endorsed gubernatorial candidate appears with Nazi sympathizer and QAnon-linked activists at campaign events, by Em Steck and Andrew Kaczynski, CNN, November 8, 2021]. Instead of apologizing, she struck back.

Lake shows that the most effective strategy for Republican candidates is to never apologize and attack in the face of Leftist smears [Trump’s pick for Arizona governor renounced her media past. The conversion made Kari Lake a front-runner, by Melanie Mason, Los Angeles Times, August 1, 2022].

If Lake wins the gubernatorial race, it sends a strong message to other Republicans to never back down to enemy assaults.

The Eric who won is Missouri Attorney General Eric Schmitt. Schmitt was more Establishment than his main opponent, former governor Eric Greitens [Republicans race to stop Greitens in Missouri Senate primary, by Max Greenwood, The Hill, July 31, 2022]. The Leftist MSM accused both Erics of endorsing Great Replacement “conspiracy theory.” Both had accurately noticed that the Democrats support mass immigration because it seeks to replace the current electorate with one more favorable to Leftist policies.

Schmitt is one of the leading state AGs fighting back against Biden’s Open Borders policy. He joined the lawsuit that halted Biden’s scrapping Remain in Mexico and continues to wage lawfare against this lawless administration [Schmitt successful in challenge to Biden administration immigration policy, by Kaitlyn Schallhorn, Missouri Times, August 13, 2021].

Schmitt shows that the GOP Establishment is adjusting to the America First moment and adopting a tougher immigration position to win over the base.

Kobach’s record on our issues is impeccable, as VDARE.com readers know. When Republicans championed Amnesty in the early 2010s, Kobach wrote laws and drafted proposals for state governments to crack down on illegal immigration. He was for reducing legal immigration at a time when few Republicans dared mention the subject. His 2020 race for Senator was sabotaged by Mitch McConnell and because Trump, despite Kobach’s early support for him in the 2016 race, did not endorse him.

"Trump won on Kobach’s agenda in 2016. The establishment’s agenda, which is represented by Kobach’s chief rival Rep. Roger Marshall, was soundly defeated in 2016." https://t.co/p5XfxY3IMY

Kobach would make a great state attorney general and would be a major asset in the legal campaign against Biden’s Open Border policies.

While Establishment Republicans claimed Kobach was unelectable in his past races for governor and senator, he won state-wide twice when he ran for Kansas secretary of state. He will likely easily win the attorney general’s job in a Red Wave year.

Meijer was one of the small number of Republicans who pushed for the Farm Workforce Modernization Act, a deceptively named Amnesty that would legalize millions of illegal-alien agricultural workers. He also backed a full Amnesty bill proposed by a handful of Republicans. He was one of the few Republicans who voted to impeach Donald Trump, which of course is why Trump endorsed Gibbs to replace him.

Gibbs advocates reduced immigration across the board and recognizes that the Democrats advocate for more immigration to boost their electorate.

Gibbs is a marked improvement over the cucky Meijer.

Kent made immigration a centerpiece of his campaign and endorsed an Immigration Moratorium. Herrera Beutler, on the other hand, supports various forms of Amnesty and only has a C+ rating from NumbersUSA. She also voted to impeach Trump, which (needless to say) is why the former president backed Kent.

While Kent’s positions make him an Immigration Patriot, earlier this year he strongly disavowed Groyper Wunderkind Nick Fuentes. Kent proclaimed he stands for an “inclusive populism” (whatever that means). This infuriated Fuentes, who has campaigned against him

A Kent victory would be a win for Immigration Patriotism, but not a win for a resolute determination to not cuck. Masters, Lake, and Gibbs are much better on that front.

A big takeaway from these results: Trump (if only by default) is still the leader of the GOP. Of 42 recent endorsements (43 if you count the dual-Eric endorsement), all but one of his picks won [Trump made 42 endorsements in recent primaries. Here’s who won, by Marissa Martinez, Politico, August 3, 2022]. If Kent loses, just two of his picks will have lost.

Even if some political observers claim the former president is fading in relevance, his picks still decide races. Best example: Ohio, where Trump’s endorsement of J.D. Vance made the eventual winner jump 10 points and go from third place to frontrunner.

But Trump’s  endorsements last week—with the exception of not endorsing Kobach—were the right picks.

The new slate of nominees represents a superior version of the GOP. These aren’t Republicans who will say the party must embrace Amnesty to survive or apologize to reporters for saying something “offensive.” These candidates represent a new generation of leaders who will seriously address immigration and fight for the Historic American Nation.

Of course it’s important that most, and hopefully all, win their elections. Otherwise, squishy Republicans will be empowered  to claim America First is a loser and that the party should pick Business First types.

But if these candidates win, they will set the standard for the party for years to come. More candidates will run on Immigration Patriotism and unapologetic America First principles.

After her win, Lake said that her victory “drove a stake through the heart of the McCain machine.” Her CPAC audience roared in approval.

"We drove a stake through the heart of the McCain Machine" pic.twitter.com/McFJXhLngb