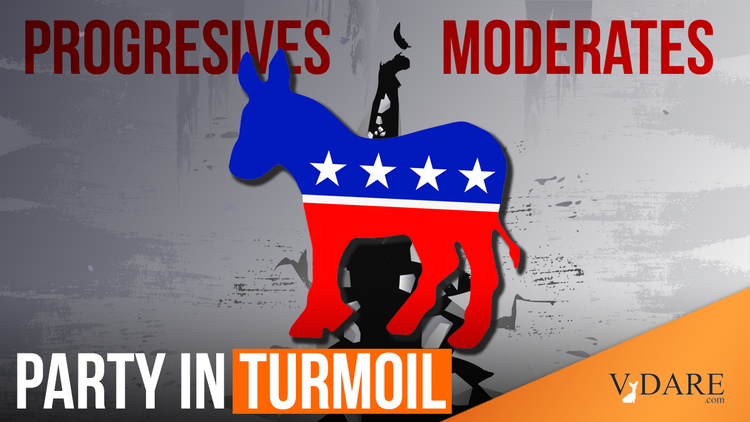 Wayne Allensworth
A+
|
a-

The recent rhubarb in the Democratic Party between “Progressives” and “Moderates” over a sub-par performance in Congressional elections highlighted one of the major divisions within what Steve Sailer calls the “Coalition of the Fringes”—the division between Hard Left socialists and managerial neo-liberals. The post-Americans who want to rule over us apparently can’t get along.

The Hard Leftists, led by the seemingly ubiquitous Alexandria Ocasio-Cortez, known to one and all as “AOC,” don’t like some of the talk they hear from the neo-liberal/globalist “Moderates.” The “Moderates” blame the Hard Left’s “Defund The Police” campaign for the Democrats’ lost seats in the House. As they see it, the much anticipated “Blue Wave” they had hoped for broke up on the shoals of utopian radical positions pushed by the Hard Left.

But AOC and company were having none of that. Squadette Rashida Tlaib (D-Mi) fired back, telling Politico that dropping such anti-police rhetoric would amount to her and her constituents being “silenced”. And AOC herself didn’t want to hear anything but tough talk from her party. She opined that the Dems should “take off our gloves” in dealing with the Republicans. [Tlaib lashes out at centrist Dems over election debacle: ‘I can’t be silent’, by Laura Barrón-López and Holly Otterbein, November 10, 2020]

Meanwhile, Bernie Sanders promised to introduce a Leftist agenda for Biden’s first 100 days in office into the Senate, and Leftists like the “Justice Democrats” and the “Sunrise Movement” mobilized to push their own lists of candidates for cabinet positions.[Progressives unveil Biden Cabinet wish list, by Tal Axelrod, The Hill, November 10, 2020]

This clash between Progressives and Moderates has been a long time coming.

The globalist/managerial class that the Moderate Democrats represent has managed to effectively make use of the Hard Left. The Main Stream Media wing of the globalist Establishment unblushingly conjured up a picture of the Deplorables as a nest of Nazi stormtroopers, with the “literally Hitler” Trump cast as Fuehrer, and pushed a fantastic storyline about “black bodies” being exterminated by fascist police officers. The MSM’s propaganda encouraged the Bolshevik wannabes of AntiFa and the fanatics of BLM to enact their own revolutionary dream by taking to the streets in a violent orgy of destruction, including brazenly attacking Trump supporters, murdering at least two of them.

The Moderates did their part by ritually donning masks—COVID-19 itself has been deemed racist, a weapon in a persistent attack on “people of color”—wrapping themselves in Kente cloths, and taking a knee.

It was quite a spectacle, something that some observers have had difficulty wrapping their heads around—the Starbucks Moderates united with racial socialists in a reign of terror, all in the service of billionaire oligarchs from the Davos politburo.

Just what is the actual nature of the relationship between the fiery Leftist wizards and that man behind the curtain, who looks a lot like George Soros?

The Davos crowd has no interest in an anarchic mob garbed in Castro fatigues trying to run the country, much less the globe. Yet, along with proper media exploitation of the COVID-19 panic, the Hard Left’s shock troops have helped break down resistance to the globalists’ vision of a “Great Reset” of political and economic management [Now is the time for a 'great reset' , by Klaus Schwab, World Economic Forum, June 3, 2020].The globalists just want real power in managerial, neo-liberal hands.

For all the differences between Moderates and the Hard Left, however, both are united by utopian ideals—one bureaucratic in execution, the other essentially anarchic and nihilistic. These apparently strange bedfellows actually share much in common.

Apart from their shared commitment to “blank slate” egalitarianism, both are committed to a program of virtually unlimited mass immigration. On the one hand, mass immigration, especially non-white immigration, is favored by the Hard Left as a means of destroying the “white patriarchy” once and for all. On the other, the Moderates and the globalist oligarchs they serve see the erasure of borders and unlimited movement of peoples as a matter of economic expediency.

Remember, it turned out that Hillary Clinton actually said this in one of the paid Wall Street speeches she tried so hard to suppress.

“My dream is a hemispheric common market, with open trade and open borders, sometime in the future with energy that's as green and sustainable as we can get it, powering growth and opportunity for every person in the hemisphere."[Will Hillary explain her dream of 'open borders'?, by John Kass, Chicago Tribune, October 11, 2016]

And both have deep ideological roots going back to radical movements of the past.

Your humble servant, for instance, once reviewed David Priestland’s magisterial history of Communism, The Red Flag [Who Won the Cold War?, Chronicles, July 2010] From today’s perspective, the most striking thing about the book was Priestland’s description of the struggle within the international Communist movement—a struggle that sheds some light on the relationship between the neo-liberal globalist Moderates and the Hard Left of our own time.

From my review in Chronicles:

Much of the book is devoted to the struggles within the Communist movement between what Priestland calls ‘modernist’/ ‘technocratic’ Marxism and a ‘romantic’ current, revealing a tension between the desire for material abundance (Viewed by the modernist school as achievable only by industrialization, centralization, and bureaucratization) and a utopian vision of society unencumbered by hierarchy and distinctions between individuals, with the “vanguard part” leading the way to perfect equality and, revealing Communism’s bohemian intellectual current, self-realization.

Thus, the tensions between the Stalinists and Maoists, the cult of the Leader of official Communist party propaganda and the t-shirted would-be Che Guevaras’ of 1968. But the two strains co-existed to one degree or another, even in Stalin’s USSR, where the “Man of Steel,” like Mao and Pol Pot in other periods, portrayed the transformation of society and the USSR’s modernization as chiefly an act of will. That romantic view, together with the conspiratorial origins of the party in Russia (a model followed across the globe), fueled the hunt for “enemies of the people,” “self-criticism” and re-education efforts in Mao’s “Great Leap Forward” and “Cultural Revolution,” as well as Pol Pot’s anti-industrialization in the killing fields of Cambodia. Transforming society and human nature required mass terror and social upheaval, whether the goal was modernization or Communist anarchy.

The managerial globalists are thus reminiscent of the technocratic strain in international Communism, and its goal of worldwide bureaucratic rule under the auspices of the party. The globalists would also install a worldwide regime, but one based on international organizations like the WTO and WHO, as well as multi-national corporations. The Antifa/BLM mob represents the anarchic, romantic current on the Left.

Which group is actually the “vanguard” of the global revolution is a matter of one’s perspective, yet their respective goals are very much like the those of, on the one hand, technocratic Communism and, on the other, of the romantic, anarchic Leftists of the past.

Priestland also detected a utopian messianic impulse among both Neo-liberals and Neo-conservatives, and connected the historical dots, identifying neo-conservatism as originating on the left.

That, however, is a story for another time.

So the Hard Left and the Neo-liberal Moderates are relatives, yet the divide between Moderates and Progressives in the Democratic Party is real. And there is a potential for their further estrangement, especially if the managerial elites’ efforts to steal the Presidential election should fail.

That, and/or an effort by the Moderates to rein in the Hard Left, may precipitate a split that could offer our side more room for maneuver.

We must know our enemy to fully exploit such an opportunity, or even understand when one presents itself. And knowing that enemy means understanding the seemingly paradoxical relationship between personalities and organizations as variegated as Nancy Pelosi and AOC, the DNC and BLM.

Wayne Allensworth is a Corresponding Editor of Chronicles magazine. He is the author of The Russian Question: Nationalism, Modernization, and Post-Communist Russia, and a novel, Field of Blood.