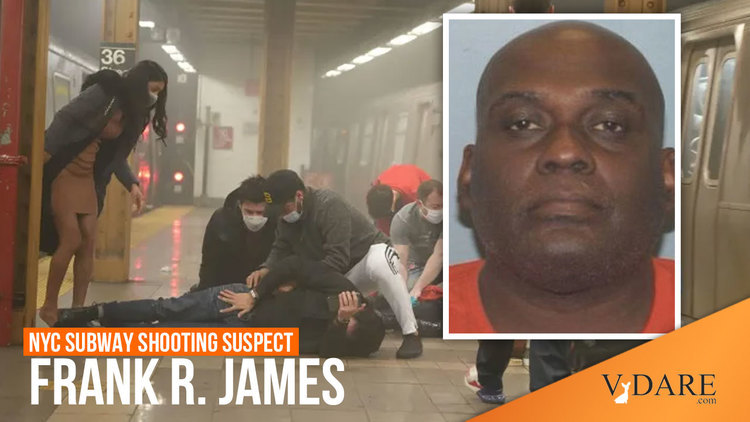 Weird that the media didn’t cite Ketanji Brown Jackson’s height and weight as her most important characteristics. When it came to THE FIRST BLACK WOMAN ON THE SUPREME COURT, it was all about her race. But after a guy shot up a New York City subway car this week, the last thing the media wanted to tell us was his race.

For more than three hours after the attack, we got urgent alerts: Suspect at large! Police request public’s help! Be on the alert for a male, about 5’8″, 160 lbs.

In this particular case, the media’s rule of never telling us the suspect’s race (unless he’s white) was more deranged than usual. This wasn’t a carjacking. It wasn’t a shooting at a block party. It wasn’t an attack on an Asian or Jew. This crime had all the earmarks of a terror attack—smoke bombs, fireworks, a gas mask, and about a dozen people shot while trapped in a subway car.

The police desperately needed the public’s help, but most people were looking for a Middle Easterner.

At least we knew it wasn’t a white guy! If it had been, reporters would have worn out the “W” on their computer keyboards. There would have been rampant speculation that it was a Proud Boy, as top administration officials reminded us that “white supremacy is the most lethal threat to the homeland today. Not ISIS, not al-Qaida—white supremacists.” (President Joe Biden June 2, 2021)

We’re always told “wokeness” is just about being polite and that those who ridicule it are trying to “discredit the claims of traditionally marginalized groups for respect.” (Thomas Zimmer, history professor, Georgetown University) Or they are engaging in “white backlash.” (Seth Cotlar, history professor, Willamette University)

No, wokeness is real. And it can get us killed—when, for example, off the top of my head, a murderous psychopath is on the run and the media refuse to tell us what he looks like.

At the New York Police Department’s first press conference on the subway attack, Police Commissioner Keechant Sewell [Tweet her] came up with an all-new circumlocution to convey the relevant information without saying “black male.” She said: “… we will describe him as an individual, he is being reported as a male black.”

“A male black”! That’s so much better than “black male” when identifying a criminal.

By the time of the evening press conference, Sewell had settled on an even dumber description, calling him a “a dark-skinned male.” Great, so now we’re back to looking for a Middle Easterner. Or possibly Hispanic. Maybe South Asian or mixed race. Definitely NOT “black male” (or “male black”).

The NYPD must have spent all day crafting that new euphemism, because “dark-skinned male” was the exact phrase used minutes later by the chief of detectives, James Essig. “Black” is OUT. “Dark-skinned” is IN.

Biden Appoints First Dark-Skinned Woman (whatever the hell that is) to Supreme Court!

As is well known, the sine qua non of a well-run society is factoring in people’s feelings when reporting important events. And if New York City is not running like a top, then I don’t know what your definition of “running like a top” is.

Instead of subway cameras capturing clear photos of the homicidal brute and being broadcast out within minutes of the attack, hours later, the police were climbing up ladders to physically inspect the cameras. They weren’t working.

New York’s Metropolitan Transportation Authority operates the cameras, but they’ve been VERY busy promoting diversity. Evidently, “Is our equipment working?” has not come up.

Here’s the MTA’s summary of the last meeting:

“The Department of Diversity and Civil Rights will present 3rd quarter 2021 update on MTA Agency-wide EEO and M/W/DBE and SDVOB contract compliance activities.

Another confidence-inspiring development: the New York Times reports that immediately after the shooting, “Toward the front of the train, three victims were being attended to by bystanders. A uniformed police officer approached, asking passengers to call 911 because his radio was not working.” (Emphasis added.)

The officer’s radio didn’t work. But on the plus side, he’s been through six diversity training sessions.

To top things off, at the evening press conference, the top brass COULDN’T GET ZOOM TO WORK. Mayor Eric Adams was introduced, whereupon every TV in the land broadcast total silence for a solid 60 seconds, while city officials stood around waiting for the mayor to appear. They finally gave up and patched him in later.

At least the mayor is on top of things. Hours after even MSNBC had admitted the perp was a black male, Adams was on TV, vowing to catch the man—“or woman!”—who perpetrated this attack.

Gosh, that makes me feel validated.