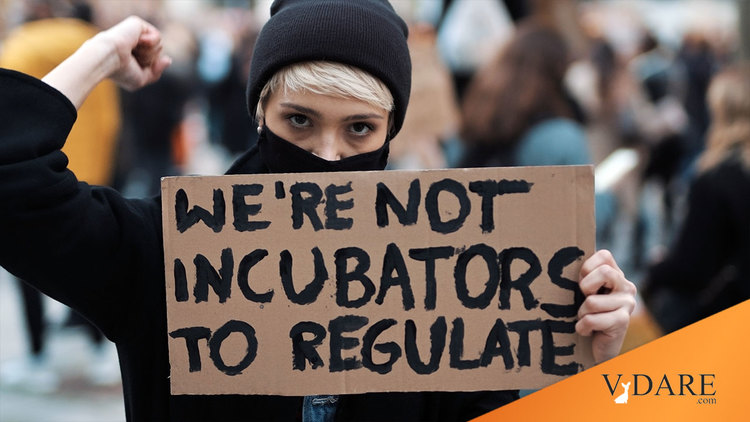 I gather from the recent hysteria that the Supreme Court has just ordered all 72 million American women of childbearing age to get pregnant and carry the baby to term.

This is big news, if true. I’m not at all surprised that every female journalist, activist and politician is threatening to burn down the Supreme Court over its decision last Friday in Dobbs v. Jackson Women’s Health Organization.

On the other hand, even accepting the abortion cult’s belief that members of the weaker sex are incapable of either keeping their knees together or mastering birth control, I still only count about 100,000 women who won’t have easy access to abortion without Roe v. Wade.

Far from restricting abortion, the blue states have begun wildly expanding abortion rights in response to Dobbs—to the extent that that's humanly possible. (Yes, it’s a beating heart, a helpless human being made in God’s image, but I’m not all that grieved about abortions in blue states.)

That means, straight out of the chute, we’re down to only 297,651 abortions per year that are even at risk of being banned after Dobbs.

Flash to thousands of screeching harridans, whose only risk of pregnancy would be if a zoologist inseminated them in a lab, holding signs that say, “GET OUT OF MY UTERUS!”

Also according to Guttmacher, 54% of all abortions already are “medication abortions,” i.e., accomplished with pills given within the first 10 weeks of pregnancy. Good luck trying to ban that: the combined power of federal law enforcement—the FBI, the DEA, Customs and Border Protection and the U.S. military—plus state law enforcement can’t even keep fentanyl out of the country.

So now, we’re down to—at most—136,919 abortions a year that could theoretically be banned post-Dobbs.

We’ve apparently already won an awful lot of “hearts and minds” on abortion—and I’m happy to explain that term to any pro-abortionists who can’t define “beating heart.”

I didn’t even mention that every abortion ban includes an exception to protect the life or (serious) health of the mother (i.e., NOT that I’ll be really depressed if I can’t get this abortion). Always have, and always will. That gives the abortionist a fair bit of wiggle room.

This is the terrifying future that led thousands of abortion hobbyists to rush into the streets last week and scream at us about their uteruses. (Uteri?). All because up to 100,000 ladies won’t be able to get drive-through abortions if they have unprotected sex with men they don't want to have children with, and they didn't notice that they live in Louisiana.

Maybe their unaborted kids will be better at math.

The loons have also introduced a new phrase into the abortion debate (already elevated by such precise terminology as “choice”): “Abortion care.” See, if I’d been at the meeting where it was announced, OK, everybody! We’re going to start calling it “abortion care,” I’d have said, “I’m sorry, that’s too preposterous.”

Consistent with liberal psyches, the attack on the Supreme Court last week was completely schizophrenic --

Thursday: HOW DARE YOU TAKE AWAY STATES' RIGHTS ON GUNS!

Friday: HOW DARE YOU GIVE US STATES' RIGHTS ON ABORTION!

[ANSWER: One’s in the Constitution, and one isn’t.]

In one breath, abortion enthusiasts tell us women of color will be hit hardest by the court ruling allowing states to ban abortion. That’s true in a sense: according to the latest figures from the C.D.C, in 2019, 33% percent of women seeking abortions were white, 38% black and 21% Hispanic. Per capita, that’s a lot more black and Latino babies being aborted than white babies.

But then in the next breath, they say opposition to abortion is rooted in white supremacy! Yes, that’s a big rallying cry at the white supremacist rallies: DON’T KILL BLACK BABIES!

As I noted after the freakout over the leaked abortion opinion a couple of months ago, no matter what people think of abortion, unleashing these shrews on the public is not helping Democrats.

Oh, wait—the Democrats agree with me. After allowing the ladies a three-day struggle session over the weekend, on Monday, the Jan. 6 committee suddenly announced an immediate return to the hearings. It was an emergency! They had a surprise witness.  This could not wait.

MAJOR UPDATE FROM BOMBSHELL WITNESS AT TUESDAY’S HEARINGS: Trump is still a douchebag.

In three days, we went from It’s a Christian cult on the Supreme Court!  My Body, My Choice! This is like slavery! to... What abortion decision? Let’s talk about Trump!